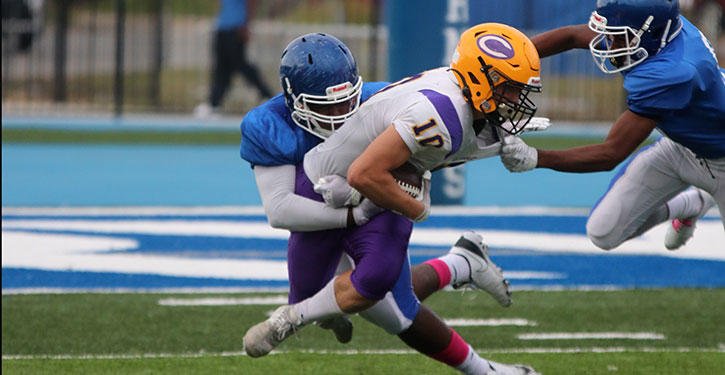 Scoring on every possession spurs Bryant freshmen past Catholic

The Bryant Hornets freshman team scored on all six of its possessions Thursday night on the way to a 42-7 romp over the Little Rock Catholic Rockets on Everett Field at Hornets Stadium.

The Hornets improved to 6-0 on the season, 5-0 in the Central Arkansas Junior High Conference going into a non-conference game next Thursday against El Dorado. On Oct. 22, the Hornets travel for a showdown with Cabot South, which remained unbeaten as well with a 6-0 non-conference win over Benton.

While the Bryant offense was amassing 383 yards, the defense held Catholic to just 108 for the game with 78 of that coming on the Rockets’ scoring play. At halftime, Catholic had a net of just 11 yards.

Bryant’s Gideon Motes completed 7 of 8 passes for 187 yards and two touchdowns. The Hornets rushed for 144 yards with seven backs contributing. James Martin ran for two scores and Jaden Ashford had one.

The Hornets were way behind the sticks on their first drive. A holding penalty had them in a first-and-22 hole at the Rockets’ 31. Ashford dashed for 17 yards to set up a reasonable second-and-5. But Motes found Mytorian Singleton on a post route. When Singleton split the defenders, he went the distance, 52 yards for the score.

Catholic went three and out to start the game thanks in large part to Gavin Lewis’ tackle for a 4-yard loss on first down.

On the Rockets’ second possession, Sebastian Oltmans stopped a first down run then Lewis made a tackle for another loss when Catholic quarterback Cody Fogleman hit Brooks Ward with a swing pass.

Backed up to their own 9, the Rockets punted, and the Hornets had great field position at the Catholic 40. Trickey caught an 8-yard pass, Motes ran a quarterback draw for 12 and, after Martin picked up 5 to the 15, he scored on the first play of the second quarter.

With the help of a penalty, the Rockets picked up their lone first-half first down. But another stop for a loss by Lewis then, on a third-and-2, a 5-yard loss on a tackle by Oltmans, forced another punt.

Backed up to their own 35, the Hornets scored in one play. Motes threw deep to Trickey who was well covered. But the receiver reached up over the defender and hauled in the pass on his way to the end zone.

The Rockets’ next punt was a short one and gave the Hornets possession again, just 35 yards away from more points. Singleton hauled in a 23-yard pass, but a holding penalty moved the Hornets back a play later. On second-and-14 at the 16, Ashford slashed for a first down. On the next play, he bashed through for the touchdown with 1:05 left in the half.

Bryant’s Alex Martin made tackles for no gain on each of the last two snaps that the Rockets could muster.

The Hornets got the ball to start the second half and promptly rolled to another touchdown to make it a mercy-rule lead at 35-0. Singleton caught a 34-yard pass that had a personal foul penalty tacked on. A play later, James Martin scored from the 12.

A play into the next series for Catholic, Fogleman tossed swing pass to Dominic Keeton, who showed his speed as he out-raced the Hornets to the end zone 78 yards away. Will Aaron added the extra point to make it 35-7.

Bryant got the ball back with 3:45 left in the third quarter and Aiden Hughes and the second team on the field. They methodically drove for a final touchdown, eating up a big chunk of clock.

Ashford started the drive with his last carry of the night, a 29-yard jaunt. Two plays later, however, the Hornets faced a third-and-6. But Hughes tossed a 15-yard pass to Jaylen Ryland to keep the march going.

A pair of penalties followed, putting the Hornets in a first-and-27 hole. Hughes kept for 13 yards and, on third down, passed to Aaron Granado for 24 yards and a new set of downs.

Jase Ham ran for 7 yards, but a pair of lost-yardage plays followed. On fourth-and-8 at the 13, Hughes passed to Ham for the touchdown.

Chandler’s kick made it 42-7 and by the time the Rockets set up on offense after the kickoff, there was just 2:28 left to play. They picked up a first down before, on the last play of the game, Granado made an interception.