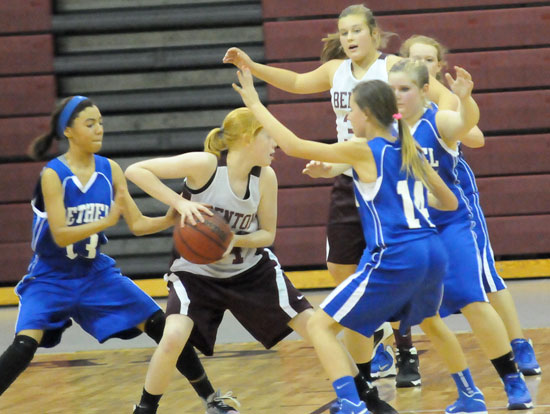 BENTON — With three minutes left in the third quarter, the Bryant Blue Lady Hornets eighth grade team of Bethel Middle School found themselves trailing the Benton Lady Panthers 19-10. The Lady Hornets hadn’t led since it was 2-0. 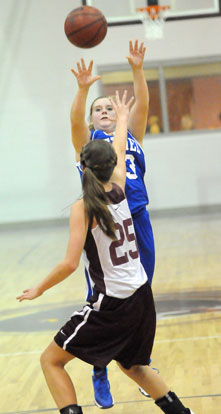 Stephanie Cullen fires a shot over a Benton defender. (Photo by Kevin Nagle)

But, on consecutive trips up the floor, Raija Todd drilled 3-pointers, cutting the margin to 3. A steal by Daniele Singleton led to a layup for Todd and it was 19-18 going into the fourth quarter.

Singleton made another theft and fed Todd who scored once again to complete a 10-0 run for her and the Lady Hornets, who found themselves ahead 20-19.

Another Benton turnover led to a basket by Singleton, increasing the margin. And when Raelae Benton swiped the ball and Singleton cashed that in, it completed Bryant’s 14-0 run.

The Lady Hornets went on to forge a 28-21 come-from-behind victory at Panther Arena.

Trailing 24-19, the Lady Panthers managed their lone fourth-quarter basket with 3:12 to go but Todd made a couple of steals leading to a basket by Raelae Benton and a layup for Todd herself to cap off the win.

The win improved the Lady Hornets to 2-0 on the season going into the Thanksgiving break. They’re scheduled to return to action at the Wildcat Shootout at Little Rock Episcopal Collegiate on Monday, Dec. 2, at 6 p.m., against Lighthouse Charter School. 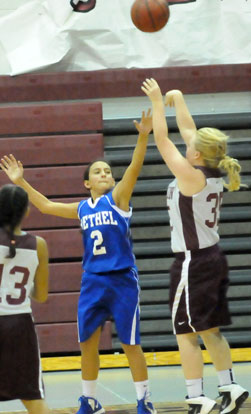 Todd opened the scoring in the third quarter with a drive to the hoop but a 3-point for Benton produced the 19-10 lead that disappeared by the end of the period. 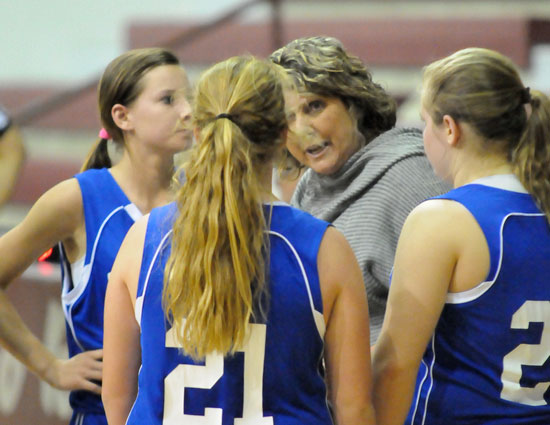 Bethel coach Rhonda Hall talks with Baylee Rowton (21) and her Lady Hornets during a timeout. (Photo by Kevin Nagle)