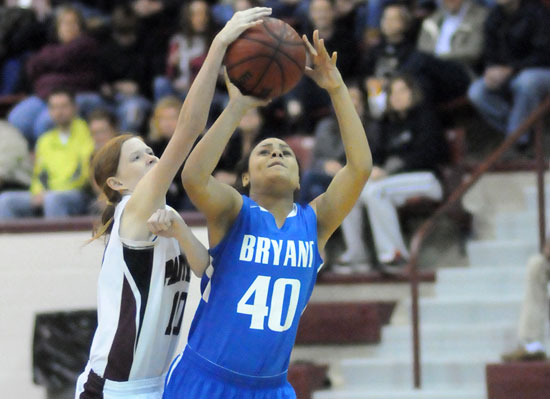 BENTON — Led by Destiny Martin who was 6 for 6 from the field, the Bryant Lady Hornets freshman team scorched the nets at a 63 percent clip in the first half, bolting to a 21-4 lead over the Benton Junior Lady Panthers Monday night. 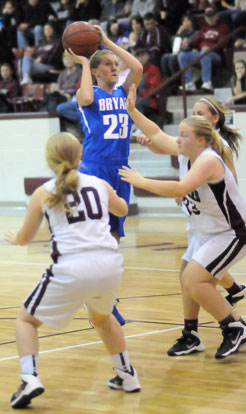 Kendal Rogers launches a shot over a pair of Benton defenders. (Photo by Kevin Nagle)

The strong start led to a 28-14 win over their rivals as they improved to 3-3 on the season going into the Thanksgiving break. They’ll return to action at home in the Bryant Middle School gym on Monday, Dec. 2, against Lake Hamilton.

Martin scored all 12 of her game-high point total in the first half. Kendal Rogers finished with 5, Riley Hill 4. Sarah Kennedy, Deja Reyford and Reagan McCormick each had 2 with Bethany Hutchison adding a free throw.

While the Lady Hornets were filling up the nets, Benton struggled, going 1 for 10 in the first quarter and 2 for 15 in the first half. The Lady Panthers wound up 5 of 37 (14 percent) against the scrambling Bryant defense.

The onslaught commenced with a 10-0 run to open the game. Martin scored on the first possession driving into the lane and hitting a short jumper. Moments later, she fed Kennedy who knocked down a baseline jumper. Martin added a pull-up jay to make it 6-0 and Benton needed a timeout.

When play resumed, however, the Lady Hornets forced a turnover and Rogers fed Hill for a basket to make it 8-0. Martin capped the run with a drive to the hoop and Benton took a second timeout to try to stem the tide.

A basket by Ashlyn Alexander put the Lady Panthers on the board with 1:40 left in the first quarter. But another drive to the hoop by Martin and another bucket by Hill off an assist from Rogers made it 14-2 going into the second quarter. 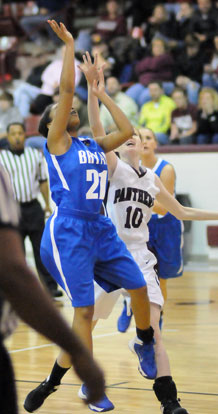 Martin got to the rack again to start the scoring in the second stanza, making it 16-2.

Benton’s Bre Hunter interrupted but Hill fed Martin for a basket and Rogers turned in a three-point play to make it 21-4.

Free throws by Trae Gardner and Grace Bryant made it 21-6 at the half.

Things slowed down for the Lady Hornets in the second half. Rogers had the lone field goal of the third quarter but Bryant still led 23-9 going into the fourth. McCormick hit a jumper off another assist from Rogers to open the final period. After Gardner hit a free throw for Benton, Rayford canned an eight-footer and Hutchison hit her free throw to give Bryant its largest lead at 28-10.

Laura Hopper and Alexander scored the final points of the game in the final minute. 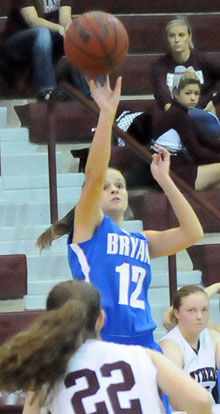