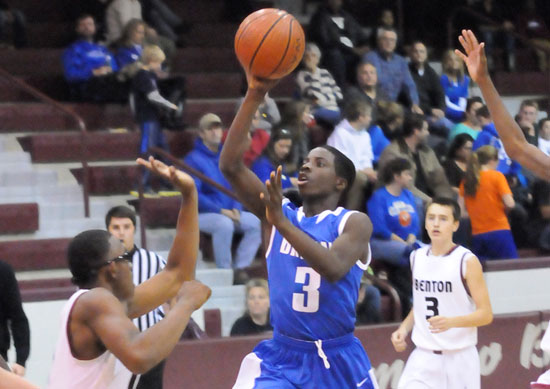 BENTON — Round two goes to the Hornets. 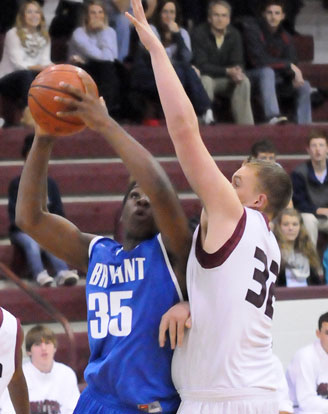 John Winston (35) looks to get a shot over Benton’s Westin Riddick. (Photo by Kevin Nagle)

Still smarting from a 55-46 loss to the Benton Junior Panthers in the semifinals of their own Bryant Invitational Tournament, the Bryant Hornets freshman team got another shot at Benton on Monday night. And playing stifling defense, they came away with a 35-22 win at Panthers Arena.

The two teams will play at least once more at Bryant on Jan. 23, 2014. They could play a fourth time when the Central Arkansas Junior High Conference Tournament is held in Conway, Feb. 17-21.

In the previous meeting, Benton hit 28 of 38 free throws. This time, the Panthers got to the line for only 12 shots, making just five. Bryant forced 15 turnovers and held Benton to 30 percent shooting from the floor (8 of 27).

“I thought we really set the tone defensively from the go,” said Bryant coach Tyler Posey. “We got after them hard, built a big lead and we never really let up. I’m really proud of the way our guys responded. Last time, we did a good job in the first half but this time we did much better, a complete game and it showed in the score.”

After scoring 18 points in the Panthers’ win, Westin Riddick was held to 2 on Monday. Posey credited the defensive work of Marvin Moody. 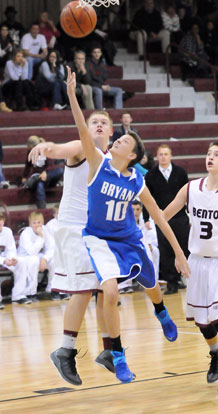 Garrett Cowart (10) scoops up a shot under the basket. (Photo by Kevin Nagle)

“I made a little switch and put Marvin on him,” acknowledged the coach. “He’s a little more athletic. I really think he did a very good job on him. We limited him.”

Calvin Allen led the Hornets with 14 points. Moody added 7 and John Winston 6. Brandon Harris and Kaleb Turner finished with 3 each and Kyle Sahr had a bucket. Christian McIntosh led the team with five rebounds as the Hornets out-boarded the Panthers 22-14.

Benton scored the first 3 points of the game. Fred Harris, who led the Panthers with 9 points and eight rebounds, dropped in a jump hook then Jai Peters hit a free throw.

But the Panthers didn’t score again the rest of the first quarter. Two free throws by Allen broke the ice for the Hornets at the 3:21 mark. Moody gave Bryant the lead with a drive then took a kickout from Garrett Cowart and drained a 3. When Cowart made a steal and fed Allen for a layup, it was 9-3 and Benton called timeout.

A turnover when play resumed led to a spinning drive for a hoop by Allen. In the final 15 seconds, Sahr scored off the offensive glass to make it 13-3.

Cowart got another assist on a 10-foot jumper by Winston to open the second half. Brandon Harris nailed a 3 then Allen hit a layup off a Benton turnover to bump the margin to 27-9.

After a Panthers’ timeout, Fred Harris hit another free throw. But Winston hit a short jumper and the Hornets had their largest lead of the game at 29-10. 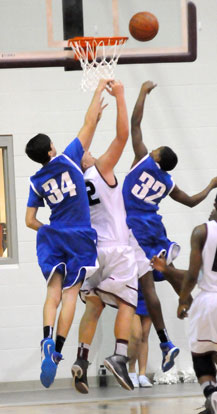 Bryant’s Kyle Sahr (34) and Jonathan Allen (32) contest a shot under the basket. (Photo by Kevin Nagle)

Brandon Hunter scored on an inbounds play for Benton and the Panthers started a comeback. By the end of the third quarter, they were within 30-18 with Peters hiting a 3 and following with a jumper from 12-feet out.

Fred Harris’ basket off the offensive glass with 4:20 left in the game, made it 30-20 but that’s as close as the Panthers would get. Moody canned an eight-footer then the Hornets began to whittle on the clock. Allen hit a free throw and, after Fred Harris scored for Benton, Winston closed out the scoring with a layup off a feed from Moody.