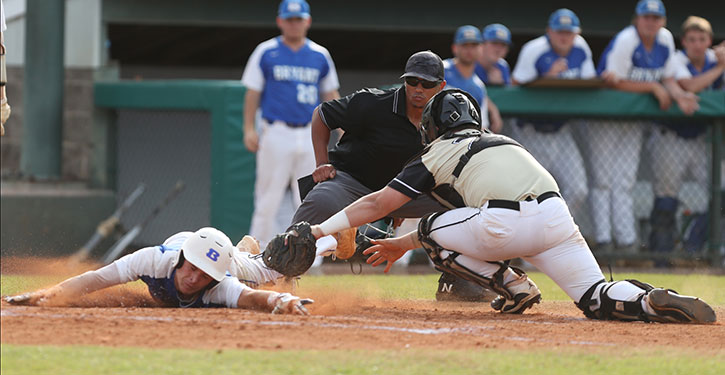 Turner Seelinger fired a five-hit shutout as the Bryant Hornets bounced back from a disappointing loss to Bentonville West on Thursday with a 5-0 win over the Jonesboro Golden Hurricane at Bryant High School Field on Friday.

Bryant hosts Sheridan, champions of the 5A-South Conference, on Saturday at noon.

“Jonesboro is a great offensive team,” acknowledged Hornets head coach Travis Queck. “They have some arms. We saw a couple of them today.

“First, I appreciate them driving down for this game last second,” he added. “They’re a very, very quality opponent. We knew what’s been said about them. We were excited to play them.

“But we knew what kind of approach that they were going to bring to the field, and it wasn’t going to be a small-ball approach. It was going to be ‘Let’s see how far and how hard I can hit the ball. And they hit the ball hard and far a few times but our yard plays very big.”

“Early on, he dabbled,” Queck said of his ace. “He played around too much trying to avoid some things. We just finally said, ‘Dude, let them hit it. Let’s make them hit it and see what our defense can do.’ And, how about that? Our defense made some just big-time plays.

“That’s who we are, and we’ve got to understand that,” he added. “Pitching and defense.”

Seelinger struck out only three but, at one point, retired 10 batters in a row. He walked the ‘Canes’ lead-off batter Dawson Wagner, who stole second and when to third on Ty Rhoades’ tap to the mound. But Seelinger got two of his K’s in the inning.

In the second, Jake Williams led off with a single, but Sawyer Bentley hit a sharp grounder to Martin, who started an around-the-horn doubleplay.

A walk to Josh Hyneman followed but he was left at first.

Cross Jumper singled with two out in the third but that was the last Jonesboro baserunner until the seventh.

In the meantime, the Hornets grabbed a 1-0 lead in the first when Riggs singled and Ledbetter doubled. The ball wasn’t fielded cleanly in left by Will Barre’ and Riggs was able to score. As it turned out, he would’ve scored anyway as Davis followed with a long fly to right center that would’ve served as a sacrifice fly.

In the third, Blaine Sears cracked a single up the middle and stole second. Riggs beat out a bunt single then Ledbetter’s grounder to short was booted by Rykar Acebo, who was thinking doubleplay as he moved to his left to try to field the ball.

With Riggs at second and Ledbetter at first, a wild pitch moved them up then an errant pickoff throw from catcher Rhett Hossman allowed both of them to score — Ledbetter on a close play at the plate.

Brennan Payne, the Jonesboro starter, responded by striking out the side.

That started a stretch in which Payne and the Hurricane defense set down nine in a row. So, the score was 4-0 going into the bottom of the sixth when Bentley relieved and Davis greeted him with a drive to the wall in left-center for a triple. Garret Wilson singled him home to make it 5-0.

Wilson advanced to second a wild pitch then started to try to score on Martin’s single to left. But when Wilson stopped between third and home and tried to get back to the bag, he was tagged out. Martin, who wound up at second was picked off by Bentley as he fell behind 2-0 to Logan White.

Jonesboro did not go quietly in the seventh. Hosman beat out a single that Davis fielded deep in the hole at short. But courtesy runner Will Thyer was thrown out trying to steal and Williams flew out to right. Bentley and Hyneman each singled through the left side but Seelinger closed it down when Payne popped out to Sears in center.

Queck was proud of the way his team bounced back.

“We always have this conversation after a loss,” he related. “This is what the common factor is in the four losses we have — which were by one, three, one and two runs — that we weren’t as focused or intent on making things happen. We weren’t the aggressor.

“We’ve got to do what we do best and that’s staying focused, playing hard and just the attention to detail.

“I didn’t know how these guys were going to react,” he continued. “When we left the game last night — and it’s a sick feeling to lose that way — the sense in me was not to be concerned about these guys. They rise to the occasion but, this time of year, the occasion is every game and that’s what we’ve got to get across to these guys.

“You know, we lost almost all of last year (due to COVID-19) and the year before we dropped one (in the first round at State),” Queck concluded. “Maybe that’s what we’ve got to continue to focus on for us to have success in the playoffs and here on out, to finish this thing out the way we want to.”