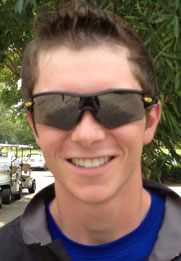 SIBLINGS: No. I’m an only child.

FAVORITE MOVIE: I don’t have one.

FAVORITE TV SHOW: I don’t have one.

FAVORITE TOY WHEN YOU WERE A LITTLE KID: I had a little remote control car.

WHAT ARE YOUR PLANS AFTER HIGH SCHOOL? I’m going to go to A-State for two years for basics and then to the U of A for architecture.

OTHER THAN YOUR PARENTS, WHO’S HAD THE BIGGEST INFLUENCE ON YOUR LIFE? HOW? Probably my grandfather. He’s taught me a lot of the stuff that I know, not just in golf.

WHAT’S YOUR FAVORITE THING ABOUT GOLF? I like competing against other people.

WHAT DO YOU THINK OF THE SEASON SO FAR? We won three straight matches. We lost Monday. I didn’t get a chance to go because I was injured but, hopefully, I’ll be back next Monday We’ve had a really good season so far.

WHAT’S BEEN THE HIGHLIGHT TO THE SEASON SO FAR? When we won our first match, we beat Benton by 23 and Lake Hamilton by over 30.

WHAT’S IT GOING TO TAKE FOR THE TEAM TO BE SUCCESSFUL THE REST OF THE SEASON? Consistency.

TALK ABOUT YOUR GAME NOW; WHAT ARE YOU MOST CONFIDENT IN YOUR ABILITY TO DO? I’m coming off a back injury from a car wreck over the summer and I’ve got to get back to where I’ve got my same swing and same tempo.

WHAT’S YOUR FAVORITE CLUB? Probably a six iron. I usually don’t have to hit it hard and I usually hit it right where I want it every time.

WHEN YOU’RE THROUGH PLAYING GOLF FOR BRYANT HIGH SCHOOL, WHAT DO YOU THINK YOU’LL LOOK BACK AND REMEMBER MOST FONDLY ABOUT THE EXPERIENCE? I’ll probably remember last year’s team with Tyler (Green) and Austin (Harmon) and Drew (Castleberry). That was probably one of the best teams Bryant’s had in a long time. Every match and every tournament was always great.