RUSSELLVILLE — Jennifer Duncan, new coordinator of Greek life at Arkansas Tech University, hopes to build upon and sustain an environment where Tech students involved in sororities and fraternities find the same opportunities for personal growth that Greek life provided for her. 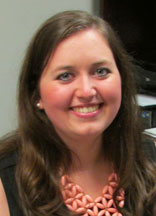 “I honestly do not think I would be who I am today without my Greek life experience,” said Duncan. “My sorority is the reason I became interested in higher education as a career. The life skills that I’ve learned from being a member of a sorority and from working in this field are a big part of who I am. Event planning and working with people on their challenges have become second nature.”

The opportunity to remain in the state of Arkansas was attractive to Duncan when she learned of the career opportunity in Greek life at Arkansas Tech.

“I was really excited about the fact that it was close to home,” said Duncan. “Also, the fact that it was a situation where I would have the opportunity to oversee all aspects of the Greek community rather than just one council was intriguing. I knew that I could come in and work on things that would allow us to take Greek life at Arkansas Tech to the next level.”

Duncan has found a supportive group of colleagues during her first month on the job.

“One of the biggest strengths of Arkansas Tech to me is the alumni support that exists in the community and on campus,” said Duncan. “I think it is awesome that so many faculty and staff members have been involved with Arkansas Tech for an extended period of time. There are people who can provide me with a perspective on where Greek life has been and ways that we can reach our potential in the future.”

Among Duncan’s goals for the 2013-14 academic year are to foster growth among all Greek organizations, aid sorority Alpha Sigma Tau in making a successful return to the Arkansas Tech campus after being absent for almost 30 years and ensure that participants in Greek life gain the full benefits of the experience.

“The biggest role that Greek life can play on a college campus is identifying leaders,” said Duncan. “Through membership in a fraternity or sorority, you get to know a greater variety of people and it really opens you up to experiences you might not know about. Also, the community service and philanthropy portions are so important to who are organizations are and who our members become.”