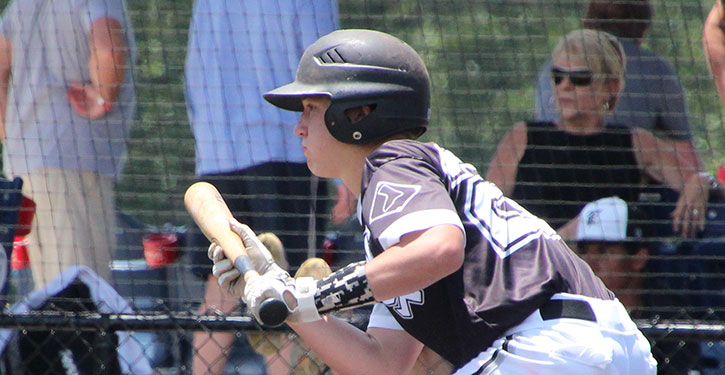 With two outs in the bottom of the fourth, it felt like the Bryant Black Sox Senior American Legion team was in the middle of another close, low-scoring battle, a scenario that had not been that good for them so far this season.

Aaron Orender, the Sox’ starter on the mound had held the hard-hitting Sheridan McCoy-Tygart Yellowjackets Senior team to just one run and, when he got into a bases-loaded jam in the fourth, Christian Harp came on to get out of it with the score still 1-1.

The Jackets and right-hander Jace Phillips retired the first two in the bottom of the fourth on just three pitches. But Alex Shurtleff smacked a one-hop rocket to the left of Sheridan second baseman Hunter Hicks who could only try to knock it down as it went by. Though he got a glove on it, the ball got through and into right-center for a single.

A pitch later, Coby Greiner laced a single to center to set the table for Scott Schmidt. The count went to 1-2 then Schmidt yanked a single to left to plate Shurtleff, snapping the tie.

Jake East  followed with another RBI single and when the throw from the outfield to third was too late and not cut off, East hustled into second.

Up 3-1 with two in scoring position, the Black Sox’ crowning blow came from Seth Tucker. Just moments after the Sheridan coaches had moved right-fielder Austyn Wright more toward center, Tucker lined one down the right-field line for a two-run double that made it 5-1.

Harp, with relief help from Tucker, made that hold up for the final score as the Sox broke a two-game skid and earned their first Zone victory.

Though Sheridan out-hit them 8-7, the Sox’ hurlers repeatedly worked out of trouble with the help of solid defense. The Jackets stranded 10.

“Harp was a pleasant surprise,” he mentioned. “He was kind of our emergency guy if Orender was in the middle of an inning. He went out there and threw strikes.”

Bryant improved to 4-3 overall this season going into the 2017 Katzer Tournament, hosted by Fort Smith Sportsman. They’re set to open pool play tonight at 6 p.m., against the Three Rivers Bandits. On Saturday, they’ll take on the Arkansas Titans at 3 and the River Valley Tropics at 8 p.m. Bracket play will be Sunday.

Sheridan’s first two batters in Thursday’s game each singled. But Orender got Hicks to ground into a doubleplay. With Chance Wallingsford at third, David Rainwater grounded out to Tucker at third.

Phillips hit Tucker, who was on base all three times he came to the plate, in the bottom of the first but he was stranded.

In the second, Sheridan’s Nick Whitley doubled with one out and Justin Pruitt walked. Wright reached on the lone error of the game, loading the bases. But Orneder fanned Phillips to bring up Wallingsford. On a 2-1 pitch, Wallingsford ripped a line drive up the middle that, somehow, Orender caught as he was trying to get out of the way. That play saved two runs.

Both teams scored in the third. Sheridan’s tally came on doubles by Hicks and David Vilches. For Bryant, East, who was 2-for-2, lashed a single into right-center. He then stole second before Tucker worked a walk. Dylan Hurt followed with a shot up the middle for an RBI single.

The Sox might’ve gotten more but Hicks robbed Logan Allen of a hit with a leaping grab of his line drive.

The Jackets threatened in the top of the fourth. Pruitt and Wright singled to start the inning. After Orender struck out Phillips, Wallingsford walked to load the bases.

With his pitch count at 65 and it being Orender’s first outing on the mound this season, Harp was brought on to try to get out of the jam. And he did. Nathan Kirkpatrick hit a sinking liner that Schmidt caught at second. He whipped a throw of East, covering the second-base bag, for an inning-ending doubleplay.

That set up Bryant’s game-breaking outburst in the bottom of the fourth.

Harp pitched around a lead-off single by Hicks in the top of the fifth. In the sixth, there were two out when he struck Phillips with a pitch and walked Wallingsford. Tucker came on in relief and struck out Kirkpatrick to thwart Sheridan again. He needed just six pitches in the top of the seventh to close out the victory. 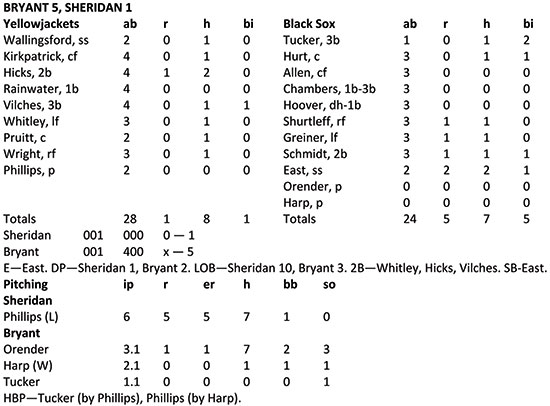