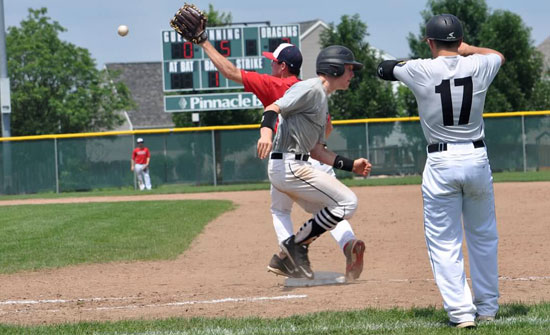 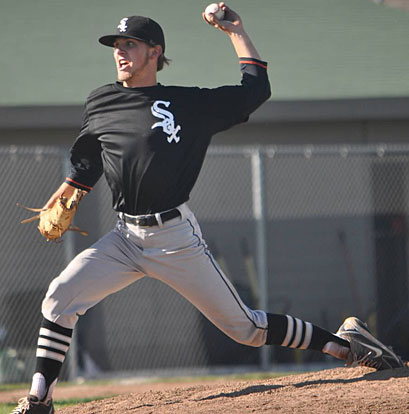 OMAHA, Neb. — By the end of the third inning, the Bryant Black Sox Senior American Legion team and Post 70 of Troy, Ala., were deadlocked in a 7-7 tie in the quarterfinals of the annual Battle of Omaha. In the seventh, a hit batsman and a one-out gapper to left center gave Troy the lead and when they set down the Sox in order in the home seventh, Bryant’s bid to advance was denied.

The 8-7 loss ended the Black Sox’ run at the event after they’d swept all four games in pool play by a combined score of 29-3. They then won their opener in bracket play, 8-0, over Pius X of Lincoln to set up the contest with Troy on Sunday, June 21.

The Sox are now 12-3-2 on the season as they prepare to play in The Hagan Memorial Tournament in Memphis starting Friday, June 26. 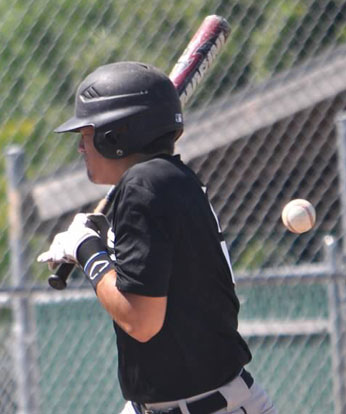 Austin Kelly gets hit by a pitch. (Photo courtesy of Samantha Breeding)

The Sox’ success came despite the fact they were without starters Drew Tipton, Connor Tatum, Nick Kehrees and Blake Patterson.

Evan Lee had three hits, Trey Breeding, Garrett Misenheimer and Seth Tucker two each for the Sox who grabbed a 2-0 lead in the bottom of the first after starter Devin Dupree pitched a scoreless top half.

With one out, Dylan Hurt walked to start the Black Sox’ uprising. Lee singled and Jason Hastings was hit by a pitch to load the bases. Base hits by Breeding and Misenheimer each drove in a run.

Troy tied it in the top of the second on a two-run homer by Tyler Sheehan. In the home half of the frame, the Sox regained the edge when Logan Allen reached on a third-strike wild pitch, advanced to second on an errant throw and scored on a two-out single to left by Lee.

But Troy erupted for five runs in the top of the third, taking advantage of three walks with three hits including a double by Christopher Simon after Austin Kelly had relieved Dupree.

And Bryant took its turn in the home third, sparked by Breeding’s lead-off double. Misenheimer singled and, with one out, Tucker plated a run with a single. Allen kept the uprising going with a base hit and Brandan Warner drove in a run with a grounder to second. That set up a two-run single by Hurt to make it 7-7. 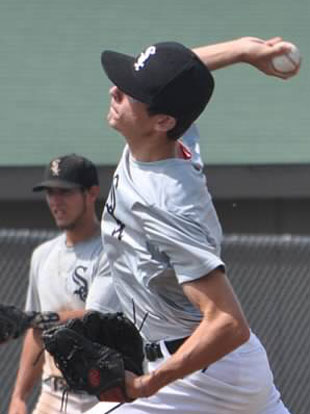 Kelly settled in to shut out Troy in the fourth, fifth and sixth, giving up just two hits. But the Sox were shackled as well. Breeding walked in the fourth but was stranded. Tucker singled and took second on a sacrifice only to be left on in the fifth. In the sixth, Lee singled and Misenheimer walked but Troy escaped with the game still tied.

In the seventh, Rush Hixon drew the one-out walk and scored all the way from first on Dustin Jordan’s double. After a walk to Zack Lightsey, Alex Shurtleff relieved for Bryant. Breeding threw Jordan out when he tried to steal third then Shurtleff struck out Trace Johnston to end the inning.

Zack Jackson fired a three-hit shutout over five innings with one walk and six strikeouts while the Sox scored in each of their four at-bats. Hurt, Lee, Breeding, Tucker and Allen each had two hits.

It was 2-0 after the first. Hurt singled and Lee doubled him to third. With two down, Breeding singled in Hurt and Misenheimer singled in Lee.

In the second, Jackson worked around a one-out single and the bats produced three more tallies with Allen igniting the uprising with a single to right. Warner ripped a double inside the bag at third. Hurt’s base hit drove in both. Lee reached on an error and, after Hastings sacrificed, Breeding cracked an RBI single to center to make it 5-0.

Lincoln managed to get a runner to third in the top of the third frame on a third-strike wild pitch, a balk and a groundout but Jackson got the third out to keep the shutout intact. 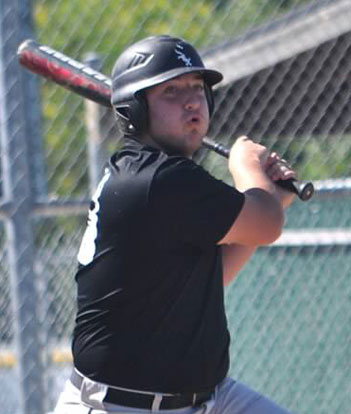 In the home half, Tucker slapped a single to right then Allen lashed a triple to the opposite field to make it 6-0. Warner’s sacrifice fly got Allen home.

Pius managed a two-out single and a walk in the fourth but both runners were stranded. In the bottom of the inning, Hastings drilled a double to right-center, Breeding walked and Tucker singled. With two down, a wild pitch got Hastings home.

Jackson fanned two in the top of the fifth to help work around a two-out single.

Warner went 4 for 4, Lee had three hits and Breeding two to support the pitching of Shurtleff and Tucker who combined to combined on a two-hitter. The lone hit against Shurtleff over the first three innings was a lead-off double in the bottom of the first. The only run for the Blues came in the fifth, contributing to their lone run. That effort was aided by two walks and an error.

Bryant’s offensive included four-run bursts in the second and fourth.

In the opening frame, Warner singled and sprinted to third on a one-out knock by Lee. A passed ball allowed him to score.

Shurtleff pitched around the hit and a walk in the bottom of the frame. 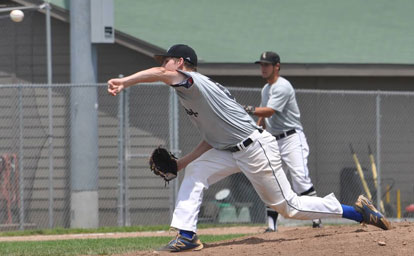 The four-run second started with a single by Misenheimer. After a passed ball, Tucker singled and Allen squeezed in the run. Warner made it 3-0 with a double. He stole third and home to make it 4-0. Hurt walked and scored when Lee drilled an RBI triple.

Breeding singled to start the third and reached third base on a pair of passed balls. Kelly singled him home to make it 7-0.

In the meantime, Shurtleff pitched around a two-out error in the second. In the third, a hit batsman with one out was erased when the Sox turned a doubleplay.

Tucker took over in the fourth and worked a 1-2-3 inning. That came after another outburst by the Sox in the top of the fourth. Warner led off with his second double. Singles by Hurt and Lee brought him around. Hastings singled to load the bases for Breeding, who cleared them with a double to cap off the scoring. 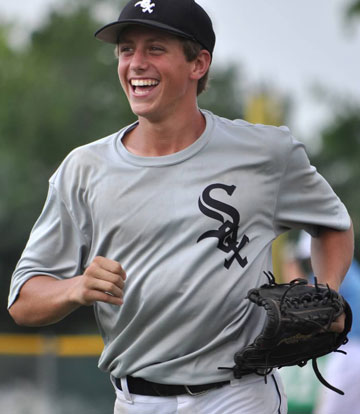 A walk, a single and a walk loaded the bases for Morehead in the bottom of the fifth. Tucker got a strikeout then induced a grounder to Warner at third. He fired home for a force but a throw to first to try to end the game with a doubleplay was errant allowing the run to score.

After another walk, Tucker ended the game with a strikeout.

Beaux Bonvillain and Warner combined on the shutout. Bonvillain allowed just two hits over the first five innings while striking out 10 and walking just two then Warner retired six of the seven batters he faced, working around a two-out error in the seventh. He struck out three.

Offensively, Breeding and Allen each went 2 for 2 with Allen driving in three runs.

Bonvillain fanned two after allowing a single to start the game. He picked off that base-runner.

In the second, he issued a walk but fanned the next three.

The Sox took a 2-0 lead in the bottom of the inning. Breeding singled and, after advancing on Misenheimer’s long fly to right, scored on a two-out double by Tucker. Allen’s base hit plated the second run. 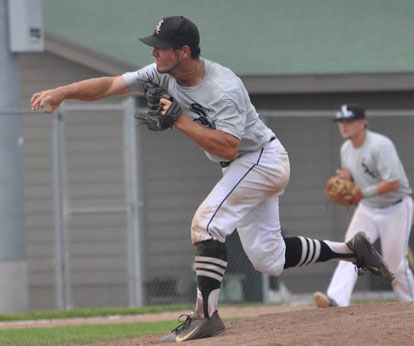 It stayed a two-run game through the fourth. Bonvillain worked around a lead-off walk in the third and a two-out double in the fourth. In the top of the fifth, he fanned two and walked one. An error put runners at first and second with two down, but Breeding threw out the lead runner when he tried to steal third.

In turn, the Sox tacked on a pair in the bottom of the frame. With one out, Allen walked and Warner singled. After a double steal, Allen scored on a passed ball and Hurt squeezed in Warner to make it 4-0.

Hastings and Breeding drew walks to start the home sixth. Misenheimer singled in a run but Breeding was out trying to score on Kelly’s grounder to short. A passed ball moved runners up to second and third with two down and Allen cracked a two-run single to cap things off.

Kelly doubled, took third on a sacrifice bunt by Tucker and scored on an errant throw in the bottom of the seventh to give the Sox a walk-off victory. 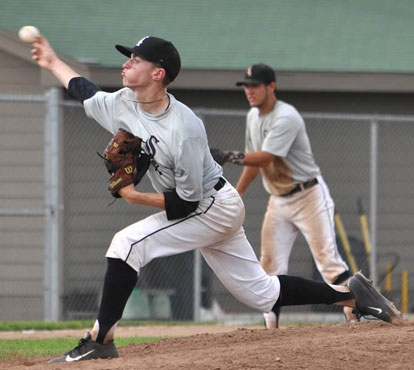 Hastings went the distance for the win, allowing one unearned run in the first frame. He struck out 10 and scattering six hits without a walk.

Bryant tied the game in the third on a one-out single by Hurt and an RBI double by Lee.

Lee went 3 for 3 in the game. Hurt and Kelly each had two hits.

Hastings pitched out of jams in the third and fifth. In the former frame, a single, a sacrifice and a groundout got a runner to third but Hastings ended the threat with a strikeout.

In the fifth, a double and an error had runners at second and third. Hastings fanned the next batter then induced a tap back to the mound that resulted in an out at the plate. Another strikeout ended the inning.

He erased a lead-off single in the sixth with a pickoff. Gretna managed a two-out single in the seventh but the 10th strikeout ended the inning and set up the Sox’ game-winning frame.

Bryant got runners to third in the first and fourth. Hurt and Lee singled to put runners at the corners. In the fourth, Misenheimer walked but was thrown out trying to steal. Kelly followed with a triple but Tucker’s liner to left was caught to keep it 1-1.

Breeding, who subsequently caught every game in the tournament, pitched the opener and allowed one run on five hits in five innings of the run-rule win. He walked no one and struck out one. Dupree worked the sixth, pitching around an error.

Hurt and Hastings each had two hits while Tucker picked up three runs batted in.

The Sox took a 3-0 lead in the first. Warner walked and was bunted to second by Hurt. Lee walked then Hastings drilled an RBI single to left. Breeding got a squeeze bunt down to plate Lee then Misenheimer reached on an error as Hastings crossed the plate.

Breeding allowed a lead-off single in the bottom of the inning but induced a doubleplay ball that started a stretch in which he retired 10 in a row.

In the top of the fourth, Hurt doubled and scored on Lee’s single. Lee took second on the throw to the plate then stole third. He scored when Hastings’s grounder to short was booted.

In the home fourth, Rosemount cut the lead to 5-1. After two were out, two singles and a double plated the run but Breeding got the third out on a grounder to short, forcing two to be stranded.

The Sox got that run back and two more in the top of the fifth. Breeding walked and stole second to start things. With one out, Kelly walked. Tucker sacrificed and when the ball was thrown away at first, both runs scored and Tucker wound up at third for Allen, who squeezed him home to make it 8-1.

Breeding worked around a two-out single and an error in the bottom of the fifth.

Bryant’s sixth started with Hurt’s second hit. Hastings was plunked by a pitch and Breeding singled to load the bases. Hurt scored on a wild pitch. Tucker’s sacrifice fly capped the scoring.