When the Bryant Black Sox Senior American Legion team managed its first hit on Monday night, a bunt single by Logan Catton in the bottom of the sixth inning, it gave them a 6-3 lead over Cabot Centennial Bank. And without adding another hit in the inning, the advantage grew to 8-3.

Though they wound up with just three hits in the game, defending State and MidSouth Regional champion Bryant opened the 2018 Legion season with a 10-3 win at Bryant High School Field.

Five Cabot pitchers proved to be tough to hit. Each was a hard thrower, but they weren’t always sure where their pitch was going. They combined to strike out 10 while walking 10, hitting two batters and issuing nine wild pitches.

“That was as weird as I’ve ever seen,” allowed Sox manager Darren Hurt. “I think they’d planned on some guys maybe throwing but maybe not that many pitches. Their pitch counts got really high really quick. They had to go to Plan B. It was weird. Because they threw some good arms at us.”

They just didn’t always know where those pitches were going.

Along with Catton’s RBI bunt single, Peyton Dillon had a solid single to right-center in the seventh and Cade Drennan beat out an infield hit in the eighth.

Will McEntire, Logan Grant and Logan Catton combined on the mound for the Sox, limiting Cabot to three runs on five hits. Grant fired three hitless innings of relief to pick up the victory. Catton worked a 1-2-3 ninth.

The Bankers were shackled by McEntire over the first three innings. He pitched around a pair of one-out singles in the third.

In the fourth, however, the big right-hander lost his lock on the strike zone and issued four free passes. Cabot scored twice. Logan Bell singled in a run and Kyler Franks walked with the bases loaded to make it 2-2.

The Sox had scored twice in the bottom of the firth without a hit. Against Bell, Logan Chambers walked then scored from first when Coby Greiner’s roller to third resulted in a wild throw by Dillon Thomas that wound up down the line in right.

Greiner wound up at second then appeared to be picked off. But he stayed in a rundown for a while and, somehow, Cabot catcher Rail Gilliam wound up with the ball in the sequence of the pickle. Greiner avoided his tag and made it to third.

Jake Wright walked, and Peyton Dillon was hit by a pitch to load the bases. Myers Buck grounded into a doubleplay but Greiner scored.

Bell settled down and worked around a walk in the second and another in the third with the help of left-fielder Austin Scritchfield who made a diving catch towards the line to rob Greiner of a hit.

After Cabot tied it in the fourth, fire-balling right-hander Mason Griffin relieved for Cabot and struck out the side.

McEntire worked around a one-out double to Thomas in the top of the fifth, finishing his night with his seventh strikeout on his 95thpitch.

In the sixth, Cabot took the lead with an unearned run off Grant. With one out, Tanner Wilson walked. An errant pickoff throw allowed him to race to third and when Dillon, the Bryant first baseman, threw wildly to third, Wilson scored.

Griffin had eased through a 1-2-3 home fifth but, in the bottom of the sixth, he surrendered consecutive walks to Wright and Dillon, managing just one strike in nine pitches. He was relieved by Ty Cyr who hit Buck with a pitch to load the bases for Gage Stark. A slow roller to short resulted in a force at second but, as Wright scored, Stark beat the relay to first.

With Dillon at third, Cade Drennan got a bunt down on the safety squeeze. Cyr fielded it and tried to get Dillon at the plate. But the throw was errant and, though Hurt argued that Gilliam, the Cabot catcher, had blocked the plate without the ball as he and Dillon knocked heads, only Dillon’s run scored at that point, give Bryant a 4-3 lead.

Stark wound up at third and Drennan at second. Cyr uncorked a wild pitch as Stark scored. With Drennan at third, Catton placed his bunt beautifully up the first-base line for the first hit and an RBI.

Brayden Lester followed with a walk and, after a wild pitch moved runners to second and third, two more wild pitches allowed both Lester and Catton to score, making it 8-3.

Grant eased through the top of the seventh and, Hunter Price, the fourth Cabot pitcher, got through the seventh despite Dillon’s knock to right-center. Buck followed with a line drive to Jackson Olivi at short. It appeared that Olivi caught the ball and instantly dropped it in order to get a doubleplay as Dillon had to hold to first. Hurt argued the call but the resulting doubleplay stood up despite the appeal.

In the eighth, Grant hit Olivi with a pitch with one out, but retired the next two.

In the bottom of the inning, Cabot turned to Brett Brockinton, one of the aces of the 2017 State champion Cabot High School team. But Drennan beat out his infield hit, and Lester walked. On a wild pitch, Drennan went to third and, when Brockinton failed to cover home plate, he rounded third and scored.

Lester wound eventually scored on a wild pitch as Brockinton added walks to Catton and Greiner before getting out of the inning.

Facing the top of the Cabot batting order, Catton set them down to end the contest.

The Sox are set to return to action tonight at Benton. 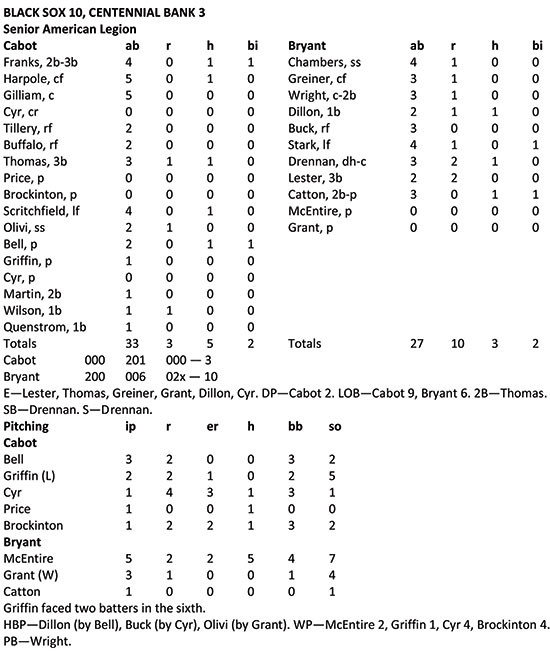