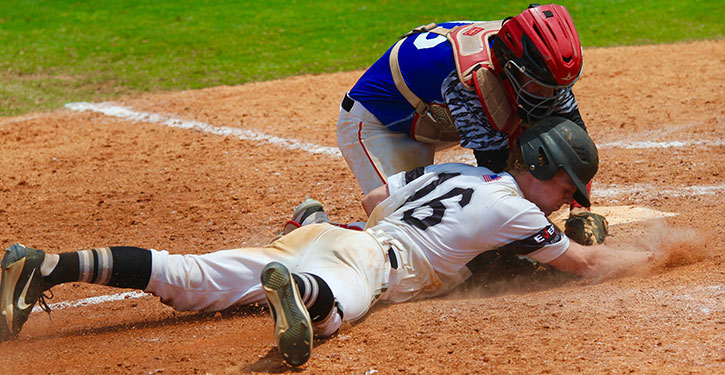 Senior Sox survive scare, come through in the clutch 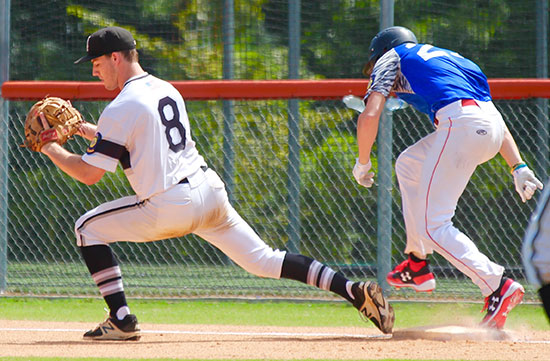 CONWAY — The Bryant Black Sox were down to one more out in the eighth inning and the three that lie ahead in the ninth. Like the sixth and the seventh inning, they had managed to get people on base. But in the previous two, they’d been stranded and the Sox continued to trail Cabot Centennial Bank 5-3 in the winners’ bracket semifinals of the Senior American Legion State Tournament at Hendrix College’s Warrior Field.

Alex Shurtleff had earned a walk then Jake Wright had as well. They stood at first and second with two away. Bryant needed someone to come through in the clutch. 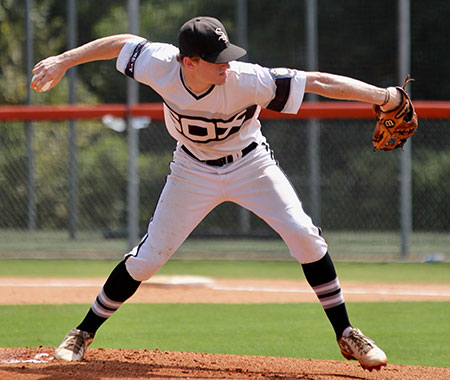 And that’s what they got.

Scott Schmidt ripped an RBI single to left and Shurtleff flew home to make it 5-4.

Now, with the maneuvering of his pitchers, Bryant coach Darren Hurt had burned his designated hitter and the ninth-place spot in the lineup had turned into the pitcher’s spot for relieves Will McEntire and Boston Heil who both got big outs to keep it 5-3.

Heil’s spot had come up behind Schmidt and, no doubt, he was ready to hit even though he’d rarely done so this summer. Before the game, Hurt had taken Brandon Hoover to the outfield to watch him run, to make sure he was 100 percent. Hoover had injured a knee on July 13 and hadn’t taken a swing in a game since. But, having been cleared to play, Hurt told him he should get ready for a big at-bat late in the game. 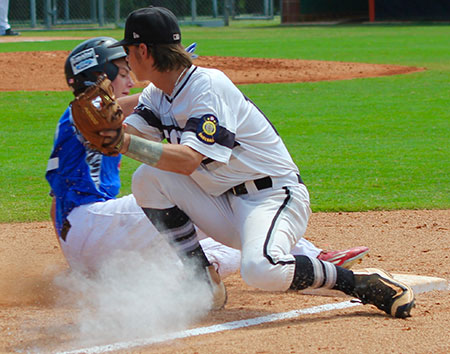 Sure enough, Hoover got the call for Heil with the potential tying run on second and the lead run on first. Facing Cabot starter Koletan Eastham, Hoover drilled a base hit to center. Wright sprinted home to tie the game and, when the ball was misplayed in center, Schmidt hustled to third and Hoover pulled in safely at second as the Black Sox’ dugout cheered him on.

Suddenly, it was a new ballgame and the Sox had the top of their lineup due. Cabot issued an intentional walk to Logan Allen who already had two hits in the game. That brought up Jake East, who shot a single up the middle to drive in Schmidt with the go-ahead run. Eastham then walked Seth Tucker on four pitches to force in Hoover, making it 7-5.

Reluctantly, the Cabot manager came out and pulled Eastham. 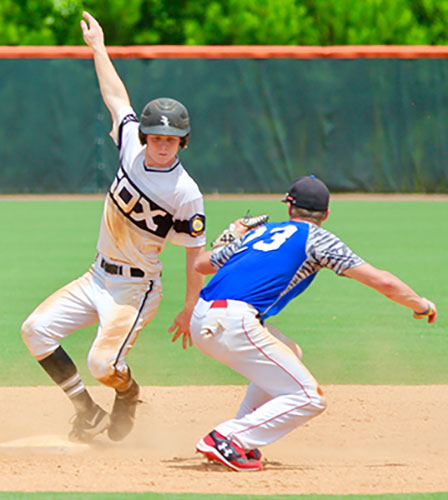 He had been thrust into the game after it was ruled that both pitchers that started the game on Sunday night (Brett Brockinton for Cabot and Alex Shurtleff for Bryant — both college pitchers) before a furious thunderstorm had forced it to be suspended until Monday morning at 11.

Cabot went with a player that had seldom pitched during the regular season in Caleb Harpole, a starting outfielder. Bryant catcher Dylan Hurt came to the plate and, on the second pitch, Harpole balked to send Allen home to make it 8-5.

He walked Hurt to load the bases again. Shurtleff made a bid for another hit but Harpole knocked it down and got the third out to end the game-turning inning.

Beaux Bonvillain, the fifth Bryant pitcher in the game and the fourth of the day, retired the side in the eighth and the ninth as the Sox extracted a thrilling 8-5 comeback win to advance to the winners’ bracket finals against longtime rival Texarkana this Friday at noon.

The other heroes were the pitchers for Bryant. 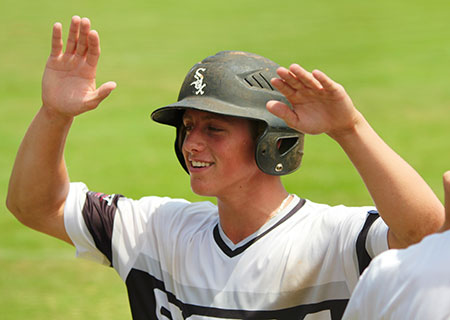 Tucker had drawn the assignment to take over as the game restarted in the bottom of the third. It wasn’t certain, however, when the teams got to the park because, in amidst the storm and the ensuing deliberations about moving the game to UCA or suspending it until Monday, it wasn’t made clear to either coach how the pitching would be handled.

American Legion baseball, as well as the Arkansas Athletic Association which legislates high school ball, has adopted a new mandated pitch limit. It’s charted out that, depending on how many pitches are thrown by a player, how much he would have to rest before throwing again. In this case, if a pitcher threw more that 30 pitches, he would have to rest one day before throwing in a game again.

On Sunday, Brockinton had thrown 48 pitches, half of which came in Bryant’s three-run third. Shurtleff had thrown just over the limit with 33. The question that remained open was whether they would be held to the limit in a suspended game. And it was still being discussed on Monday as the teams arrived.

Eventually, it was decided that the limit and subsequent required rest would be enforced so both starters were unavailable.

Tucker, as solid as any of Bryant’s pitchers this summer, struggled early on Monday, however. Cabot scored two runs to tie it in the bottom of the third with just one hit. With one away, Brian Tillery was hit by a pitch then Dillon Thomas walked. Logan Edmondson got the single to load the bases. A walk to Rail Gilliam forced in a run then Thomas scored to tie it when Mike Chumbly grounded out to second.

With a single by Blake McCutchen and a double by Harpole, Cabot took the lead in the fourth. In the fifth, Edmondson singled, Gilliam doubled and Crumbly lined a base hit over the drawn-in infield to make it 5-3.

At that point, Darren Hurt came to the mound to try to let his pitcher regroup. (Later, Hurt said he just told Tucker to give the team a chance.)

Tucker, pitching on the field he’ll call home starting this fall, did indeed give his team a chance as he struck out three in a row to force Cabot to strand runners at second and third.

As it turned out, Crumbly’s single in that fifth-inning uprising was the last hit Cabot would have. In the sixth, Tucker recorded the first out but then hit Tillery with a pitch. Hurt decided to change at that point and he brought in McEntire to face Thomas who promptly grounded into an around-the-horn doubleplay that went Schmidt to Tucker to Aaron Orender to end the inning.

In the seventh, Heil, who wound up getting credit for the win, completely blew Cabot away inducing a weak comebacker then fanning the next two batters with six consecutive strikes. Both went down waving meekly at sharp breaking pitches.

Bonvillain took over in the eighth and issued a walk to Jack Broyles then drilled McCutchen. But he retired Harpole on a force at third from East to Schmidt. Allen hauled in a fly hit by Tillery to end the inning.

In the ninth, Thomas lined out to East then Bonvillain struck out two around a two-out walk to close it and earn the save.

At the plate, the Sox seemed over-anxious against Eastham. Wright singled in the fourth but then the Cabot hurler retired the next five in a row, four on popups.

Tucker singled for his second hit to lead off the sixth and, after two more flyouts, Wright singled again but Eastham worked out of the jam.

In the seventh, Schmidt, who had three hits, singled and, with one out, so did Allen. But the Sox couldn’t get the clutch hit they needed. 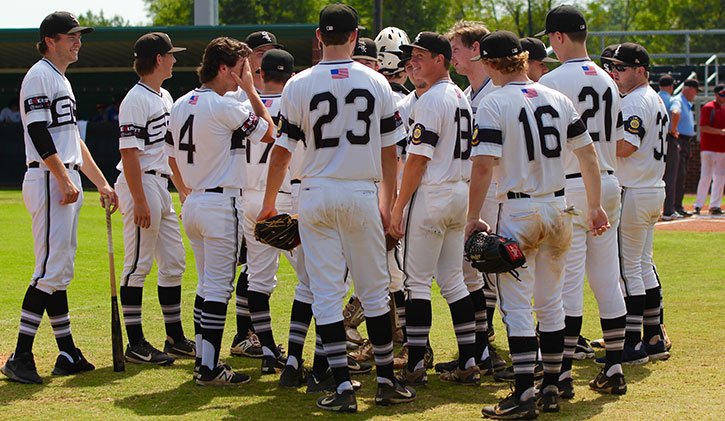