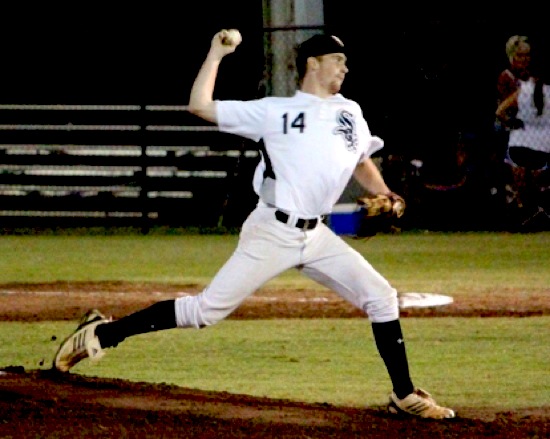 JONESBORO — The longest losing streak of the season for the Bryant Black Sox Senior American Legion team was three games during a stretch in mid-June when the team was getting ready to make its first trip to the Battle of Omaha, a national tournament held in conjunction with the conclusion of the College World Series.

The third of those setbacks came at the hands of an impressive Fort Smith Kerwins team, 7-3, at UCA in Conway. 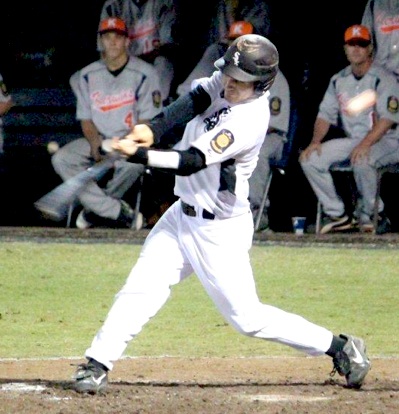 The Sox bounced back to win three straight in Omaha, won the regular-season Zone 4 championship and finished runner-up to Texarkana in the league’s post-season tournament.

And, on Sunday at the Senior Legion State Tournament at mosquito-ridden Nettleton High School, the Sox got another shot at Kerwins, a team with players from seven different schools in west Arkansas and east Oklahoma. (All of the Sox come from one school.)

This time, they piled up a 10-5 lead and held on for a 10-8 win to advance to the winners bracket final on Sunday at 8:05 p.m. They’ll meet Texarkana for the fifth time this season (each team has won twice) with the winner earning a spot in the championship round.

“The frame of mind,” stated Sox coach Wayne Taylor when asked what made the different this time against Fort Smith. “We said coming into this tournament that we felt like none of the teams here had played a tougher schedule than we had. When we played these guys at UCA, it was in that tailspin that we had going. Right after that, we headed to Omaha and got things going.

“And they are an awesome team,” he asserted. “I mean, they are a very good team.”

Hunter Mayall, who hadn’t hit a home run all season, smacked his second in as many State tourney games, a two-run shot that put the Sox ahead to stay in the bottom of the third inning. He also had an RBI triple and a sacrifice fly, giving him four runs batted in.

“He asked (Blake) Davidson if we were playing at Nettleton and Blake said, ‘Yeah,’” Taylor related. “He said, ‘That’s good because I smash at Nettleton’s field.’ He was excited about the field. There’s something with maybe the hitting background or whatever out there.”

Jordan Taylor had two hits and three knocked in. Landon Pickett and Hayden Lessenberry pitched in with two hits apiece.

Taylor, the Bryant starter, limited Kerwins to one run over the first five innings as he and his teammates built a 6-1 lead. It was 7-3 when he gave way to Dylan Cross in the eighth. Fort Smith rallied but Cross ended the game by striking out Koda Glover, who represented the potential tying run.

“Jordan did exactly what we needed him to do,” Coach Taylor related.

The hard-throwing Glover, who was named one of the top 18-and-under pitchers by USA Baseball at its National Team Identification Series last September, started for Kerwins but the patient Sox batters made him pile up 111 pitches in five innings while building that 6-1 advantage. 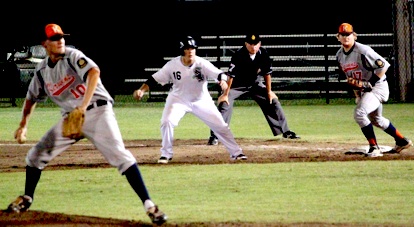 “He threw well but we hung in there and got some good key hits,” Taylor mentioned. “You know last night (in a 6-2 win over Jonesboro) we had the base-runners and we didn’t get the big hits to put it away. Tonight, we didn’t have near the base-runners but we got a lot more big hits.

“We worked the plan offensively,” he said. “We wanted to be patient with him. We knew he threw hard but watching him in the bullpen and in between innings, it looked like he had trouble getting any secondary pitch over. And we knew too that, as hard as he threw — we got a glimpse of him last year on the USA Baseball deal — we saw where we thought you might be able to get to him up here a little bit. But he’s a great talent. If you let him control the game and bad things happen to you.”

Kerwins scored the game’s first run with one out in the top of the opening inning. Matt Turner singled and scored all the way from first on a long double by Brennan Rogers.

But Taylor struck out clean-up hitter Nick Walker and got Glover to fly to left to keep it at that. He would finish with nine K’s and just three walks in his seven innings. He fanned the side in the second and the Sox tied it in the bottom of the inning. Pickett singled with one out and Chris Joiner worked a walk. But they remained in place with two down. Lucas Castleberry came up and waged a nine-pitch battle with Glover, fouling off three 3-2 deliveries before scorching a liner to right-center for an RBI single.

Though just six batters came up in the second, the Sox made Glover throw a whopping 37 pitches.

Taylor worked around a walk and a two-out error in the top of the third and it appeared that Glover was going to breeze through the bottom of the inning before Taylor worked a two-out walk. On the very next pitch, Mayall lost one over the right-field fence to make it 3-1. 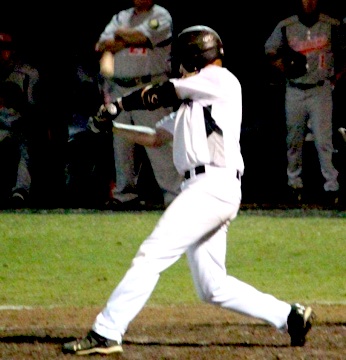 Kerwins’ Zac Maestri managed a one-out single in the top of the fourth but the Sox turned a doubleplay to get out of the inning. Taylor walked Michael Wilhelm to start the fifth but he was forced at second on a grounder by lead-off man Chance Scamardo. After Lessenberry, the Bryant catcher, went to the screen to track down Turner’s foul pop, Scamardo tried to steal only to be thrown out to end the inning.

Lessenberry then opened the bottom of the fifth with a shot up the middle for a single. Tyler Nelson did the same then Tyler Brown got a bunt down and past Glover for a base hit to load the bag for Taylor who laced a liner to left-center for a two-run double. Mayall delivered a third run with a sac-fly and the Sox had their 6-1 advantage.

Kerwins managed an unearned run in the top of the sixth but Bryant got it back on another clutch two-out hit by Taylor. Lessenberry, who lined a one-out single to left-center then advanced on a walk to Nelson, scored the run.

Another unearned run in the top of the seventh trimmed the lead to 7-3.

Kerwins picked up some momentum when the Sox stranded a runner at second in the bottom of the inning then greeted Cross with a walk, a double and a sacrifice fly. A second run scored on a wild pitch as the Sportsmen cut the lead to two.

Bryant, however, grabbed the momentum back by tacking on three runs in the eighth off Kerwins reliever Bailey Nash. Lessenberry drew a walk to start the uprising this time. Cross got a nice sacrifice bunt down and, after a passed ball, Lessenberry came in on a wild pitch.

With two down, Taylor struck out but the pitch got past Walker and went to the screen allowing him to get to first safely, bringing Mayall to the plate. On an 0-2 pitch, the Sox clean-up hitter scorched a knuckling liner that got over the head of Wilhem, the Kerwins centerfielder, for a triple. Brady Butler got Mayall home when he lashed a single to right on a 1-2 delivery.

Fort Smith’s last-ditch uprising in the ninth began with a walk to Turner. A balk, a one-out single and a fielder’s choice got him home. Rogers singled and, after another wild pitch put runners at second and third, Walker plugged the right-center gap for a two-run double that brought Coach Taylor to the mound and Glover to the plate as the potential tying run. But Cross needed just four pitches to fan Glover, ending the game at about midnight.