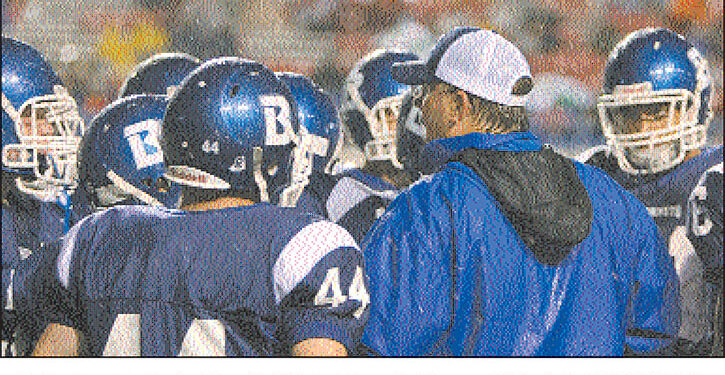 Ball-hawking Hornets pour it on Panthers

LITTLE ROCK — Call it having a nose for the football.

If there’s a football game being played in high winds and heavy rain, there are two things you can probably count on: The crowd ain’t gonna be as big and there will be fumbles.

There was actually talk that the 2008 Salt Bowl, the ninth edition of the designation and the 36th renewal of the rivalry between the Bryant Hornets and the Benton Panthers, might attract 30,000 fans to War Memorial Stadium, a record for high school football in the state. As it turned out, though, there might have been 1/10th of that on hand, braving the rugged conditions courtesy of the remains of Hurricane Gustav.

Oh, and there were fumbles. Thirteen of them, in fact, between the two teams. Benton had six fumbles and lost three to go with three interceptions. Bryant fumbled the ball seven times but, incredibly, didn’t suffer a single turnover.

That, of course, might be a big reason the Hornets rolled to a 36-12 victory, making the seniors on the team 3-0 in their Salt Bowl games.

Another was the fact that, with the conditions being what they were, Bryant limited much of its offense to a short-yardage alignment that featured two tight ends and an I-formation as opposed to their usual spread. The result was a breakout game for junior tailback Chris Rycraw who rushed for 130 yards on 19 carries including touchdown runs of 2, 4, 9 and 35 yards.

And senior safety Dijon Benton made all three interceptions. The first set up a score, the second he returned for a touchdown, and the third he brought back 82 yards for what would’ve been another TD except for a blocking penalty during the play.

Bryant committed the first fumble, actually, a pass that was ruled a lateral that squirted out of bounds before Benton could recover it on the second play of the game. The Hornets wound up punting after they couldn’t make up that loss and senior Austin Humbard unloaded with a 54-yard kick that pushed Benton back to its own 11.

And, on the Panthers’ first play, Bryant forced a fumble and linebacker Brandon Peach recovered at the line of scrimmage. Rycraw, running behind the left-side of the offensive line and Humbard, a linebacker turned fullback, crashed to the 2 on the next play then scored from there on second down.

Austin Bradley extended his extra-point string to 36 and Bryant led 7-0.

After Benton picked up a first down on a scramble by quarterback Kody Hamlin, a third-and-eight at the 48 brought Dijon Benton’s first interception.

A play into that possession brought the requisite controversy of the Salt Bowl. Senior running back Aspen Trevino picked up a couple of yards off the left side and as he was being slung down, the ball came loose and the Panthers’ Austin Sams scooped it up and set sail the other way for an apparent touchdown.

The play, however, had been whistled dead before the ball came out and much to the consternation of the Benton players, coaches and fans, Bryant retained possession.

On the next play, Rycraw broke a 32-yard run into Panther territory and, on eight more rushing plays in succession, the Hornets found paydirt again. Along the way, Rycraw converted a fourth-and-one from the Benton 32 with a 9-yard bolt. Two plays later, quarterback Jimi Easterling kept for 10 yards to the 4, setting up the tailback’s second TD.

Benton countered with its best drive of the game for an answering score, set up by a kickoff return from Sams that might’ve gone the distance if not for safety Chris Brooks and Bradley, the kicker, the last line of defense.

As it was, the Panthers started the possession at the Bryant 48, their best field position of the game. Eight plays later, however, they faced a fourth-and-10 at the 23. After a timeout, Hamlin threw deep down the left side toward Sams who split a pair of Bryant defenders coming back to the ball at the goal line for the score.

An extra point attempt with Hamlin stepping in for the team’s injured kicker, was wide left.

The teams traded punts with Humbard driving a 57-yarder to turn the field over. Later, after the Hornets survived three fumbles on a subsequent possession, they gave the ball up on downs at the Benton 25. Two plays later, sophomore defensive tackle Josh Hampton, who was in on seven stops including a pair of sacks in his varsity debut, stripped the ball away from Hamlin and recovered the resulting fumble at the 33.

The Hornets, however, were unable to take advantage in the final 36 seconds and it was 14-6 at the half.

The Bryant defense took over in the third quarter. Benton’s first two plays lost yardage and, after a pass on a fade route was broken up by cornerback Logan Garland, Hamlin dropped back to punt inside his own 5. He got his hands on the high snap but couldn’t handle the slick ball and it rolled into the end zone and through it for a safety to make it 16-6.

In turn, the Hornets took the free kick and drove 47 yards for another score. The key play was a third-and-7 pass from Easterling to Brandon Parish who was stripped of the ball as he was struggling for the yardage needed for a first down. The ball, however, rolled out of bounds before anyone could recover it and the Hornets got a new set of downs. Trevino picked up 16 yards in three carries then Humbard his lone chance from the fullback spot just as a change of pace and he muscled his way to a 10-yard gain to set up Rycraw on the next play when he skirted left end for the 9-yard touchdown run.

Suddenly, the Hornets led 22-6 and the defense continued the momentum. Burchfield sacked Hamlin for a 10 yard loss then Hampton dropped him for a 6-yard setback. A third-down pass fell incomplete and a short punt had the Hornets back on offense just 48 yards from paydirt.

They covered that in five plays, mostly on Rycraw’s 35-yard scamper, breaking an off-tackle play outside and maneuvering through the Panthers secondary. Bradley, by the way, commenced to start a new streak by converting to make it 29-6.

In turn, the Panthers, starting from their own 20, fumbled but recovered for no gain. On the next play, however, Dijon Benton perfectly timed his break on the ball on a pass down the seam. After the interception, he sprinted down the left side into the end zone for the score that, with another Bradley PAT, made it 36-6.

On the subsequent Benton possession, they picked up their initial first down of the first half when, on a 1-yard scramble, Hamlin was hit out of bounds and the Hornets were flagged for a late hit.

Junior cornerback Garrett Bock broke up a pass on first down from the 37 and, after running back Edrick Coggins gained 6 yards (the longest gain for the Panthers to that point in the half), the Hornets stopped a third-and-4 run for a loss of two, forcing another punt.

And when Bryant was unable to pick up a first down, Humbard dropped back to punt inside the 20. Though he got a hand on a high snap, he couldn’t bring it in and was tackled at the 13. Benton took over but a holding penalty negated a Hamlin scamper to the 3 and, on a second-and-22 at the Bryant 25, Hamlin again threw down the middle and Dijon Benton got the oskie. On a nice return, the Bryant safety took it all the way back, 82 yards, only to have an illegal block negate the points.

With reserves in the ballgame, the Hornets failed to pick up a first down but the defense forced one final turnover with Brennan Bullock pouncing on a Coggins fumble. With Reuben Ballard working at running back, the Hornets picked up yardage but a delay penalty set them back and they turned the ball over on downs at the 48.

Benton then drove for its second score, a 2-yard run by Lee Richardson with 1:38 left in the game.