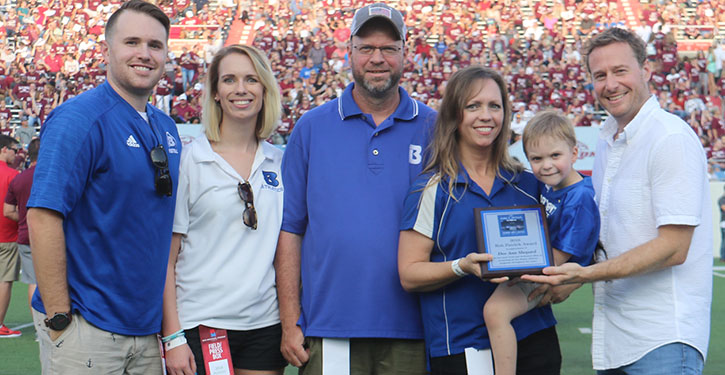 The Community Service Awards presented before the Salt Bowl each year went to DeeAnn Shepard of Bryant and Tracy Keene of Benton. Both work in the respective athletic departments.

The awards were presented by Dr. Bryan Hill of Westrock Orthodontics, which sponsors the awards. They are given out to a member of the respective communities that “has gone above and beyond to support the schools and athletic programs.”

Along with the citations, the following announcements were made about the recipients:

Shepard: “DeeAnn is married to Matthew Shepard and has 3 children. Jessica, Jacob and Tucker. She and her family are proud to call Spring Creek Baptist Church, their home church, where she involved in the nursery and children’s chapel.

“DeeAnn started working for Bryant Middle School in August 2002 and was an instant Hornet fan! She began working athletic events and became a supporter of the athletic program and the Bryant community. She is currently working with Mike Lee and the Bryant Athletic Department.

“DeeAnn also spends time everyday supporting the children of the Boys and Girls Club by driving their bus and contributing resources.

“It is an honor to be the recipient of the Rob Patrick Community Service Award.”

Keene: “Tracy is married to Danny W. Keene for 34 years and has four children, Tyler and Kellsie Keene & Kylie and Landon Parker. Tracy is also “Nanna” to three grandchildren, Dalton & Tatum Keene and Drake Parker. She and her family are proud to call Grape Chapel Church of God, their home church, where she is the assistant song director and a nursery Sunday school teacher. Tracy is also a registered member with the Comanche Nation of Oklahoma.

“Tracy was born and raised in Benton and graduated from Benton High School in 1984. Her husband and children were also Benton High graduates and were active in Panther football and golf. She is proud to have a long Benton Panther history.

“She started working for the Benton Public Schools in June of 2000 and has loved being a part of the Salt Bowl history, from the last game played at the CW Lewis Stadium, to the first game played at War Memorial. Working with Ronnie Kerr and Tom Farmer in the initial planning and seeing it grow to the record breaking event it has become, has been life changing.

“Tracy comes from a family of community service workers, her grand-father was a Benton Fire Chief and her dad was a sergeant for Benton City Police and Saline County Sheriff’s office. She is very much honored to be a recipient of the Donnie Burks Community Service Award.”

The awards are named after the first recipients in 2010. 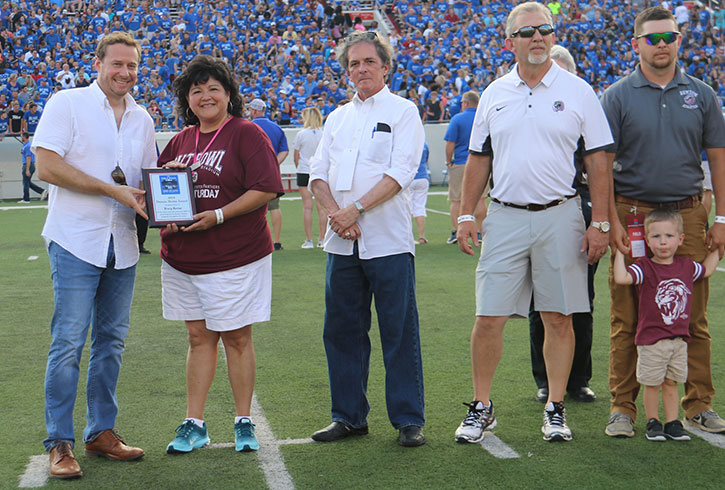