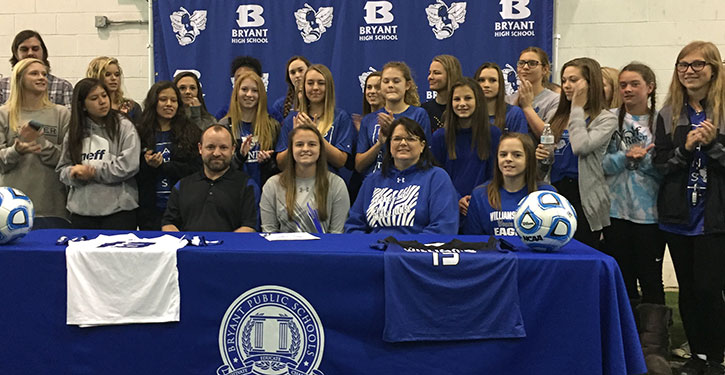 ‘Silence’ is golden for Williams Baptist as Bryant’s Kennedy signs

Dubbed a “silent leader” by former head coach Julie Long doesn’t mean that Sarah Kennedy doesn’t talk. Like most coaches — and teachers for that matter — someone that’s considered silent is one who doesn’t draw a lot of attention to themselves by complaining or disrupting. In sports, it also means they’re not a rah-rah type, particularly.

“She leads by example over and over again,” is the way Long put it.

But Kennedy herself will tell you that, if you’re going to play defender on a soccer team, you can’t be quiet.

“Communication, just talking and seeing the whole field,” she said of the keys to playing there well. “You can really be a leader from the back.”

And new head coach James Paul added his conversations with Kennedy have been quite valuable to him.

“She’s helped my transition into the job and that’s the biggest help I could ever ask for,” he related. “She’s the team communicator. She’s helped show me what to expect and what I should expect out of everybody else. If the team needs to know anything from my perspective, she helps me. Anything that they’re used to in years past, that I just didn’t know about, she keeps me updated on; ‘Hey, this is what they’re thinking; this is what they need to know,’ all of that. She’s awesome. I rely on her a lot.”

On Friday, “the silent leader” officially signed a letter of intent to take her skills of communication and defense and leadership to Williams Baptist College in Walnut Ridge to continue her career on the field and in the classroom under scholarship.

“I looked at a school in Kansas and they were just too far,” said Kennedy, the daughter of Susan and Danny Kennedy. “I wanted to stay close to home.”

Asked what helped her make her decision, Kennedy related, “The team, definitely. They’re very family-oriented and I really like that close-knit community.”

It reminded her, she added, of her own family and the Lady Hornets family.

“I’ve only known her a couple of months,” Paul said. “She’s a great girl, she’s got a great heart and she’s got a great family. Williams is getting one of those girls who’s going to devote herself to what she’s doing.”

“It’s truly been an honor to have coached her,” Long added. “I know that Sarah’s only going to grow the more she keeps playing. She’s a great signing for Williams Baptist. I know that they’ll feel the same way afterwards.”

“When we go out recruiting, we always look for individuals that can not only contribute on the field but off the field as well,” said Williams Baptist coach Shane Stolz. “I remember the first conversations I had with Sarah, getting to know her more as a person and what she represented, I thought she’d be a good fit for not only our team but our Williams Baptist College community.

“Then when I watched her play, I thought this is a girl that can fit right in with our team and what we’re trying to do at Williams,” he added. “Whenever she came, she actually went through a training session with our girls. After the training session, all the girls were like, ‘Make sure you sign her. Has she committed yet?’ She was committed at the time but whenever she decided for sure she was going to sign, it was one of the happiest moments not only for me as a representative from Williams but also for the girls. When I told them, they were really excited about it.

“So we’re all excited to see her come in, compete, get better and get her education,” Stolz concluded.

Kennedy also played volleyball at Bryant but she missed her senior season with a shoulder injury that required surgery.

“I was out about six months,” she said. “I didn’t play volleyball at all this season. It was very hard.”

But she was determined that it wouldn’t eat into her soccer time.

“I was out of shape because I really hadn’t done anything for six months,” she said. “So it really took a lot of doing stuff out of practice and running at home, just getting back to soccer shape.”

“I think it’s been hard on her to push herself,” Paul acknowledged. “So, we’re still in transition as far as like getting to top shape for playing a whole game. That’s been a struggle. But she’s caught up fast. She’s really tried to do her part and get in shape.”

Kennedy came into the Bryant program as a wing.

“My sophomore year, Coach Long said, ‘Hey, do you think you could play defense?’’ she recalled. “I was like, ‘I’ll give it a shot’ and it worked out for the best. I like it.”

And her coach liked it too.

“We were playing the State soccer tournament here and we were playing Bentonville,” Long remembered. “They had McKenzie Dixon (now a freshman all-conference player at Austin Peay). She’d been Gatorade Player of the Year two years in a row. We really had no answer for her the couple of times we’d played them already.

“Sarah actually had not been starting the whole season,” she continued. “It was kind of on and off. But she really came up strong near the end of the season and I went to her and said, ‘Sarah, what do you think about if we made a mark, you on McKenzie?’ She was like, ‘Yeah, I can do this.’ And we held (Dixon) to one goal that game, the whole defense together, and she was a huge part of that. And we went on that year and won a State championship.”

No doubt, McKenzie Dixon has mostly pleasant soccer dreams but when she has a bad one, you can imagine Sarah Kennedy is in it.

“Sarah has now been a part of a team that’s been 67-6-3,” Long noted. “She’s part of a senior group that has only lost six games in four years. I think that’s a tribute to these seniors and the success they have on an off the field.”

Along with that 2015 State title, Kennedy and her teammates were State runners-up in 2014 and State semifinalists last year. And they have big plans for 2017.

“They said, if I work hard, I could have a starting position my first year,” she said of Stolz and his staff. “So, I look forward to pushing every day.”

“She will always rise to the occasion,” said Long. “She steps up. Given the opportunity, I know she’ll do the same thing there.”

If you need any further indication of how tough Sarah Kennedy is, all you have to know is that, upon graduation, she wants to teach middle school math.