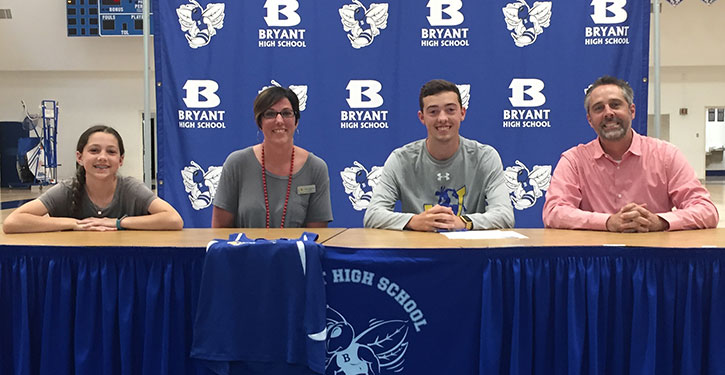 Singleton late to track but not too late

Raney Singleton’s first choice when he got to high school was soccer.

“I tried out for the team,” he said. “The soccer coach was like, ‘No, I can’t take you because you might not have good enough grades.’ I said, ‘Fine. I think I’ll just try out for track.’”

Before his junior year, Singleton went to Bryant Hornets track coach Steve Oury who told him to come out and give it a try. You could understand if the coach thought that a junior coming out for track, especially wanting to run the hurdles, no matter what his grades, he might not be able to reach the point of contributing.

But, fast forward over a year and there he was on Monday, May 8, signing a letter of intent to continue his education and his track career under scholarship at Southern Arkansas University.

Not only did he take to track and the hurdles but he turned his scholastic career around to the point that he made a 31 on the ACT.

“Combined I have a 33,” said Singleton, the son of Marcus and Paige Singleton.

“I’ve definitely worked on my grades a lot more, especially this year,” he added. “My test grades have never been terrible but it’s just been the homework and stuff that brought me down. My grades have gotten better.

“I applied to a lot of different colleges. SAU offered me a lot of money, just academic, straight up. That was a really big bonus for me.”

And, on the track, he came a long way too.

“Starting out in the 11th grade and taking on an event like the hurdles, which is a technical event, he was behind a lot of the people he was competing against,” Oury recalled. “But he was a quick study. By the end of his 11th-grade season, he started to really show some potential. He really stepped up in the conference meet that year with a personal record in the 42-second range (in the 300).

“This year, we knew he would be one we were counting on,” continued the coach. “His highlight this year was finishing fourth at the conference meet. He ended up running a PR of 41.99 in the 300. He also knocked his 110-meter time down to 16.63.

“Raney’s got a lot of talent,” Oury said. “He’s an intelligent kid. I think he’s got the potential to really blossom in college.”

“My first season was all right,” Singleton assessed. “I was the second fastest hurdler on our team. I got eighth in conference. I mean, that’s not bad especially for a first year.

“So, this year, I started off the season with two second-places,” he continued. “After the second meet, I was ranked No. 5 in the state. Then I started the think, ‘Yeah, I think this is going to work out.’ I ended up getting fourth in conference then 10th at State. I’m not perfect by any means but definitely better than when I started. It was a good season.”

“We’re also looking forward to the Decathlon,” Oury mentioned. “He said he wants to try it. It’s going to be fun to see how he does in that. That’ll be a good way for him to finish off his senior year.”

Choosing SAU was helped by a former Hornet runner.

“I knew I wanted to run track and fortunately I know somebody who’s on the their team, Cole Watson,” Singleton said. “He kind of set me up with the coach’s number. So, I asked the coach if I could visit. I went there. It was a nice campus. But he took the time and actually showed me everything, which I really liked.

“The coach actually took time out of his day and took me around campus himself,” he reiterated. “I’m planning to major in Psychology and he takes me to a Psychology professor. He clears his stuff and describes to me the Psychology program. I really liked the connection there, the student-teacher relationship.”

After visiting with the professor, Singlton continued, the track coach, “sat me down and told me, ‘We can give you this much money.’ I was like, ‘Sounds great.’

“It was on top of the academic,” he related. “That was really the one (thing) that stood out for me, just for affordability. Couldn’t beat it.”

Ramos came a long way and is going further, all the way to Chicago
Bryant-Sheridan tune-up goes Lady Jackets’ way