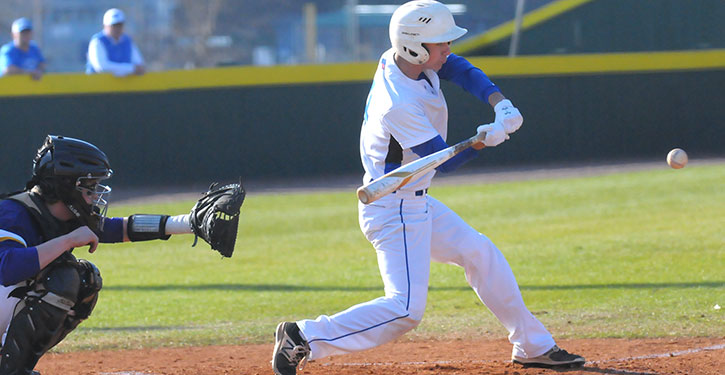 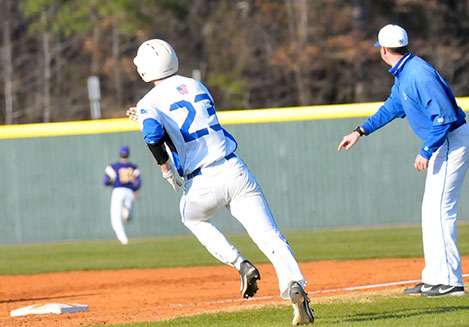 Matthew Sandidge rounds first as his blast to right field goes over the fence. (Photo by Kevin Nagle)

Scott Schmidt went 3 for 3 and Matthew Sandidge slugged his second home run of the season — one of six extra-base hits for the Bryant Hornets as they blasted the Little Rock Catholic Rockets 14-4 in five innings Thursday night in 7A-Central Conference play.

Sandidge and Peyton Dillon had two hits each. Dillon’s included a two-out, three-run triple that broke the game open.

The Hornets, expecting to see the Rockets’ stud lefty Evan Hiatt on the mound, got right-hander Preston Vondran instead. Hiatt played first and went 2 for 3 with two doubles and two runs batted in. 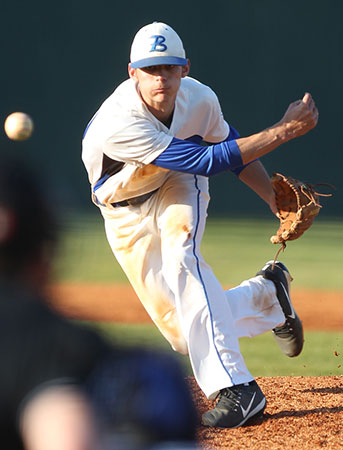 The Hornets hit Vondran with a five-run first, though four of the runs were unearned. The Rockets wound up using four pitchers. Combined, those hurdlers walked 10 and surrendered 11 hits.

“I was worried,” acknowledged Hornets coach Travis Queck. “Yesterday, we took two rounds of batting practice, from the left side and from the right side. We were preparing for another arm (Hiatt). But we caught them on a day where they weren’t able to use that arm and our guys took advantage of it.

“And they got every bit of it,” he asserted. “There were some loud hits today. I’m proud of them for that. They were more prepared than I originally thought. Coming into the game, I was kind of nervous.”

Greiner pitched around a two-out double by Hiatt in the top of the first then the Hornets’ five-run uprising began with a one-out double down the left-field line by Schmidt. He took third on a wild pitch then scored when Jake Wright’s grounder to short was booted. 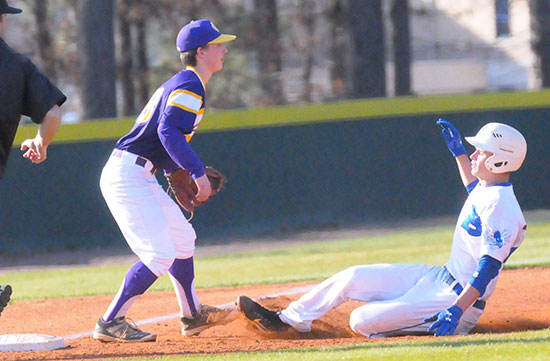 K.J. Merriweather, running for Wright, stole second and took third when Dillon grounded out to short.

Sandidge made it 2-0 with a single to right. Greiner ripped a drive to left-center that, despite a head-long dive, left-fielder Ethan Fowler couldn’t hold. Greiner hustled into second with a double.

Austin Ledbetter followed with a single up the middle that got past Catholic’s Jordan McCuin. Both Sandidge and courtesy runner Logan Grant scored, and Ledbetter wound up at third with Bryant up 4-0. 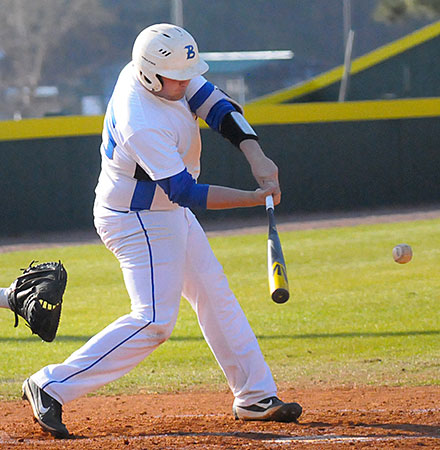 Brandon Hoover sliced a double down the right-field line for an RBI double that capped the inning.

Greiner struck out the first two he faced in the second but Will Plafcan singled to center and so did John Satterfield. Miles Montgomery hit a grounder to second but the Hornets misplayed a rundown between third and home as courtesy runner Chris Gray scored. All they had needed was a throw to first to end the inning.

The Hornets were held for the only time in the game in the bottom of the second and, in the third, Greiner worked around a lead-off hit to keep it 5-0.

“It wasn’t Coby’s best today,” said Queck. “We had some big innings and maybe the time that lapsed — and (Catholic) does a good job of not allowing us to get into a rhythm. They like to take their time and figure that’s a way to get us off our tempo and rhythm. Coby had to adjust to that, but he did a good job throughout the game in sticking to the game plan.” 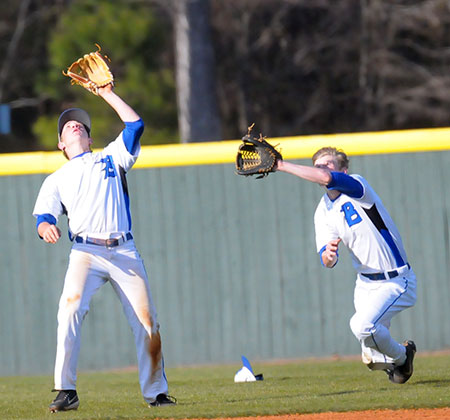 Scott Schmidt settles under a pop behind second as right fielder Gage Stark hustles in just in case. (Photo by Kevin Nagle)

The second of those big innings was the third. Sandidge led off with his bolt to right on a 3-1 delivery from Vondran.

The next two were retired but a walk to Hoover extended the inning. Buck yanked a double into the left-field corner and the Rockets changed pitchers, bringing in lefty Lawson Tiffee to pitch to the Hornets’ lefty-hitting lead-off man, Logan Chambers.

But Tiffee walked him to load the bases. Schmidt singled to right, driving in two and, after a walk to Wright, Dillon mashed a 3-2 pitch into the gap in left-center for his three-run triple to make it 11-1.

Greiner hit a batter with one out in the top of the fourth but Sandidge helped him out by flagging down a sinking liner to left-center, making a sliding catch.

The Hornets tacked on a pair of runs in the home half. Greiner walked and Grant, on to run for him, stole second, picking up third on an errant throw from Plafcan, the Rockets’ catcher. He would score on a wild pitch.

With two away, Buck worked a walk before Chambers and Schmidt cracked consecutive singles to make it 13-1. 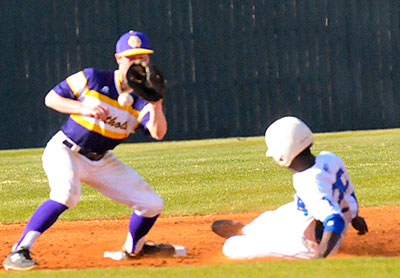 K.J. Merriweather slides into second with a stolen base. (Photo by Kevin Nagle)

In the top of the fifth, pinch-hitter Blake Schluterman was hit by a pitch and Eric Moll drove a single up the middle to bring up the dangerous Hiatt, who belted a shot off the fence in left-center for a two-run double.

Still, just three outs away from ending the game, Greiner induced a grounder to third then had Hiatt picked off second. Hiatt took off for third and when the throw there was errant, he scored to make it 13-4.

Greiner retired the next two and the Hornets had to bat in the bottom of the inning.

Jack Foster, the third Rockets’ pitcher, walked Dillon to lead the inning off. Grayson Prince came on as a pinch-runner and on a pitch in the dirt to Sandidge, he took off for second. But Plafcan pounced on the ball quickly and got a throw to second in time.

Reliever Henry Coppens, however, struggled with his control as he walked Sandidge, Greiner and Ledbetter to load the bases. He was able to get Hoover to hit a grounder to short. In hopes of an inning-ending doubleplay, Montgomery, the shortstop, fired to second only to have the ball dropped by Moll, who was obviously trying to relay to first in a hurry to get the doubleplay. Sandidge scored to end the game.

The Hornets improved to 7-1-1 overall this season and 2-0 in league play. Catholic, which opened conference play with a 10-9 win over the defending Class 7A State champion Cabot Panthers, fell to 1-1 in the league.

“We’ve had some tough battles with them and that’s what’s fixed in your mind,” Queck said. “For us to give up that 10-run lead in the top of the fifth, kind of worried me. I’ve seen things like that evaporate.

“I’m trying to get these guys to understand, we’ve got to keep them down,” he asserted. “We’ve got to stay focused throughout the game. And they did a good job of rebounding, especially after getting caught stealing there on that passed ball (in the bottom of the fifth). They came back and got that 14th run and put it away.”

Bryant is set to play on Friday at White Hall in a non-conference contest. During spring break, the Hornets are scheduled to play in the Central Arkansas Classic. 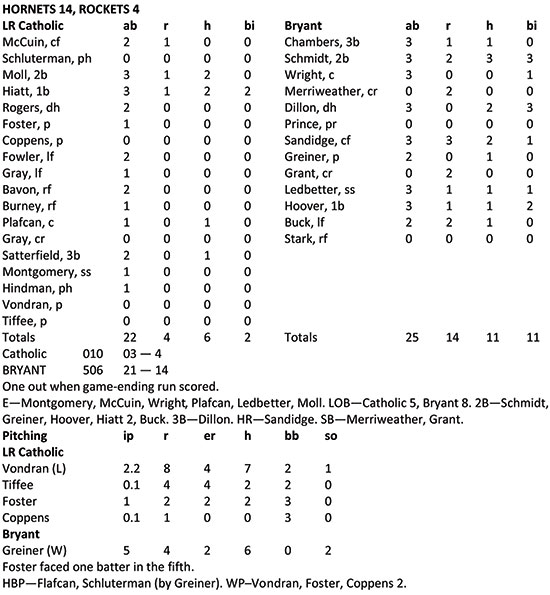