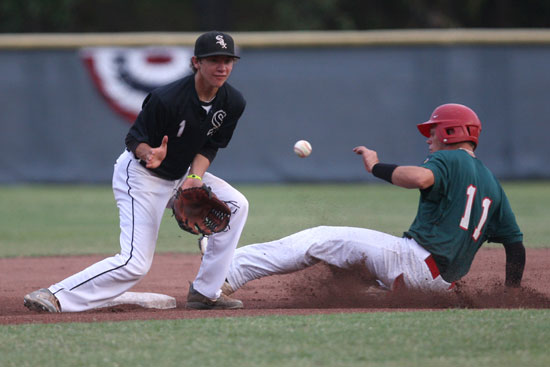 NORTH LITTLE ROCK — There’s no doubt, for anyone that has watched him manage a game, Darren Hurt loves[more] the squeeze play. Sometimes he’ll just go with the safety squeeze where the base-runner at third waits until the batter gets a bunt down before he takes off for home but, mostly, he likes the suicide squeeze. That’s when the runner at third takes off as the pitch is thrown and the batter has to just make contact and keep the ball fair to make it successful. 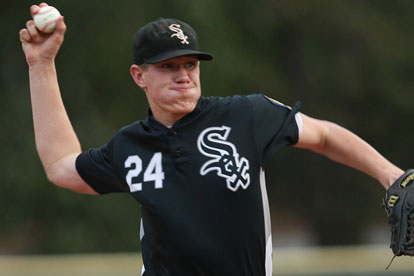 Not that it’s easy, of course. Knowing your teammate is barreling toward home and will be the proverbial dead duck if you don’t make contact, can provide for plenty of pressure for a batter. But several of the Bryant Black Sox have the knack.

In their three wins at the Senior American Legion State Tournament over the weekend, the Sox executed the squeeze in two of the games, twice in their win over host North Little Rock. So, it figured if, given the opportunity, they might use it again on Monday night against Paragould 7-Up.

They got the chance in the bottom of the first and it paid off big time. After starting pitcher Nate Rutherford pitched around a one-out single in the top of the inning, the Sox proceeded to load the bases against Paragould lefty Matt Wall. Hunter Mayall beat out an infield hit and, an out later, Jordan Taylor got a pop to shallow center to fall in. Landon Pickett shot a single through the hole and into left to bring up Tyler Nelson. 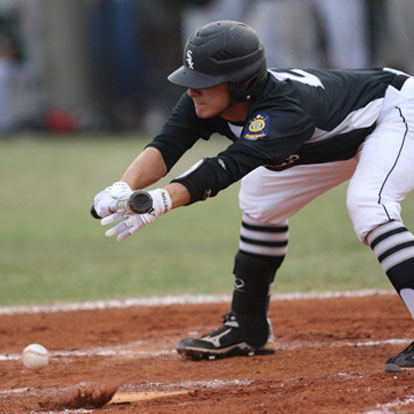 When the count went to 3-1, Mayall took off from third and had such a great jump, it looked like he might just steal home. At the last second, however — even as Paragould catcher Gunner Pitts was coming up out of his crouch, Nelson wheeled around and bunted the ball seemingly right out of Pitts’ mitt.

Mayall was home free but the Sox got a big bonus when Wall fielded the ball near the first-base line and unleashed a wild throw past first baseman Logan Murray. Taylor sprinted home and so did Pickett. Nelson wound up at third and the Sox suddenly had a 3-0 lead. And when Marcus Wilson powered a fly to deep center, he was credited with a sacrifice fly as Nelson tagged and came home to make it 4-0.

With that, the Sox were on their way to a 12-2 victory that ended Paragould’s season. Bryant, now 32-5, remains the only unbeaten team left in the tournament as it heads to the championship round against the rival TEXAR Razorbacks of Texarkana. The Hogs edged Rogers in an elimination game earlier on Monday so the two Zone 4 teams will meet for the sixth time this season on Tuesday at 4:30 p.m.

If the Sox win, they are crowned State champs and make plans for the Mid-South Regional in New Orleans, starting Aug. 9. If the Hogs win, the two teams will play a second game on Tuesday, a winner-take-all final 30 minutes after the first one. 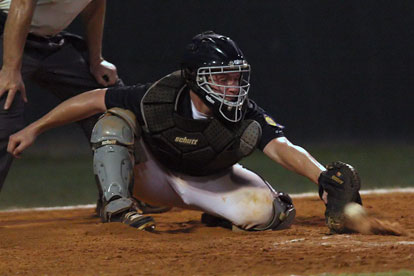 In most tournaments, Bryant would not have played Monday night. Texarkana, Rogers and Paragould would be battling it out to get their chance at the Sox on Tuesday but American Legion baseball, at State, Regional and World Series tournaments, utilizes the antiquated College World Series format that the NCAA scrapped several years ago now. Even though they were guaranteed a spot in the championship round, Bryant had to play on Monday.

It’s really a waste of a game for a team in the Sox’ position. They’re playing on Tuesday anyway and, even though winning puts them in a position of getting two chances to win one game, many teams struggle with it. 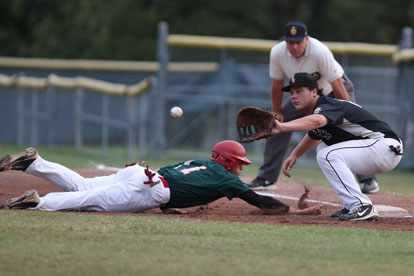 “It’s a letdown game,” Hurt asserted. “It’s hard to get (the team) up. They weren’t up. I told (assistant) Wayne (Taylor), ‘We’ve got to get on them early,’ and we got lucky. We got a squeeze down and they threw the ball into the corner and runners went everywhere and I think that kind of got us going. But then we still kind of flattened out there and didn’t have the emotion we usually have in the dugout. And (Paragould) had it.”

Through four innings, the Sox led 5-2 but they scored twice in the fifth, twice in the sixth and three times in the seventh to earn the run-rule win while Tyler Brown, on in relief of Rutherford, retired the last 12 Paragound batters in succession. 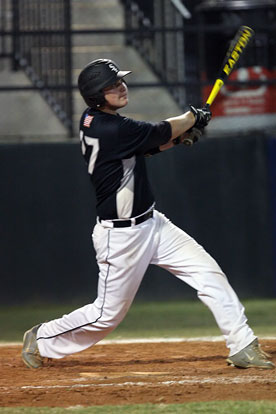 Between them, the two Bryant hurlers limited 7-Up to just three hits. Only one of the runs was earned. Rutherford walked no one and struck out four in three innings while Brown allowed just one hit — a double by the first batter he faced, Pitts.

“When the game stayed 5-2 forever, (Paragould) stayed in the game and was ready to pounce,” Hurt commented. “That’s what I kept telling them, ‘You better stretch this thing out. They’re fired up over there.’ They wanted to play another day. The runs there towards the end kind of ended that, though.”

Hurt was also encouraged by Rutherford’s start. The big right-hander, who was the MVP of the Class 7A State high school tournament for the Bryant Hornets, had struggled in recent outings.

“Nate needed that,” the manager stated. “I think a lot of his is just confidence. Tonight, he had it. He got up there and he had a plan and his stuff was working. And when they’re knocking the ball into the ground like they were, chopping it, then we know the ball’s moving late. He had that late movement again. That was a big plus for us. And, if we need him tomorrow — that’s why we got him out of there because who knows what tomorrow brings. We wanted everybody available other than Jordan (Taylor).”

Taylor pitched a complete game in Bryant’s 3-1 win over Texarkana on Sunday.

Paragould got on the board in the second when Murray reached on an error and Zach Hobbs beat out an infield hit. The duo moved up to second and third on a tapper to Nelson at short. Rutherford struck out Joseph Harris but was then called for a balk that allowed Murray to cross the plate.

Unfazed, however, Rutherford ended the inning by getting Hunter Blanton to ground out to Ozzie Hurt at second, forcing Paragould to strand a runner at third. 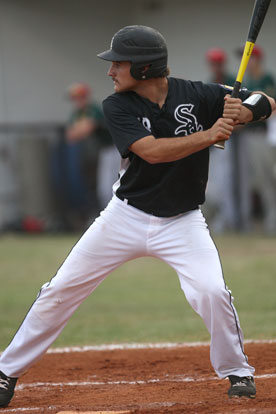 In fact, Rutherford finished up his work on the mound by retiring six in a row.

The Sox got that run back too in the bottom of the third when Pickett drew a one-out walk, Nelson, on a hit-and-run, reached when shortstop Eric Wilcoxson dropped the ball. The duo then worked a double-steal, the first of eight steals in the game by the Black Sox.

With the infield in, Wilson drew a walk and when Zach Graddy drew a free pass, it forced in the run as well as a pitching change.

Nathan Wright took over on the mound and, on a 3-2 count, the Bryant manager tried to surprise 7-Up with another squeeze play. But Hayden Daniel’s bunt found too much air and Wright caught the ball then fired to third to double off Nelson to end the inning.

Brown relieved in the top of the fourth and was greeted by Pitts’ double, which proved to be his team’s last hit of the game and the season. Brown plunked Murray with a pitch. A stellar play by Ozzie Hurt on a grounder to the left of the Bryant second sacker provided the first out of the inning as the runners moved to second and third. The Sox then traded a run for an out when Nelson made the play on a grounder by Nathan Ferguson and threw for the out at first as Pitts scored.

Murray, the last Paragound base-runner of the game as it turned out, was stranded at third when Harris grounded out to Nelson as well.

The game went to the home fifth with Bryant up 5-2. With one out, Nelson walked and stole second. Wilson singled him to third (extending his hitting streak to eight games) and, after he swiped second, Wright came within a strike of getting out of the inning. But Daniel blooped a 1-2 delivery into left-center for a two-run single to make it 7-2.

Mayall, who reached base four times in the game, drew a walk to start the sixth, advanced on a wild pitch and scored when Brown’s grounder to short drew a wild throw to first.

Though he was officially 1 for 2 in the game, Mayall’s batting average actually went down a percentage point. He came in batting a phenomenal .523 on the season. He’s now hit safely in nine games in a row and 23 of the last 24 Sox games.

Brown, who wound up at second on the play, reached third on a passed ball and, after Taylor walked and Paragould changed pitchers, came home on a shot to center by Pickett to increase the lead to 9-2.

The Sox made it a run-rule win in the bottom of the seventh. Daniel drew a walk, stole second and scored on a double by Brown. Mayall, who had walked ahead of Brown’s two-bagger, raced home when Taylor pulled a shot past Murray at first. And when Brown followed Mayall home, the game was over.