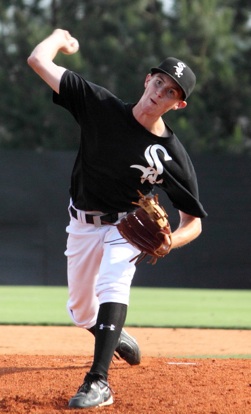 When the hurlers are on, when they’re working quickly and throwing strikes, the defense stays on its toes and focused. The game zips along.

In fact, when Bryant’s Jordan Taylor and Cabot’s Cole Nicholson locked in for a duel Friday evening in the first round of the Ray King Classic at Arkansas State’s Tomlinson Stadium, it took less than 90 minutes. Taylor, with some seventh inning help from Blake Davidson, whipped up a three-hit shutout, making a second-inning run hold up for a 1-0 victory in a crisply-played contest.

Just last Monday, Taylor absorbed the loss in a tough 4-2 game at Cabot, the lone loss of the season for the Black Sox Senior Legion team. Since a three-run first in the previous game, Taylor has allowed just one run over 11 1/3 innings against the Cabot team.

Bryant advances to play Paragould 7-Up on Saturday at 4 p.m. Cabot will face Blytheville in the consolation bracket at 10 a.m.[more] 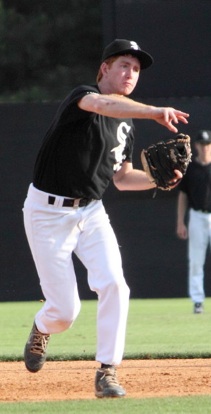 Nicholson allowed just three hits as well but one of those — a two-out, two-strike single up the middle by Landon Pickett — drove in the game’s only run. Brady Butler had drawn a two-out walk then swiped second before coming around to score.

Cabot made a bid to spoil the shutout and the Bryant lead in the top of the seventh, loading the bases with one out. But Davidson came in and, on his third pitch, induced a grounder to second baseman Ozzie Hurt who flipped to Taylor for a force. And when Taylor relayed to Hunter Mayall at first, the Sox had finished off the victory in dramatic fashion.

The two teams are pretty much the same teams that played each other in high school. Cabot added a player from college, Matt Turner, a red-shirt freshman at Henderson State, and Bryant is missing starting outfielder Garrett Bock who’s out nursing a sore hip and catcher B.J. Ellis, unable to swing due to a badly bruised wrist. That’s about all the difference.

They weren’t originally supposed to play each other in Friday’s tournament opener but when Batesville asked out of the event, Cabot stepped in. It was the fourth time this season they’d played — a fifth meeting is set for Monday at Bryant.

Needless to say, the two teams know each other.

And that played into the strategy. Cabot is usually a strong, good-hitting team but like many power hitting teams, they like to extend their arms on their swings and produce some bat speed.

On Friday, however, Taylor jammed them time and time again with fastballs while keeping them off balance with changes and curves away. With excellent command, he executed the pitches being called by Sox coach Wayne Taylor, his dad. 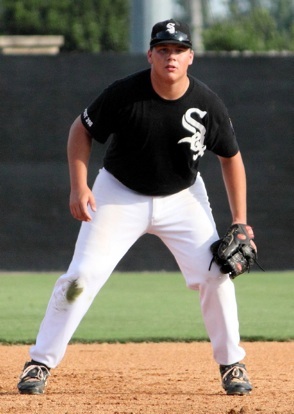 “Not only did Jordan throw a great game, Wayne called a great game,” acknowledged Bryant manager Darren Hurt. “They were on the same page the whole game. Jordan hit every spot tonight. We worked them in, out. He changed speeds the whole game. They both did a heck of a job.”

The right-hander struck out the side around a single to center by Turner in the first, then fanned another in the second but, by repeatedly getting in on the hands of the Cabot batters, he induced 10 groundouts and three infield pops. Turner’s hit was the only one Cabot managed through six innings. The only other baserunner was Tyler Erickson who was hit by a pitch to lead off the third. But Taylor got Nicholson to tap back to the mound to start a doubleplay.

That started a stretch in which Taylor retired 12 in a row. Turner ended that stretch with his second hit, singling up the middle again after fouling off a pair of tough 2-2 deliveries.

Turner stole second then Powell Bryant, who had homered against Taylor on Monday, blooped a single to left.

Cabot tried to steal a run when, with Andrew Reynolds at the plate, Bryant broke early and drew a throw. He tried to stay in a rundown to allow Turner to score but Turner wound up having to dive back in to third on a throw there by Ozzie Hurt. Bryant made it to second so the Sox issued an intentional walk to Reynolds to load the bases and set up a force at every base.

Davidson, fresh from a victorious outing against Sylvan Hills on Tuesday and scheduled to start against Paragould on Saturday, fired a pair of strikes before Steele hit the game-ending bouncer, a taylor-made (pun-intended) two-ball.

“We talked to him,” Darren Hurt said regarding Davidson’s relief stint. “He’d thrown a 25-pitch bullpen already. He said he felt good and could get us a groundball.”

Nicholson was tough too. He retired the first five Sox before issuing the four-pitch walk to Butler in the second. He got Pickett down in the count 1-2 but the Sox’ hitter stayed alive by fouling off three pitches before bouncing the proverbial seeing-eye single past Nicholson and between shortstop Matt Evans and second baseman Tyler Erickson.

After that, the Cabot right-hander worked around the game’s only error in the third. Caleb Garrett reached on the play, advancing to second on the bad throw, then took third on a grounder to short but was stranded when Mayall bounced out to second.

Nicholson retired seven in a row before Tyler Brown singled with two down in the fifth. He issued his second walk with two away in the sixth as Chris Joiner got on base. Brennan Bullock followed with a single to left but Nicholson got off the hook when Butler’s deep drive to center into the teeth of a pretty good breeze was hunted down by Joe Bryant to end the inning.

Darren Hurt said the team started out aggressively at the plate.

“We went to changing that strategy later,” he said. “Nothing seemed to work. We knew (Nicholson) had a good change-up. The guys had faced him early in the year. But, we wanted to hit his fastball so we were trying to get on him early.

“We were a little too aggressive,” he added. “He caught on, so early in the counts, he was throwing us something else and we were swinging at pitches away and in the dirt. We tried to pull them back in later and just get some base-runners because we felt like we could move guys if we could get them on. We just couldn’t get them on.”

Credit the Cabot defense which tracked down some well-hit balls, particularly early. Nicholson only fanned one batter.