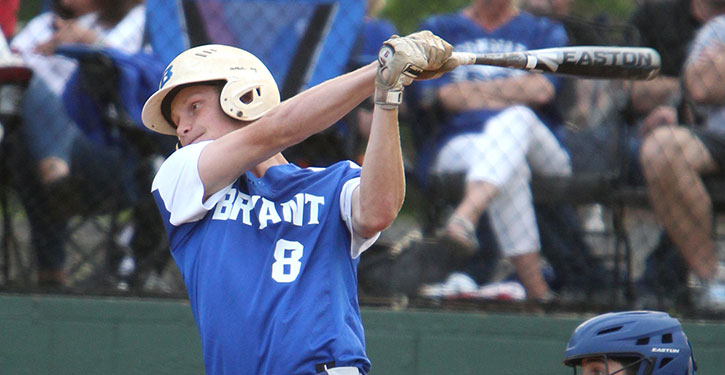 CONWAY — At Bryant, the baseball field measures 325 or 330 feet down the lines, 365 in the alleys and 395 to center with a high green wall. Few homers are hit there by anyone. You can usually count on one hand how many are hit in a given season.

On Monday, in their final regular-season and 6A-Central Conference game at Conway, the Hornets unloaded with three homeruns including two by junior Gage Stark, who drove in three and led the Hornets to a 4-3 victory over the Wampus Cats.

Logan Chambers hit the other round-tripper, a solo shot in the third.

Neither Stark nor Chambers had hit a home run this season before Monday night. In fact, Stark’s were the first two of his high school career.

The Hornets, who had already sewed up the regular-season league championship and the top seed at the 6A-State Tournament in Rogers, which begins this Thursday, improved to 13-1 in the conference and 27-4 overall.

They will open play at State on Friday at noon against the winner of Thursday’s game between North Little Rock, the 5 seed from the Central, and Van Buren, the 4 seed from the West.

Stark hit a solo blast on an 0-2 pitch in the second inning, but the Hornets trailed 3-2 going into the fifth. With two away, Jake Wright worked a walk, and, on a 3-1 pitch, Stark clubbed his second homer down the left-field line.

No one could remember the last time a Hornets’ player hit two homers in a game. Perhaps you’d have to go back to the days when Bryant played its home games on the Babe Ruth Field at Ashley Park.

Chambers, who was hitting .402 a week ago before he got a new pair of glasses, had his second three-hit game since. He was on base four times, including by catcher’s interference in the fourth.

Both teams worked in several pitchers as they prepare for State. Conway used five and the fourth one, Ben Weese, surrendered Stark’s second blast and absorbed the loss. For Bryant, Austin Ledbetter, the third Hornets’ pitcher, earned the win and Coby Greiner finished to earn his seventh save of the season, which may be a school record too.

“That was a playoff game,” declared Hornets head coach Travis Queck. “The way it ended, the way you put guys in situations. And what we did at the end in our conversations was point out, ‘Now we’re down to ones, okay? One mistake here or one pitch there or whatever could be the season. So, we’ve got to focus on the details.’”

The contest was originally scheduled for Friday but was postponed due to heavy weather.

“I can’t stand Monday games,” Queck said. “We’ve got to do a better job of coming to the yard prepared for any situation.”

Conway came into the game with a chance to earn the three seed for State. They’ll be fourth and open State against probably Springdale Har-Ber, the fifth seed from the West, on Thursday at noon.

The Hornets had base-runners aboard in all but the seventh inning. In the first, Chambers doubled, and Austin Ledbetter walked with one out. But the Cats turned a doubleplay to avoid any scoring.

Senior Will McEntire allowed two singles in the bottom of the inning but forced Conway to strand them.

In the second, there were two outs when Stark unloaded for his first bomb. Logan Grant followed with a double and Greiner hit a shot to center only to have it flagged down by Conway’s Cade Stewart.

Grant fanned two as he set down the side in order in the home second.

In the third, Chambers led off with his homer to the gap in left-center. Noah Davis drew a walk and, after Ledbetter sacrificed him to second, Cade Drennan walked as well.

That was the end for Conway’s second pitcher, Drew Freyaldenhoven, who had relieved to start the inning. Lefty Thomas McNabb relieved and fanned the first three he faced, two to end the third and one to start the fourth.

In the interim, Conway picked up a run to cut it to 2-1. Grant struck Logan French and Stewart, the first two he faced in the inning. Ledbetter relieved and surrendered a single to James Hicks that loaded the bases. Cade White’s sacrifice fly to left got the run home before Ledbetter set down the next two.

Walks to Grant and Greiner with one down in the top of the fourth gave the Hornets a chance to expand the lead. Chambers reached when his bat ticked the glove of catcher Caleb Cahill on a foul fly to left.

With the bases full, however, McNabb wriggled off the hook with a strikeout and a groundout.

And, in the bottom for the fourth, Conway scored two unearned runs to take the lead.

Cahill reached on an infield hit that ticked off the top of Ledbetter’s glove. But the next two were set down.

Courtesy runner Sam Stroth had taken second on a wild pitch, but Ledbetter was within a strike of getting out of the inning unscathed. He got Coby Cormel to hit a hard grounder to second. But it was booted and Stroth scored from third.

Stewart singled and, when the throw from the outfield sailed over the cut-off man, Stewart wound up at second. That brought up Hicks, who hit a chopper that Greiner, playing short, got to in fine fashion only to unleash an errant throw. Cormel scored to make it 3-2.

Ledbetter ended the debacle by striking out White.

That set up Stark’s two-out, two-run blast in the top of the fifth that put the Hornets back in fron

Reed Hughes led off the home fifth with an infield hit but when Clay Tollett hit a grounder to Greiner at short, Hughes slid in to second late as Greiner got the force on a toss to Davis. Hughes upended Davis as he tried to relay to first and was called for interference. Tollett was ruled out at first.

Chambers singled with one out in the top of the sixth against Conway’s fifth pitcher, Hicks. But he was thrown out trying to steal and Hicks ended the inning with a strikeout.

Greiner relieved in the bottom of the sixth and walked Cameron Leech to start the inning. Logan Seifert tried to sacrifice but Greiner bounced off the mound, whirled and threw to second just in time for a force.

Cormel grounded out to first then Stewart was hit by a pitch to put the potential go-ahead run on base. But Greiner induced a comebacker off Hicks’ bat to end the threat.

In the seventh, Greinr fanned White then Hughes belted a shot off the fence in left that, off the bat, looked like it might get out for a game-tying homer. But Wright fielded the ball quickly and fired in to Davis at second in time to retire Hughes.

That took a lot of the starch out of Conway’s hopes of a rally. Tollett followed with a foul pop near the Conway on-deck circle. First baseman Peyton Dillon rushed to the fence and made a basket catch to end the game.

“We got to see some arms,” Queck acknowledged. “We got to make adjustments at the plate with all their different arms.

“It was just one of those grind-it-out wins,” he conclueded. “You know, the seeding’s already set for us. Maybe some think you should be able to just come in and walk through it, but you can never walk through it with Coach (Noel) Boucher and Conway.”