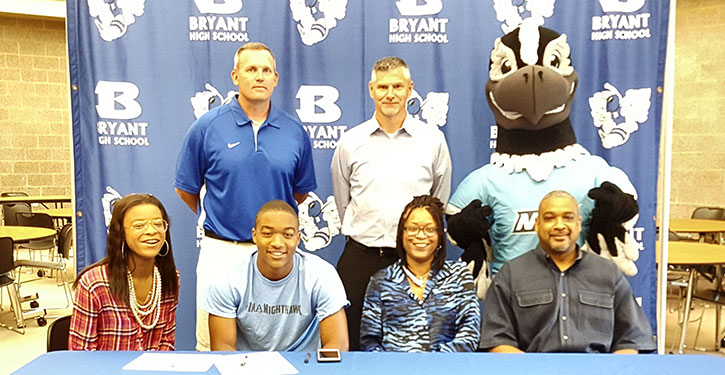 Steen, even though he was a vital cog as a starter for very good Bryant Hornets teams over the last two years, only started playing school ball as a sophomore. He came a long way in a hurry.

In their quest for getting off the ground, the Nighthawks’ coach Jason Hudnell held tryouts recently. Bryant head coach Mike Abrahamson got word of it and one day during a weight-room workout, he told the Hornets seniors who hadn’t signed or committed yet.

“A couple of them went including Braylen,” he recalled. “He really wants to do this. (The tryout) was on prom day when most other people are spending all day thinking about getting ready, dressing up and everything. But he went down and did this and hustled back and got ready and still made the prom.

“He impressed the coach and the coach called me that Monday,” Abrahamson added. “They really like him and it was just the normal recruiting process from there.”

“(Coach Hudnell) said he was wondering why I was still on the market because I was an outstanding player,” Steen recalled. “He told me he really wanted me to become a Nighthawk and I told him I’d like to be a part of the team.

“After we finished, I called Coach A and thanked him for it, for looking out for me because I think it’s pretty much like Bryant there,” he added. “I like that. The colors and stuff were pretty much the same too. So I think it’ll pretty much be home.

“I went back two weeks ago, my mom and I, to tour. Coach Hudnell showed us around. I think it’ll be a decent environment to be around.”

Steen moved to Bryant when he was in fifth grade, going to Davis Elementary. He went to Bryant Middle School and tried out for basketball in seventh grade.

“I was trying out every year in middle school but I guess I was too short or wasn’t really prepared to play,” he recalled. He transferred to Little Rock Central for his freshman season and made the first cut but not the second. He returned to Bryant for his sophomore year.

“When I came back from Central, Coach A gave me an opportunity,” Steen related. “He said he was going to give me three days to try out and they would pick me up if I do good. I was a good rebounder at the time so he thought he could work with me. Plus, I was one of the tallest on the team at the time.

“Braylen is one of the most improved players that I’ve coached, from the time I met him to the time he was done playing for me,” Abrahamson said. “He never had played school basketball so when we got him — I say this respectfully — he didn’t know how to practice. He didn’t know what it meant to work hard, to practice at a pace that we wanted to do. But he adjusted and adapted.

“He played JV his sophomore year, didn’t get a lot of varsity time but just stayed at it,” the coach continued. “He did a good job of listening to me telling him what I thought he should do. To his credit, he went out and did it whereas a lot of young people these days, they complicate things.

“I liked his attitude,” he mentioned. “He was trying to improve and playing with that demeanor. He went from playing behind some guys to passing up some guys in terms of pecking order on the team. He worked hard and he’s going to keep doing it.”

Said Steen, “I was playing junior varsity at the time and he was telling me I could’ve played varsity but my head wasn’t in the right place and I sabotaged myself in practices. But, as we kept going through it, I was able to mature, playing with my teammates. They made sure I grew up and stopped being childish.”

“I saw how he could fit in for us then he grew a little bit” Abrahamson said. “He got a lot bigger and stronger.”

“I think I just wanted it more than anybody,” he said of his rebounding prowess. “I guess that part of the game I really paid attention to. I was like, ‘If I can just rebound, get the ball to my players, maybe I can stay on the court just by playing defense and rebounding.”

As for his shooting, that came around too after his sophomore year.

“Coach A was helping me out at practice,” Steen recalled. “I used to shoot with two hands and he was telling me that wasn’t the right way to shoot. He showed me how to guide the ball with my left hand and get my form correct with my right. I just kept working on it.

“He’s still getting stronger and working on other parts of his game, his ball-handling and things like that,” he continued. “He became for us a guy that, as a sophomore, barely saw the floor on varsity to someone we really counted on as a senior. He had some really good games. Two games that stick out to me in his career: His junior year, we had Conway here at home, he had 15 points and 14 rebounds. Then, of course, the game at Bentonville against Wynne when he had 30 points and 10 rebounds when we played at 8 o’clock in the morning.”

Reflecting on the success of the team the last two seasons including the 2016 team that came a shot away from playing for a State championship, Steen said, “I feel like, we accomplished pretty much everything we thought we would besides winning a championship. It was successful. It was just odd for me to be on a team anyway. I just wanted to go out and show everybody that I was meant to be on the court. I was just trying to help my team win games and help Coach A like he helped us.”

“I was the first one to give him a chance but he took that chance and he seized it,” Abrahamson allowed. “That doesn’t always happen. So, we’re proud of him.”