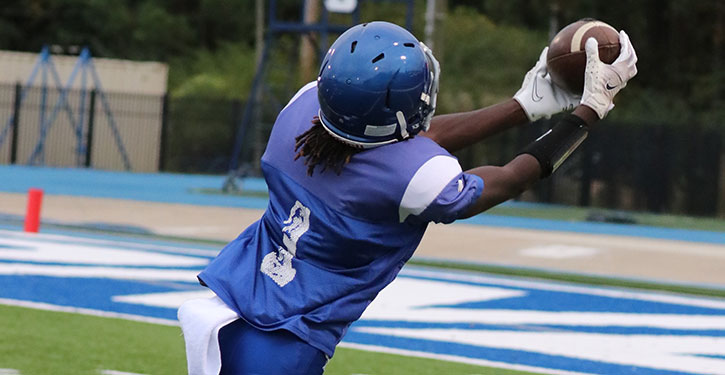 The question has become a football cliché. When a team faces fourth-and-long, say a fourth-and-23, someone chirps, “What play do they have in the playbook for fourth-and-23?”

The quip plays fun with the idea that no one really has a play for that kind of situation that’s got much of a chance of working.

But for Josh Akers, the head coach of the Bryant Blue Hornets eighth grade team, and his staff, it’s simple:

Give the ball to Jaysean Robinson, have your stout offensive line give him a good start then watch him run around, past and through the defense.

Such was the case early in the Hornets’ game against the El Dorado Wildkittens eighth grade team on Thursday night on Everett Field at Hornets Stadium. On the first drive of the night, Blue drove to the El Dorado 16. But a bad snap cost them yardage on second down and a third-down play resulted in quarterback Jordan Walker getting sacked by the Wildkittens’ Tahmadai White at the 29.

That brought up the fourth-and-23. Robinson not only got the first down, he scored from 29 yards out. The two teams traded licks in the first half and, at intermission, the Hornets were clinging to a 28-22 lead after they’d built a 28-8 advantage early.

The second half was kind of the opposite as the defenses stepped up. Twice El Dorado got inside the 20 and twice got turned back, first by an interception by Jonathan Frost at the 4. Later, with the lead in the game on the line, the Hornets turned back the Wildkittens on downs after they’d marched to the Bryant 3 and had first and goal there.

To seal the victory in the final minute, Blue’s Ryan Reynolds intercepted a pass and returned it 69 yards for a clinching touchdown as the Hornets preserved their unbeaten record with a hard-fought 36-22 victory.

Bryant Blue improved to 6-0 on the season going into a trip to Benton on Thursday, Oct. 15. They go to Conway White on Oct. 29 then close out the season at North Little Rock on Nov. 3.

Robinson finished with 133 yards and two touchdowns on 14 rushes.

Frost actually had two interceptions. He also caught two of Jordan Walker’s passes on offense for 102 yards and a TD.

But the big moment was that fourth-quarter defensive stand by the Hornets. El Dorado had driven from its own 27 to the Bryant 3. The big play was a 35-yard pass from Kerry Shelton to J Prince Roberson. They faced a fourth-down along the way, but Shelton found running back Jiquaeveon Jefferson with a swing pass that picked up 12 and a new set of downs.

Once the Kittens got to the 3, the middle of the Bryant defense smothered a run by Jefferson. A second try by the big Kittens’ running back was stopped at the 1 by J.T. Allen and Landon Jackson.

That set up a third-down at the 1. This time, Jefferson was dropped for a loss by Braxton Speer.

Needing a touchdown to take the lead, the Kittens went for it on fourth-and-goal at the 3. The Hornets rush flushed Shelton out of the pocket. He rolled left and got the ball to Evan Wilson, but he was stopped for a 2-yard loss by Gavyn Benson and the Hornets took over on downs.

Spurred by Walker’s 45-yard pass to Frost, the Hornets made a bid to run out the clock, but a major penalty set them back and this time, they were unable to convert a fourth-and-14.

El Dorado got the ball back at the Bryant 46 with 1:21 left to play. Two plays into the possession, however, Reynolds came through with the pick-6. Robinson ran in the two-point conversion to set the final score.

Bryant Blue’s opening drive, which was capped by the Robinson run on fourth down, was answered by the Kittens. On a fourth-and-4, they ran a reverse to Dominique Grimes, who raced 54 yards for a touchdown.

It was the first of three for Graves. Jefferson ran in the two-point conversion and the Hornets found themselves trailing 8-6.

But not for long. On the first play of the next possession, Walker threw deep to Frost, who made a fingertip catch inside the 20 and rolled on into the end zone for a 57-yard TD strike, which put the Hornets ahead for good.

Three plays later, Frost’s first interception occurred at the El Dorado 46. He returned it to the 3. Robinson scored a play later from the 1, making it 20-8.

El Dorado turned the ball over on downs at its own 29. Allen and Jordan Canfield led a slew of Hornets who stood up Shelton when he tried to keep on a fourth-and-1.

A play into Bryant Blue’s subsequent drive, Walker passed to Allen for 10 yards. On the next snap, the quarterback kept and scored from the 19. And when he passed to Karter Ratliff for the two-point conversion, it was 28-8 with 4:34 left in the half.

It looked like El Dorado’s subsequent drive had stalled when they faced a fourth-and-3 at the Bryant 49. But a hard count drew the Hornets offsides for a fresh set of downs. Moments later, Allen sacked Shelton for a loss of 7. But, on the next play, Shelton threw a short pass to Roberson for 31 yards.

That set up Shelton’s swing pass to Grimes, who turned it into a 25-yard touchdown pass with 1:56 left in the half.

In turn, the Hornets went three-and-out. Walker dropped back to punt, but a low snap forced him to try to run. He was stopped for no gain and, with :54 left, the Wildkittens had just 5 yards to paydirt.

Despite the fact that Roberson was dropped for a 6-yard loss on second down, Grimes took another swing pass from Shelton and zig-zagged through the Hornets’ defense for a 10-yard touchdown. With Shelton’s pass to Grimes for a two-point conversion it was 28-22 at the half.

And the Wildkittens were set to receive the second-half kickoff.

A strong return from Thomas Smith had them in good field position at their own 47. Aided by a major face mask penalty, the Kittens reached the Bryant 17. But on the very next play, Frost made his second interception at the 4.

Behind the running of Robinson and Allen behind the Blue o-line, the Hornets marched to the El Dorado 14. But a major penalty pushed them back and they stalled, turning the ball over on downs at the 27.

That set up the Kittens’ drive inside the Bryant 5 where the defense made its stand.