PEARCY — It took a bit for the Bryant Lady Hornets freshman team to knock off the rust from their Christmas break but once they did, they went off left the Hot Springs Lady Trojans freshmen in their wake in the first round of the annual Kameron Hale Invitational Tournanent at Lake Hamilton High School on Wednesday.

Now 9-2 on the season with the 32-23 win, the Lady Hornets are set to face Mena in the winners bracket semifinals on Thursday at 3 p.m.

The Lady Hornets fell behind 7-0 but sparked by Lexi Taylor and Celena Martin, surged into the lead.

“We got off to a slow start the first quarter,” acknowledged Lady Hornets coach Nathan Castaldi. “Celena and Lexi really got us going the final couple of minutes of the first and then the second. They each converted a three-point play and then Lexi hit a 3.”

The 7-0 deficit was thus turned into a 9-7 lead. By halftime, Bryant held an 18-14 advantage. The Lady Hornets then held Hot Springs to 1 point in the third quarter.

“We had a real good defensive effort all game but especially the second half,” Castaldi said. “Hot Springs only made one shot, a 3 at the buzzer. The rest were on (six) free throws.”

Taylor was named player of the game and finished with a team-high 10 points. Martin added 8 with Ivory Russ scoring 6, Tiyanna Robinson 4. Mekycia Baker and Tierra Trotter scored 2 each. 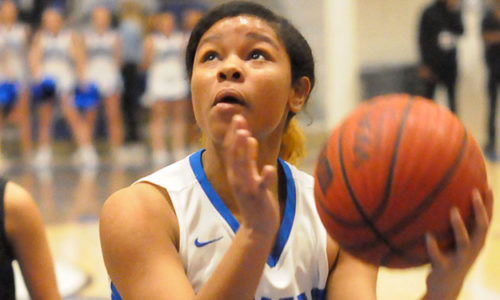