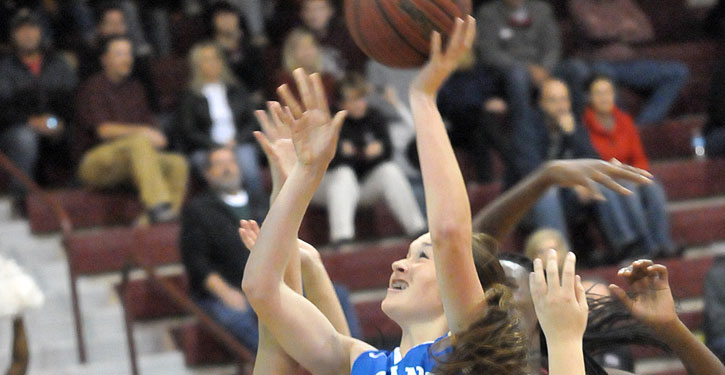 BEEBE — After trailing by as many as 12 points in the first half, the Bryant Lady Hornets rallied to within a point of the Harding Academy Lady Wildcats three times in the fourth quarter. But they could never take the lead. It was still a one-possession game with just 2:46 left to play but Harding Academy converted 10 of 10 free throws in the final 1:30 on the way to a 51-40 win on Wednesday in the first round of the Badger Christmas Classic at Beebe High School.

Bryant, playing without two of their top scorers due to injury, will try to bounce back on Thursday at 10 a.m., against Bauxite in the consolation bracket.

“Our kids are working hard,” he noted. “We had five or six really good practices over the break. The first game back and, offensively, we were a little stagnant in the first half. We still got some looks. We started finishing better, more aggressive in the second half. We’ve got to continue to do that.”

The Lady Hornets forced 23 turnovers, many on steals but they couldn’t consistently cash them in. The start of the second half provided an example of their frustration in that regard.

Trailing 24-15, the Lady Hornets forced a turnover to start but a contested shot inside refused to fall. Mary Catherine Selig and Lania Ratliff combined on a steal but the Lady Hornets turned it back over. Ratliff and Kendal Rogers teamed up to cause a turnover but a shot at the other end rimmed out.

Finally, Selig made a steal and a layup. Later, Ratliff made another theft and Selig, the Lady Hornets sophomore who led all scorers with 16 points in the game, cashed in, cutting the Harding lead to 24-19 and forcing a Lady Wildcats’ timeout.

“I thought our defense was good,” Matthews said. “We’ve got a little length this year. It’s the first time we’ve had that in a while. We’re trying to get out in the passing lanes and force some lobs, force some slow bounce passes. We’re starting to do that a little bit more and little bit more.”

After the timeout, Harding pushed the lead back to 10 despite Selig and Kalia Walker combining on a steal along the way.

With 1:11 left in the third quarter, Allison Steen drove and banked in a shot. Bryant’s Riley Hill took a charge to get the Lady Hornets another shot in the closing seconds and Walker drained a 3 with :09 to go, making it 29-24 going into the fourth quarter.

Another Harding turnover resulted in a basket by Steen as she was fouled. Though she was unable to add the free throw, it continued Bryant’s momentum. A drive to the hoop by the Lady Wildcats’ Elaine Halpenstill interrupted the run but Walker fed Selig for a counter hoop.

And when Rogers converted two free throws with 6:04 to go, the Harding lead was trimmed to 31-30.

The Lady Hornets had a chance to take the lead after Harding’s Alden Graves missed a 3-point try but Rogers’ shot wouldn’t go.

Two free throws by Brittain Harlow increased the Lady Cats’ lead but both teams missed 3-point tries. With 5:00 showing, Selig knocked down a pair of free throws to make it 33-32.

Harding’s Layne Pace hit a free throw and Bryant turned the ball over. Audrey Laird tried a 3 but it came off the iron. Steen battled for the rebound and eventually tapped it to Selig. With 4:06 left, Ratliff went to the line with a chance to tie it. But only her first shot went in and Harding maintained a 34-33 edge.

The pattern seemed to be continuing when Harlow converted two free throws but, this time, the Lady Hornets were unable to get an answering shot to go. With 3:28 to go, Graves nailed a triple to extend the Harding lead to 39-33.

The Lady Hornets kept in the game when Selig hit a free throw as Helpenstill (13 points, eight rebounds) fouled out. Steen and Walker combined to force a turnover and Walker hit a flying layup to get it back to 39-36.

And it appeared Bryant would have a chance to get it closer again when Harlow missed. Steen collected the rebound but Harding’s Sloane Wiedower snatched it out of her hands and scored to make it 41-36.

An empty trip to the free-throw line for the Lady Hornets helped set up the Lady Wildcats’ closing push.

With 1:39 left, Laird missed two free throws only to have the second miss come off the iron long. Harlow chased it down and, after that, the Lady Wildcats began their parade to the free-throw line.

The lead grew to 45-38 before Hill fed Steen for a basket with :50 left. Though it appeared there was foul on the play, none was called. Harding closed it out with more free throws.

“We had a chance there at the end,” acknowledged Matthews. “They just made a few more plays down the stretch.”

Harding ran the lead to 21-9 by the 2:30 mark of the second quarter. Matthews called a timeout and the Lady Hornets regrouped a bit. Two free throws by Selig were followed up with a turnover that she and Walker forced. A layup for Walker was the result, cutting the margin to 8.

But Pace hit a 3 to curb the momentum. Selig added a pair of free throws then Steen swiped a pass only to have a turnover result as the game went to the half with Harding up 24-15.