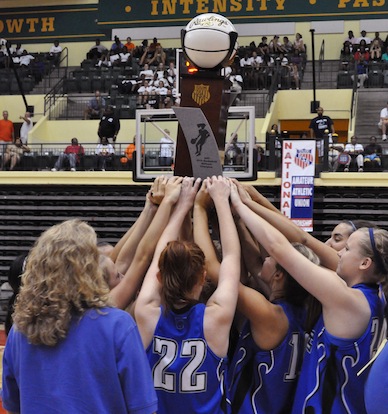 The tournament was held at Disney’s ESPN Wide World Sports. The Arkansas squad defeated Kentucky Blast, 47-38, for the championship on July 10.

Among other prizes, the players brought home the national trophy and will each be receiving special rings marking their National AAU victory.

The team faced a grueling schedule that started on July 5 and spanned six full days as they won their way to a berth in the championship against Kentucky. They emerged from team pool play as one of two top-seeded teams in the tournament.

Team Arkansas Elite was the team to beat.

And no one did.

Proclamations of Congratulations from State Representatives Ann Clemmer and Dawn Creekmore and State Senator Shane Broadway are being presented to each team member.

Coach Rebecca Davis has expressed her thanks to all the staff and supporters of the team who helped make the championship run possible. Davis was an AAU All-American player, and was a member of the Bryant Lady Hornets’ 1989 State Championship team.

Arkansas Hoops, another 14-and-under team, qualified for participation in the national tournament and, while falling to Team Arkansas Elite, they went on to finish fifth in the tournament out of 36 teams from across the nation.

“It has been a great time in Arkansas for youth amateur sports,” Meyer noted. “Congratulations to Team Arkansas Elite and to the Arkansas Hoops for making the state proud!”

The Amateur Athletic Union (AAU), a historic organization that is one of the largest non-profit volunteer sports groups in the United States sponsored the tournament. The AAU was once responsible for the Olympic Games until the passage of the Amateur Sports Act of 1978 establishing the Olympic Committee.

Today, the AAU focuses on the promotion and development of amateur sports and physical fitness programs.