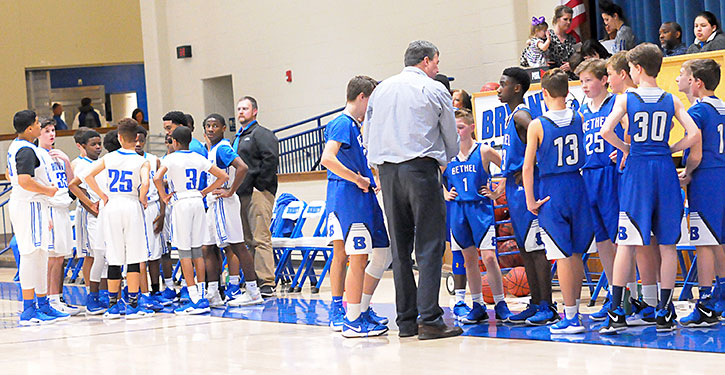 The White Hornets were clinging to a 14-13 lead at the half after trailing 5-2 at the end of the first quarter. Blue’s Gideon Motes and Cairon Allen each had a basket in that first period. R.J. Newton had the lone basket for White.

Kellen Robinson sparked White in the second quarter with 8 points including a pair of 3-pointers. Justin Myles and T.J. Lindsey also had baskets. Allen, Motes, Cason Trickey and L.C. Pitts each had a basket for Blue.

The game-breaking third quarter, Lindsey had 4 points and Grant Johnson hit the first of his two 3-pointers. Robinson added a free throw.

With a 3 from Logan Geissler, a basket by Allen and a free throw from Motes, Blue tried to rally in the final stanza, but Johnson hit another 3 as part of his 7 points in the quarter. Lindsey and Mytorian Singleton scored as well.

Johnson finished with 10, Robinson 9, Lindsey 8. Allen led Blue with 6, Motes had 5 with Geissler and Trickey adding 3 each.

“We knew this game would be different than the first game we played Bethel,” said Bryant White coach Richard Wrightner. “Bethel is a really good team and they are very athletic, and well coached. They are a fundamental basketball team, so they capitalize well when you make mistakes.

“I thought we got off to a slow start,” he added. “We did not move well in transition in the first half. We didn’t start the game with high intensity like we normally do.

“After halftime, the defense picked up,” the coach said. “We started rebounding well, made a few big shots, and forced Bethel to turn the ball over. All in all, I think we did well, and I am proud of our boys.”

Bryant White, now 7-1 on the season, returns to action at home against Lake Hamilton on Tuesday, Jan. 22.