This time, Hornets hope to still be on top alone after playing Cabot 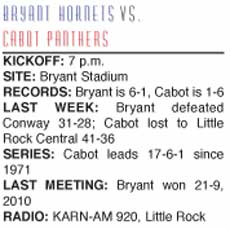 But for the Cabot Panthers, the Bryant Hornets would’ve won the 7A/6A-Central Conference championship of 2010 outright. And, instead of being the No. 4 seed from the league (despite sharing the conference title), they’d have been seeded no worse than second (behind plug-in top seed West Memphis) and earned a first-round bye and a second-round home game in the State playoffs.

And they’d have avoided the dreaded repeat champion Bentonville Tigers in the second round.

So, even though it’s the eighth week of the 10-week regular season, the Hornets should know that their[more] post-season fortunes are being affected.

While acknowledging the fact that, this season, the Panthers are just 1-6 to Bryant’s 6-1, Hornets head coach Paul Calley knows how dangerous tonight’s rematch at Bryant Stadium is. They may be young. They may be struggling. But on any given night when Cabot gets the old dead-T in gear, it can be a tough night that’s over before you know what hit you.

“This is the ultimate trap game,” he said. “We’ve talked about it. (The players) do look at (the standings) because when we played Van Buren and when we played Russellville, we played to the level of our competition. When we played Catholic and Conway, we played better.

“We’ve tried to preach to them this week that the games that we have on film (of Cabot), they could’ve won all three,” Calley added. “They had field position. They had opportunities and they ended up turning the ball over.”

Though 0-4 in conference play, the Panthers can still win out and get in the playoffs.

Just like last year, the Hornets come into the game off a big win over Conway. They’re unbeaten in conference play, atop the standings again.

Last season, Cabot’s 21-9 win over the Hornets produced a three-way tie for first, something that held up to the end of the season. Something they’d like to avoid this year.

The Hornets never led in last season’s game. Once the Panthers get a lead, they milk it and the clock for all their worth.

“We had a good drive going last year in the first quarter, running the ball, throwing short passes,” recalled Hornets head coach Paul Calley. “I elected to throw one deep and it got picked off. That’s a possession that cost us in the end.

“We had seven possessions in last year’s game and two of those were at the ends of the halves,” he noted. “The last one, the game had already been decided. So we had six legitimate possessions.”

That’s what Cabot will do to you and knowing that they’re hard to stop — often using all four downs to get the 10 for a first — success on every offensive possession becomes vital. It creates urgency that can benefit a team or hinder it.

“I thought we played well off our big victory over Conway,” Calley continued regarding last year’s battle. “We just couldn’t stop (Cabot). They kept going for it on fourth down. We couldn’t make them punt. And then, late in the fourth, we got down there with a chance to score and we turn it over on downs and they kept the ball pretty much the remainder of the fourth quarter then hit the big pass to go up two scores at the end.

“I second-guess a lot of things that we did but, in the end, we have to score when we have the ball and we have to force them to punt at least twice,” he asserted. “If we don’t, then we may not win. And you can’t settle for field goals. Last year, we were at the 2-yard line. We couldn’t punch it in and they’re so tough in the red zone against the run.

“Of course, we’re not a power run team now,” the coach mentioned. “We’re going to have to throw it. When you throw it some bad things can happen like last week. When you’re forced to throw the football, they get pressure on you — which they’re going to bring — if you don’t do everything exactly right, you’re going to have problems.”

Cabot is still playing smash-mouth football, running the offense out of the time-munching dead T. Like the other two teams on the Hornets’ schedule, North Little Rock and Little Rock Central, the Panthers have a solid power running game, something the Hornets’ defense hasn’t faced much this season to date and something, with their lack of size up front, could be particularly tough to handle.

Every year, the Hornets’ coaches change their defensive alignment to deal with the Panthers.

“They force you into doing things that are uncharacteristic,” Calley said.

Over the last five seasons since Cabot and Bryant have been in the same conference, the Panthers have been as tough as anybody on the Hornets. Of the five regular contenders in the league (including Conway, Catholic and Central) the Hornets have lost more than once in that five-year span only to Cabot and North Little Rock.

Calley was proud of his team’s perseverance in the win over Conway last Friday. The Hornets built a 28-7 halftime lead. Conway rallied in the second half to tie it before Bryant’s Jace Denker kicked a game-winning field goal in the final minute of the game.

“These guys are starting to come around,” Calley said of his team. “They’re starting to grow up. We saw that in the first half last week. We can do some good things.

“For example, our first possession of the second half, we take it down inside the 10,” he recounted. “We have a second-and-four and we have a miscommunication on the play. We went the wrong way. There’s a hole you can drive a truck through going into the end zone and we’re on the wrong side of it. We have to eat it, lose those yards, miss a field goal and it was all downhill after that. We made mistake after mistake after mistake and it wasn’t the quarterback. It wasn’t all his fault. The offensive line made mistakes, the running backs made mistakes, the receivers made mistakes. And it was somebody different on every play.

“That’s part of the maturation process,” Calley mentioned. “You have got to be on the same page.

“Defensively, (Conway) started running the quarterback a little more,” the coach recalled. “They hadn’t done that all year. They got in a bind, they had to do it and they did it. And that’s the person you can’t account for.

“The field position was a factor,” he concluded. “You look at the odds of scoring when you get the ball on the plus side of the 50. They go up tremendously. When you get it on the plus-side of the 30, it’s even greater. Momentum is a powerful, powerful thing and when they got it they kept it.”

No doubt, momentum will be crucial tonight as well.