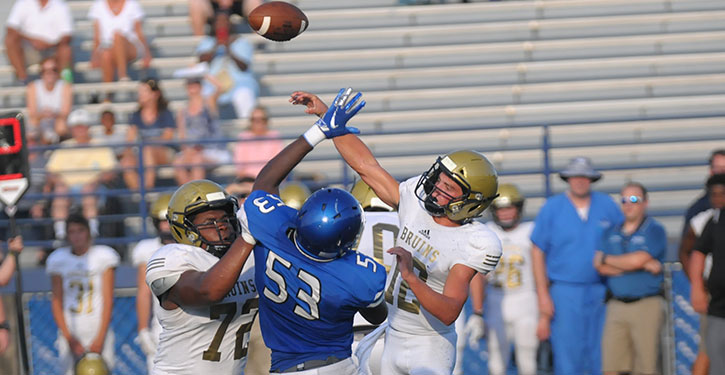 Though not as far along as usual, Hornets scrimmage at Pulaski Academy tonight

The next step for the Bryant Hornets football team in a year like no other comes tonight when they head to Little Rock for a pre-season scrimmage against the Pulaski Academy Bruins, starting at 6 p.m.

That’s because COVID-19 changed everything starting last spring. It prevented the two-time defending State champions, along with all the other high school teams in the state, from having spring practice and the usual summer work.

“This is where we expect to be at the end of spring football,” James said. “That’s without team camps, 7 on 7, fall practice and all that.

“It’s a lot different gauge this year and I think that’s what a lot of us are going to go through for the next two or three weeks,” the coach acknowledged. “It’s going to be that way for a lot of schools, not just Bryant.

“Numbers hurt us just like not having enough numbers hurts other people,” he mentioned. “Because we have so many more kids — we’re trying to teach and trying to get everyone up to speed. We’re coaching third and fourth team guys as much as we do first team, getting them the same amount of reps.”

Bryant has over 140 players out this season.

And they are grateful to be allowed to play.

“Conditioning’s always a factor for me this time of year,” the coach said. “I don’t want kids out there struggling and continuing to play. I want to get them out because you get injured when you’re struggling, when you’re thinking, and you’re not play full speed.”

And what else with James be looking at tonight?

“I’m looking for specific spots on the field both offensively and defensively, places we need to improve,” he related. “We’ve got experience in some places and I don’t need to know what they can do as much as maybe some other groups. So, we will target some of those guys and try to get them the reps that they need. And some that don’t need a lot of reps, we’re not going to over-rep them.”

The Hornets are inexperienced primarily on defense, in the line and at linebacker.

“We’ve still got 10 days after tonight,” James mentioned, regarding the season-opening Salt Bowl against Benton at War Memorial Stadium in Little Rock on Saturday, Aug. 29. “We scrimmaged last week. We scrimmaged at the end of the first week. So, this will be our third scrimmage.

“I like to get better during the season. I’ve always said that. I want to be peaking at the right time. I just would expect us to be a little sharper earlier.

“I thought last year, we did get better. We had a lot of unknowns, especially on our offensive line. The year before that, we did the same thing. We sputtered. I expect those kinds of things to pop their heads up again this year too, where we don’t get everything like we want it.”

James reiterated, “I love the way these guys have come and practiced, the way they came and worked out.”

August 17 in Bryant athletic history: 2018
‘Saltier Together’ is theme of revised 2020 Salt Bowl