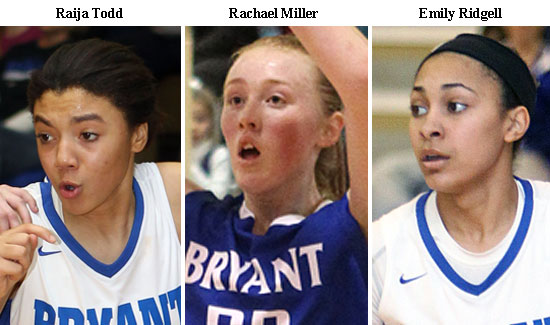 Sophomore guard Raija Todd who was among the top scorers in the 7A/6A-Central Conference, has been named all-State and all-State Tournament for the 2015-16 Bryant Lady Hornets basketball team. Todd and seniors Rachael Miller and Emily Ridgell were also named all-conference.

Miller, who has commited to continue her edcuation and basketball career at Southern Arkansas University in Magnolia, averaged 7.8 points and 5.2 rebounds per game. She shot 71 percent from the line.

Ridgell averaged 9.1 points and 5.1 rebounds per game for the Lady Hornets while shooting 72 percent from the free-throw line.

The Lady Hornets finished the season 11-16 overall but with seven losses by less than 6 points including two by 2 points, one by 3 and two by 4. For the second year in a row, they earned a win at the Class 7A State Tournament, beating Bentonville 53-48 before losing in the second round to eventual State champion North Little Rock.