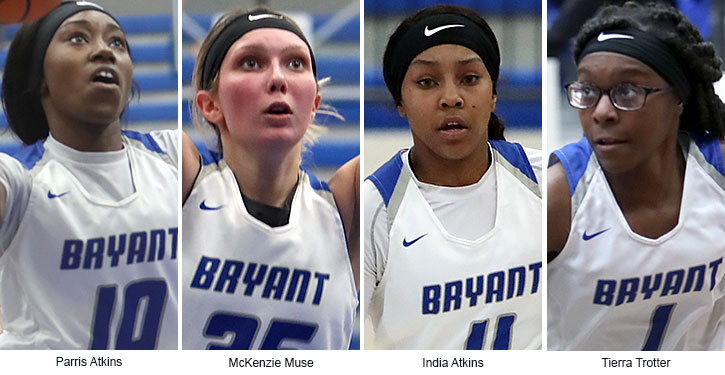 Senior point guard Tierra Trotter was named all-State for the second time in her Bryant Lady Hornets career and, along with seniors McKenzie Muse and India Atkins plus sophomore Parris Atkins, was named all-conference in the 6A-Central Conference for the 2019-20 season.

In addition, Trotter was named to the all-State Tournament team after scoring a career-high 31 points in the Lady Hornets tourney-opening win over Rogers.

The Lady Hornets finished the season with a 17-11 record.

Trotter was the team’s leading scorer on the season. She averaged 15.6 points per game along with 3.8 rebounds, 2.7 assists and 2.2 steals per game.

“Tierra got better and better as the season went along,” said Lady Hornets coach Brad Matthews. “Her play the last 8 to 10 games of the season was really impressive from an offensive standpoint. She was definitely playing her best basketball at the end of the year.”

“India played and competed at a high level versus some of the best teams and players in the state,” said Matthews. “Her competitive nature was impressive to watch this season.”

Muse scored 10.2 points per game and led the team in rebounding at 7.7 boards per game. She shot 35 percent from the 3-point line.

“McKenzie has been a rock for our team and program,” Matthews said. “She has been so reliable in every aspect of our team both on and off the floor. She has consistently produced offensively and defensively. She took her rebounding to another level this year while always playing great on the defensive end.”

Parris Atkins, who started most of the year as a sophomore, averaged 10.6 points and 3.9 rebounds per game.

“Parris had a great sophomore season,” said Matthews. “Her defense and ability to get out in transition made her a great threat each game.”