SHERIDAN — In game one of a Junior American Legion doubleheader at Oliver Williams Field on Tuesday, the Bryant Everett Buick-GMC Black Sox piled up 20 hits in a 15-6 win over the Sheridan Yellowjackets. In game two, the Sox’ Logan Allen and Noah Easterling combined on a one-hit shutout and the Sox broke open a 1-0 game with seven runs in the seventh for an 8-0 victory to sweep the twinbill.

Both teams basically played two squads. The first game featured mostly 16-year-olds. In the second, more 14- and 15-year-old players were on the field.

In the first game, Seth Tucker and Dylan Hurt each had four hits; Austin Kelly and Alex Shurtleff had three each; and Garrett Misenheimer cracked a pair. Aaron Orender, who started the game on the mound, drove in three runs at the plate.

All nine players in the starting lineup in the first game hit safely.

Orender pitched around a pair of errors in the first inning then gave up a run without surrendering a hit in the second.

In the meantime, the Sox were racking up nine runs. In the first, an infield hit by Misenheimer got a three-run uprising started. Hurt ripped a single to left and Kelly laced an RBI double to the gap in right-center. Orender cracked a single up the middle to drive in two.

In the second, Shurtleff led off with a base hit up the middle. Jeffrey Hastings came up and, after fouling off a bunt attempt, slapped a single through the right side on a perfect hit-and-run. Tucker’s first hit was an RBI single up the middle.

With runners at first and second, Bryant manager Darren Hurt went back to the bunt and Allen got down a good one. Sheridan pitcher Tyler Cleveland fielded it but his throw to first was wild so not only did Hastings and Tucker advance, Hastings scored and the Sox had runners at first and third with still no one out, leading 5-0.

Misenheimer singled in Hastings then Hurt doubled to chase in Tucker and Allen. With Misenheimer at third, Kelly picked up another RBI with a grounder to second for the first out of the frame. Orender followed with a bloop into shallow center that Sheridan shortstop Dalton Domrase chased down. But Hurt alertly tagged up on the play and raced home ahead of the throw to make it 9-0.

Sheridan, however, picked up its first run in the bottom of the inning then struck for five in the home third, stroking six hits. A pair of Bryant errors early in the frame aided the Yellowjackets. Nathan Kirkpatrick, Kamryn Alkire, Blake Moore and Cleveland each singled in a run.

Side-winding Boston Heil came on in relief for the Sox and struck out Logan Mitchell on a pitch in the dirt. It took a moment for Misenheimer, the Bryant catcher, to find the ball and Moore, the runner at third broke for the plate as Mitchell headed to first. Misenheimer pounced on the ball, saw there was no time to get Mitchell then noticed Moore headed his way and applied the tag to end the inning.

Heil would go on to face the minimum, striking out five over 3 1/3 innings to pick up the win. The only Sheridan base-runner came on a walk to lead off the bottom of the sixth. But the Sox ended the game with a doubleplay.

By then, they’d tacked on a run in the fifth and five in the sixth. The run in the fifth was scored by Shurtleff, who led off the inning with an infield hit, stole second, moved to third when Heil did a nice job of grounding out to the right side of the infield. Tucker singled in the run.

In the top of the sixth, Hurt and Kelly stroked singles and moved up on Orender’s bouncer to second. Cameron Coleman, who had hit the ball hard all night with nothing to show for it, hit a chopper this time that he beat out for an RBI single.

With two down, the Sox worked the hit-and-run again and Tucker came through with the single to right. Tucker stole second and when the throw from the catcher was errant, Shurtleff trotted home to make it 14-6. Allen put the finishing touches on the offensive outburst with an RBI single to center.

In the nightcap, the lone Sheridan hit came on a double with two out in the bottom of the first by Hunter Hicks, the Jackets’ starting pitcher. With a 2-2 count on Drew Austin, catcher Grayson Prince blocked a pitch in the dirt from Allen. Hicks tried to take third but Prince grabbed the ball and threw to Diego Vargas at third in time to nab Hicks and end the inning.

The Sox scored the only run of the first six innings without a hit. Preston Kyzer, who walked three times and doubled in the game, waited out the first free pass to lead off the top of the second. Scott Schmidt sacrificed him to second then a wild pitch allowed him to reach third. On a tough at-bat, Ethan Thompson saw nine pitches, fouling off three full-count deliveries from Hicks before pulling a grounder to first that got Kyzer home with the game’s first run.

Allen pitched a 1-2-3 home second but Hicks set the Sox down in order in the third as well. In the top of the fourth, Myers Buck broke up Hicks’ no-hitter with a sharp single to right. Buck would finish with two of Bryant’s five hits in the game.

But this time, he was caught stealing on a strike-em-out, throw-em-out doubleplay. Kyzer walked and Schmidt reached on an error but Hicks kept it 1-0.

Allen, pitching for the first time in a while, retired the first two in the bottom of the third but then lost his command, issuing consecutive walks to Ean Hicks, Austyn Wright and Montana Korte. With Hunter Hicks coming to the plate, manager Jimmy Parker brought in Easterling. And, on his first pitch, Hicks flew out to Thompson in right to end the threat.

Sheridan managed just two base-runners after that, both one walks. The first came in the fifth to Ruston Johnson. Hayden Finley tried to bunt him over only to pop it up. Alex Thompson, in at catcher for Prince, leapt up and caught the pop then rifled a throw to first to double off Johnson, taking the starch out of the inning.

The second walk came with one out in the bottom of the seventh, just moments after, Schmidt had robbed Drew Austin of a hit at second base. Easterling walked Dakota Smith but then got Max Nanneman to fly to Matt Sandidge in left. Johnson struck out to end the game.

The Sox were pretty much shackled by Hicks as well. He worked around one-out walks to Brandon Hoover and Kyzer in the sixth.

Bryant’s seventh-inning outburst began with C.J. Wallace reaching on an error. Sandidge got a sacrifice bunt down as the Sox were hoping to add at least one insurance run.

Wallace moved up on a wild pitch as Vargas drew a walk. Vargas swiped second but with two down, the Black Sox still hadn’t scored. That’s when Buck came through in the clutch, lashing his second hit to right. Wallace scored easily then Vargas rounded third and headed home. The relay to the plate was late and, to top it off, when Buck headed for second on the throw home, the catcher’s peg to second sailed into the outfield and evaded the center fielder. Buck circled the bases and suddenly the Sox had a 4-0 lead.

The inning revved up again when Hoover was hit by a pitch and Kyzer drilled a double down the right-field line. Hoover hustled home to add to the lead.

Schmidt followed with a bloop single to center and Thompson ripped a base hit to right center that chased in Kyzer. Schmidt sprinted to third and, on the late throw there, Thompson hustled into second. Both of them then scored to cap things off when Wallace’s grounder to short was misplayed.

The Junior Sox are scheduled to return to action on Monday, June 15, with a trip to Morrilton for a doubleheader. 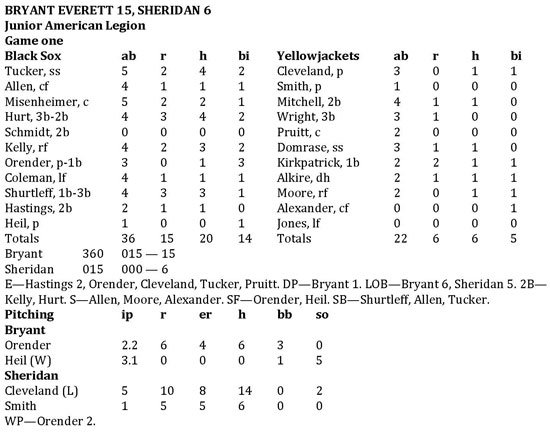 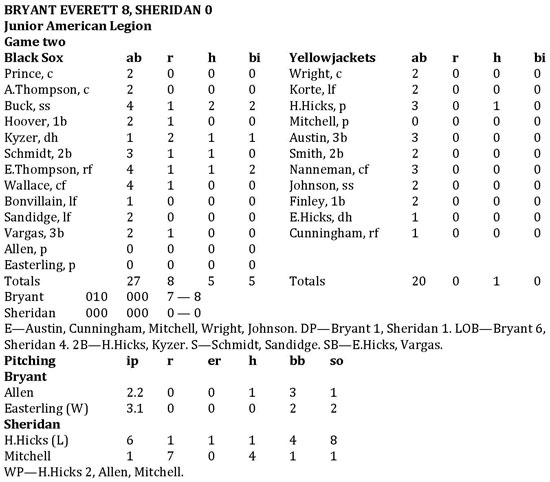 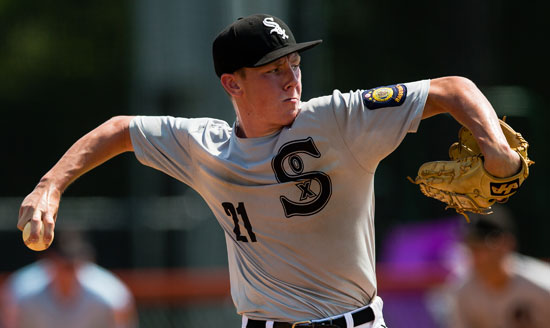