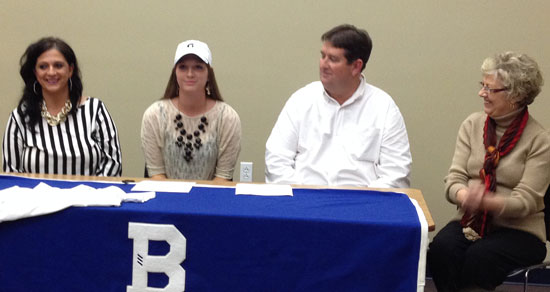 In golf, like most other sports, to truly appreciate how difficult it is, you really have to have played it. The odd thing is that even the most inexperienced duffer can come up with a great shot but it may be the only one out of who knows how many bad ones over an 18-hole round.

That’s what makes it so impressive when someone plays the game — not just well — but consistently well.

“What she did on 15 and 17, I have not seen,” he declared. “She made a wonderful 10-foot birdie putt on 15 then, on a very long par-3 into the wind and water everywhere — very intimidating — she hit it just off the green then knocked it in for a birdie. I couldn’t believe it. It was a wonderful display of her golfing ability.”

That display was just an example of the way she played in 2013 in the summer and the fall, earning her fourth straight all-State honor, finishing third at the Class 7A State championship and, by virtue of a dramatic three-hole playoff with Fayetteville’s Anna Grace Lavy and Rogers’ Brooke Matthews, won a spot in the State Overall which features the top three golfers from each of the seven classifications. She finished third there as well.

It’s no wonder that colleges were contacting her about continuing her golf career at their schools. And, on the occasion of Pickering’s glowing report, Weaver verified her choice of the University of Arkansas at Little Rock by signing a national letter of intent with the Lady Trojans.

“We’re so very proud of her,” Pickering stated.

Commented Bryant golf coach Keith Dale, “She’s worked real hard on her game. This last season, she took in a lot of tournaments. She just had a really good season for us and all throughout the summer. And her hard work and dedication is paying off for her. She’s going to a really good college golf program.”

Weaver moved to Bryant with her family before her sophomore year from Stuttgart where she was all-State as a freshman. She’s also a two-year starter on the Lady Hornets basketball team.

Last summer, she was named the 2013 Arkansas State Golf Association Player of the Year, was chosen to Arkansas’ entry in the ASGA tri-state Junior Cup, a victorious effort against teams from Mississippi and Louisiana. In 14 Junior events during the summer, she won four, finished second three times and was third twice.

“(Basketball) Coach (Brad) Matthews and my teammates have been so understanding when I’ve had to miss summer basketball activities for golf,” she said. “I truly love both sports and I really appreciate being able to play both. They knew that my future was in golf and that I play basketball for fun.”

She also acknowledged those who had helped her in the ASGA Junior Golf program.

“I feel very fortunate to have played my Junior golf in Arkansas. Both the ASGA and the AWGA do a wonderful job running their events.”

Weaver thanked her family, particularly her dad whom she said “taught me everything I know since I started playing golf and spent a lot of time with me. Without their love and support I wouldn’t be here today.

“I started playing when I was about 11 or so,” she related. “My dad played golf and my brother (Ross) played golf and my sister (Alex) was playing a little bit so I just tagged along and picked it up. My very first tournament, I shot 154 and today I shoot in the 70’s. It was just a process and I had to work at it. I played a lot. My life was golf during the summer.”

Asked about her game, Dale said, “It’s very technical. She’s a very good shot, accurate with her clubs and she doesn’t crack under pressure. She steps up to the game and really plays it well. Just like any other golfer, they can get out on the fairway and have problems but she doesn’t let those problems bring her down. That’s very helpful to her. That’s why her game plays so well. She doesn’t let a bad shot get her.”

Regarding the strength of her game, Weaver said, “Definitely driving the golf ball off the tee. And I can map the golf course pretty well. My dad’s taught me to do that. I just know where I need to go and where not to hit it.