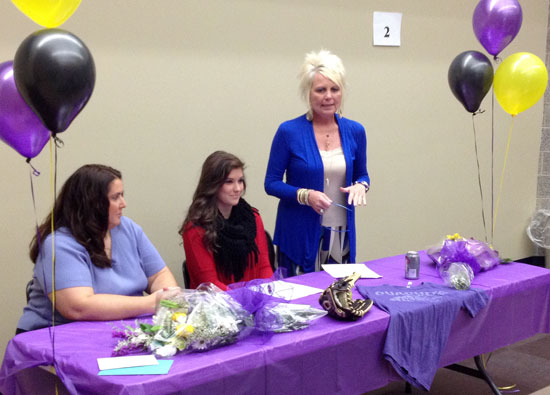 “If you can keep your head when all about you are losing theirs . . .”

Kayla Jolley showed last spring that she could handle pressure. She appeared to stay calm no matter what the situation during an often trying 2012 softball season.

“She developed an incredible game face,” acknowledged Bryant Lady Hornets coach Debbie Clark. “It was the kind of game face that a coach can’t teach. It’s something a player either has or doesn’t. Bases loaded, no outs, down 5-0 or up 2-0, you could not see it on her face.”

Jolley explained, “Before I go on the field, it’s all running through my mind. You have to relax because if you’re stressed about it then it won’t be good. If you relax, be calm, know what to do and not have to worry. You keep a straight face and nobody sees the emotion because if they see emotion then they freak out. So you have to be calm for yourself and everybody around you.”

And, on Wednesday, Nov. 13, that is, in fact, the player that McGhee and the OBU Lady Tigers got as Jolley, flanked by her mother Shelley, several other family members, teammates and friends, signed a national letter of intent to continue her education and softball career at the Arkadelphia college.

Jolley, recruited as a pitcher, also played right field for the Lady Hornets in 2012. In the circle, she walked 12 and struck out 42. She earned all-conference honors and was chosen to play in the Junior Classic. She hit .350 with an on-base percentage of .443 and a slugging percentage of .433. In 60 at bats, she had a home run, 10 RBIs and scored 11 runs.

Signing before her senior season, she admitted, was a relief.

“It means a bunch because I’ve worked so hard for it,” Jolley said. “I put so much time and effort into it. It’s like a weight has been lifted off my shoulders.”

She chose OBU over UCA and Henderson State, who expressed interest. “When I went to OBU, I just fell in love with it. It felt like a home away from home. It’s truly relaxing. The environment was so calm and people were so nice there.”

Jolley has served as a student athletic trainer with head trainer Christa Finney for the football team this fall. She plans to major in Kinesiology.

That plays into what Clark said was Jolley’s legacy at Bryant, beyond her calm demeanor on the field.

“Kayla’s freshman and sophomore years helped her grow and mature into an incredible leader as a junior,” Clark declared. “That’s what’s so important about today.

“When Kayla was a freshman and a sophomore, she was behind a group of players that we called the ‘The Beasts’ that led us to three State championships,” the coach continued. “Kayla understood what her role on the team was, to make her teammates better. And in return, she was going to get better.

“She knew that one day she was going to get the call to come out of right field or come off that bench,” Clark related. “She didn’t like being on the bench but she knew that her junior year her time was going to come, because they were going to graduate.

“She could’ve decided, ‘You know, Coach is probably going to have to play me. She lost all these seniors. She’s probably going to have to play me. I can just eat, drink and be merry all summer. Or I could work out.’ And work out she did. She came back to the softball field not only physically ready but mentally ready. She went from having to sit — because that happens — to this, because she wanted it and she worked. She used her energy to become a better player instead of a bitter player. She understood her time would come and her time came.

Jolley expects improvement all around for the Lady Hornets next spring.

“I think we’re going to be good this year,” she declared. “We have more players and we’re more developed. I’m really excited about it.”