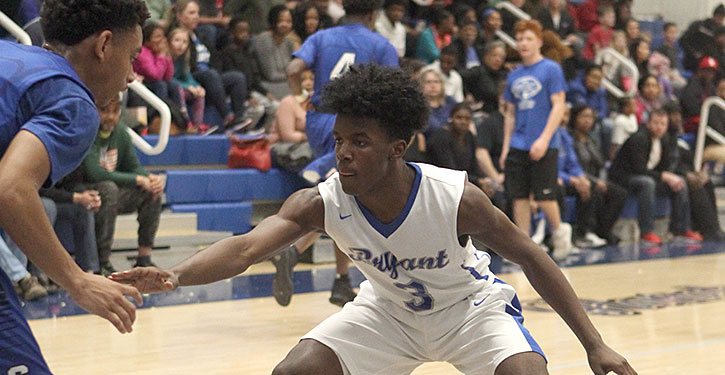 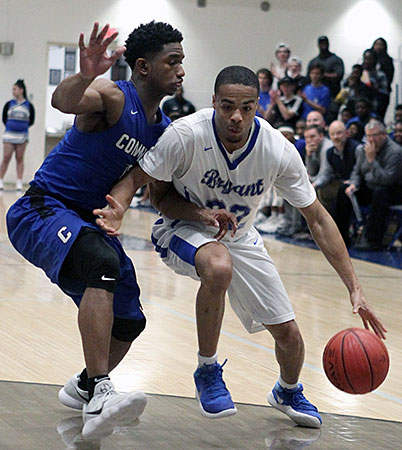 Deron Canada tries to drive the key around a Conway defender. (Photo by Rick Nation)

After trailing by 13 points late in the first half to a hot-shooting Conway Wampus Cats team, the Bryant Hornets, once again, showed the heart that has them headed to the Class 7A State Tournament. They came all the way back and, on a pair of free throws by senior Sam Chumley with 4:47 left to play, took a 47-46 lead.

Just moments before, Chumley had hit a 3 to cut the Conway lead to 1. But that basket with 5:09 left in the game proved to be Bryant’s last field goal.

Still, they stayed close with free throws by Camren Hunter and Khalen Robinson. Hunter, the Hornets’ freshman point guard, played one of his best games of the season with 14 points and eight rebounds. With 2:34 to go, the Hornets trailed just 51-50.

After a timeout by Conway coach Brian “Salty” Longing with 2:20 remaining, the Wampus Cats worked the clock down under two minutes. They missed a shot, but sophomore Caleb London got the offensive rebound and scored to make it 53-50 with 1:46 to go.

London led the Cats with 17 points.

The lid, however, was on the basket for Bryant. On Senior Night, Chumley got a look at a 3 but it refused to fall. The Hornets, in turn, trapped Kylen Milton at the sideline and Conway took another timeout with 1:18 left.

When play resumed, London appeared to have an open lane to a layup only to have Robinson fly in and block it from behind. 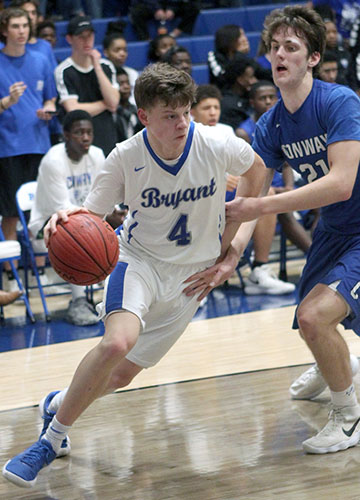 Sam Chumley gets up the baseline around Conway’s Blake Bradshaw. (Photo by Rick Nation)

Moments later, Robinson drove to the hoop but was denied. With :45.1 left, Bryant head coach Mike Abrahamson called a timeout as Conway’s Jakilyn Kaiser was fouled. And when Kaiser missed the front end, the Hornets had another shot at tying the game.

This time, senior Deron Canada got an open look at a 3 from the corner and it too rattled out. Rodney Lambert made a steal to give the Hornets yet another chance. Chumley drove to the rack and couldn’t get his shot to go. Despite contact, no foul was called.

With :10.9 left, London was fouled but he also missed the front end. Robinson rushed the ball up the floor and drove the left of the key, drawing the defense. As he released a pass outside to Lambert who appeared to be open for a 3, Robinson was knocked to the ground with a fore-arm across the chest. The pass veered off too far away from Lambert. No foul was called and, with :04.1 left, Conway’s Christian Williams converted two free throws to sew up a 55-50 win, a most frustrating loss for the Hornets.

“I thought we got good looks all night long,” Abrahamson said. “Now, Conway’s a really tough team. They’re big and physical and I want to give some credit to their defense for those shots not going down. We just couldn’t score the ball very well. I don’t know how we got to 50 to be honest.

“We just don’t have a lot of margin for error this year,” he stated. “It is what it is. But they played really hard and fought back. We even took the lead.

The two teams came into the contest tied for third place in the 7A-Central Conference. Conway earns the No. 3 seed from the Central for next week’s 7A State Tournament in North Little Rock while Bryant will be the 4 seed and will open the tournament on Wednesday at 2:30 p.m., against the Springdale Bulldogs, the 5 seed from the West.

“If we can take that into the State tournament and try to improve just a little bit in a lot of areas,” he said. “If every one of them takes a few small steps in the right direction, maybe in a couple of areas, together, collectively, we can cover great distances and make our team a lot better. And that’s all we’ve got left, looking ahead. So, we’re going to keep trying.”

“I think the world of Conway. They’re tough and a really good team. Somebody from our conference other than the favorites can go in there (to State) and go on a run.”

Earlier in the season, the Hornets had won at Conway, 62-59. In that game, the Cats struggled to hit 3’s but, on Friday, they hit 7 of 13 from beyond the arc in the first half as they overcame Bryant’s initial 9-1 blitz. A 13-2 run in the second quarter produced that 13-point advantage. Two free throws by Lambert, a steal by Hunter and a 3 by Lambert cut the margin to 32-24 at the break.

Lambert would finish with 11 points for the Hornets, Chumley and Canada had 9 each and Robinson 7.

Conway’s bench proved decisive. While Bryant’s bench is thin, mostly sophomores, who have started to play better and better, Conway has veterans coming off the bench. A trio of reserves accounted for 25 points and 13 rebounds.

But Conway’s 3-point bombs stopped falling in the second half. They were 0 for 5 then just stopped shooting them.

Asked about a change in the defense at the half, Abrahamson said, “Not really changed, just tried to do better at what we were wanting to do in the first half. The first time we played them, they went something like 1 for 18 from 3. And that’s not even something that we talked about. They certainly did shoot the ball better, but I didn’t think we were closing out with the purpose to actually stop them. We were just kind of closing out to be there in the first half. We addressed that at halftime and I thought our guys did a better job of that in the second half.

“I thought, throughout the game, it was a rebounding deal,” the coach noted. “Defensively, we couldn’t finish possessions and get rebounds. But we did do better defensively in the second half. We talked about doing five or six things just a little bit better and the only one we really didn’t do better was rebounding.”

Indeed, the Wampus Cats out-rebounded Bryant 39-29 in the game with Terry Clardy finishing with 11.

Scott Ashby scored the first basket of the second half and, after a Lambert free throw, Kaiser scored inside to make it 36-25. That’s when the Hornets started to gather some momentum. Lambert knocked down two free throws and, after combining with Robinson on a steal, picked up 2 points on a goal-tending call. Canada found the range for a 3 and the lead was down to 36-32 with 4:45 to go in the third.

London got a dunk, but Hunter answered with a 3 that trimmed the lead to 38-35.

Lerome Thompson, who scored 11 points off the bench, hit a shot to finish the quarter then opened the fourth with another to make it 42-35. But Chumley nailed a 3. Kylen Milton scored and was fouled for Conway but missed his chance for a three-point play so when Hunter hit another trey, it was a 4-point game again.

Milton added a bucket inside but a big rebound basket by Hunter gave the Hornets a lift. He was fouled on the play only to miss the free throw. But Robinson went high for the offensive rebound, got it back to Chumley and he drilled the 3 that cut it to 1.

Conway missed and Chumley was fouled on the rebound, giving him the chance to put the Hornets ahead. And when K.J. Merriweather took a charge while guarding Thompson, it looked like Bryant might be ready to get a run going.

Free throws by Clardy tied it back up before London put the Cats ahead to stay with 3:27 to go.

Bryant’s early lead was the result of a pair of 3’s by Canada wrapped around a triple by Robinson.

But 3’s by Thompson, London and Williams helped Conway surge into the lead by the end of the quarter.