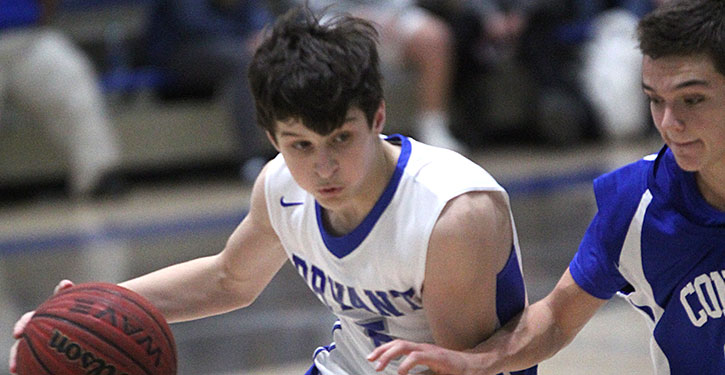 Wampus Cats hit buzzer-beater to get to OT, then win over freshman Hornets 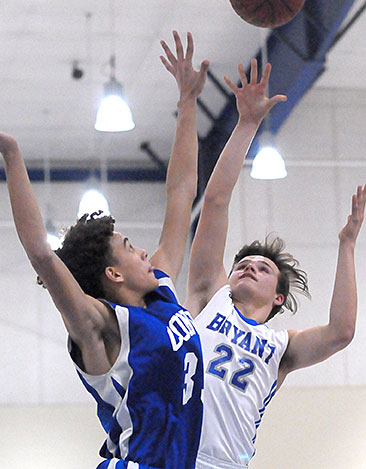 Austin Ledbetter gets a shot away over a Conway White defender. (Photo by Kevin Nagle)

The Bryant Hornets freshman team was in position to knock off the Conway White Wampus Cats Thursday night in the regular-season finale for both teams at the Bryant Middle School gym. Much like the Hornets had the Conway Blue Wampus Cats down late at Conway on Jan. 25.

Against Conway Blue, they couldn’t get a break in the late going and wound up falling to a Wampus Cat comeback 52-49. On Thursday, they led late and hand chances to add to a 5-point lead then, in the final 40 seconds, to a 3-point lead. But missed opportunities cost them and, with a last-second 3-pointer, the White Cats tied it at 38. And, in overtime, the Hornets just couldn’t get a field-goal attempt through the net and Conway White extracted a 44-40 win with a 3 by the same play that tied it, snapping a 40-40 tie in the extra period.

Though it was another in a line of rugged defeats for Bryant (by 4 in OT to White, by 2 to Russellville, by 3 to Blue), there is a silver lining for the Hornets, who will now host the Central Arkansas Junior High Conference post-season tournament starting Monday. 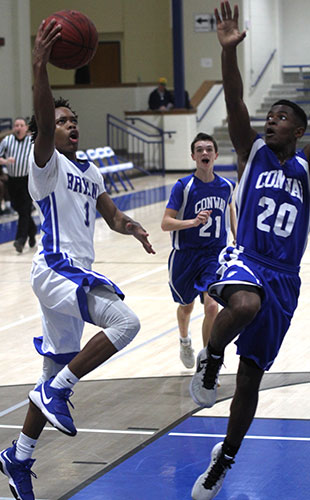 As a sixth seed, the Hornets wind up on the side of the tourney brackets away from all the teams they’ve struggled with, including the regular-season champion North Little Rock Charging Wildcats.

They’ll open the tournament at 7 p.m., on Monday against Conway Blue. If they can pull the upset, they’d play the winner of the Conway White-Cabot South game. The recent narrow defeats to the Conway teams and a season sweep of Cabot South, give the Hornets a chance to make a run at the championship game.

In addition to being on the other side of the bracket from North Little Rock, they’ll be opposite Russellville and Lake Hamilton, two teams who swept the season series over the Hornets.

So, Bryant has a lot to look forward to, helping them get over Thursday’s heartbreak.

The game was tight throughout with eight ties along the way including 14-14 at the half and 25-25 going into the fourth quarter.

In fact, the largest lead of the game for either team was the 36-29 advantage that Bryant enjoyed late in the game. A three-point play kept Conway White alive then a pull-up jumper by Austin Ledbetter with 1:56 left in the game, made it 38-32.

And the Hornets had a chance to extend that further but turned the ball over.

Conway hit a 3 to make it a one-possession game with :59 left.

The Hornets attacked the offensive boards on the subsequent possession but couldn’t score to make it a two-possession game again. But, Gavin Brunson was fouled grabbing the carom off a Conway White miss and went to the line with :38.7 on the clock.

The front end of the one-and-one opportunity just would not go down, however. Still, Conway White had another 3 rim out. Jalen Montgomery pushed the ball up the floor against the Cats’ press but was fouled with :20.1 showing.

Unfortunately, his first shot came off the rim leaving it 38-35.

The Hornets forced a turnover but, with just under 10 seconds left, they turned it back over to the Cats, who called a timeout with :08.1 showing.

That’s when they set up the play to get the tying 3.

In the overtime, two free throws put Conway White ahead 40-38. It was the Cats’ first lead since 25-23 in the final minute of the third quarter.

Ledbetter tied it back up by knocking down both ends of a one-and-one with 1:46 left in the extra period. Twenty seconds later, another 3 found the bottom of the net and Conway White had the lead to stay. 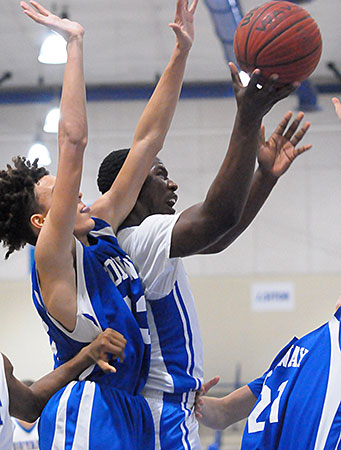 Myles Aldridge gets an elbow to the side of the head as he tries to score inside. (Photo by Kevin Nagle)

An offensive foul cost the Hornets a chance to tie or cut the lead to 1. But, after a timeout, Conway White suffered a turnover. The Hornets worked the ball to 3-point marvel Aiden Adams, who had hit a game-winning shot against the Cats early in the season, but his 3-point try came out.

Conway White clinched the No. 2 seed to the CAJHC tournament with a 14-3 mark against the conference.

Bryant led Thursday’s game most of the first quarter as Ledbetter scored 5 of his team-high 14 points. Conway White pushed ahead 8-7 but two free throws by Adams gave Bryant a one-point margin going into the second period.

Austin Schroeder canned an 18-footer to start the second-quarter scoring and putting the Hornets back on top. After a free throw by the Cats, Myles Aldridge hit one for Bryant and, later, Hayden Schrader rebounded a teammate’s miss and scored to make it 14-9. 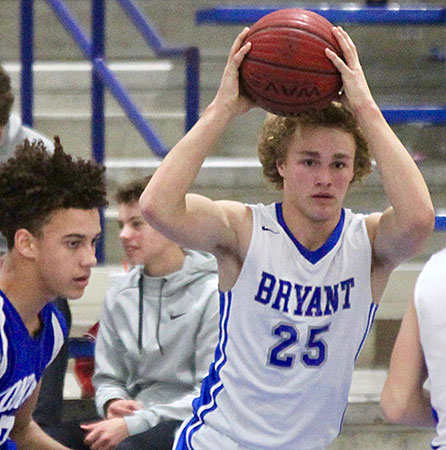 Conway White finished the half, however, with a 5-0 run to draw even at intermission. Shades of things to come, they hit an 18-footer to tie it at the buzzer.

The teams traded baskets to start the second half before Conway White managed a 23-18 lead by the 2:22 mark. Aldridge started the Hornets’ rally with a 15-footer then Brunson’s three-point play knotted it once more.

Conway White scored but, with :14 left, Schroeder scored from short range and it was knotted again.

Bryant pushed to the lead after Brunson scored and Conway countered with two free throws. Schroeder drained a 3 with 4:42 to go and the Hornets were ahead until the game-tying 3 at the buzzer ending regulation.

Conway cut it to 30-29 but Aldridge hit a pair from the charity stripe and Schroeder made a steal that got him to the free-throw line. He made one shot to make it a 4-point lead.

Conway White missed two chances at the line with 2:37 to go and Ledbetter made them pay with a 3 that bumped the margin to its apex, 32-29.

Along with Ledbetter’s 14, Bryant got 8 points from Schroeder, 6 from Schrader and 5 each by Brunson and Aldridge.