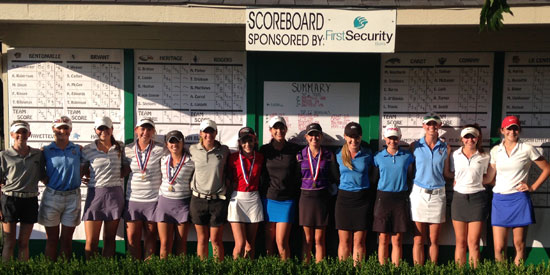 ROGERS — Peyton Weaver and Savanna Cathey both earned all-State honors with their play at the Class 7A State golf tournament at Lost Springs Golf Club, which concluded on Wednesday.

Weaver, with her third-place finish individually, earned a spot at the Overall State tournament, which brings together the top players from each classification, on Oct. 17, at Pleasant Valley Country Club in Little Rock.

Cathey was 12th individually to help the Lady Hornets finish fifth in the team standings with a score of 517 over the 36-hole tourney. First-day leader Fayetteville took top honors at 488, followed by Fort Smith Southside (498), Rogers (498) and Bentonville (509). Mount St. Mary of Little Rock was sixth at 522.

Weaver followed up her first-day round of 80 with a 77 on Wednesday for a 157 for the tournament. Taylor Loeb of Mount St. Mary was the individual medalist at 147, turning in a round of 70 on Wednesday. Cabot’s Marlena Weatherly was second at 150.

Cathey, who finsiehd with an 87 on the first day, fired a 79 on Wednesday to finish at 166. Abigail McGee completed the Lady Hornets scoring trio with a 194. In addition, Tiffany Robinson finished at 236 and Katy Edwards at 263.