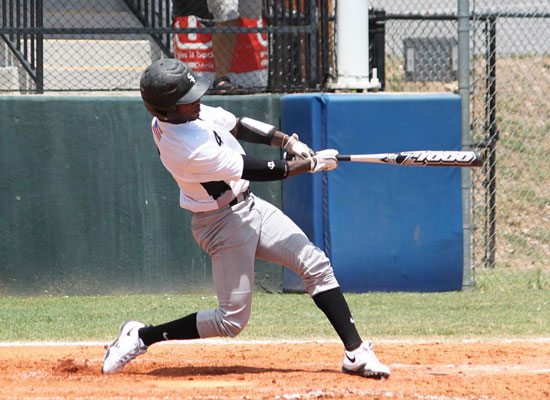 NORTH LITTLE ROCK — Marcus Wilson was bent over, hands on knees, at third base. He was trying to[more] catch his breath and, apparently tending to an ankle, after this lead-off double in the ninth inning of the Bryant Black Sox’ opener at the Senior American Legion State Tournament on Friday. 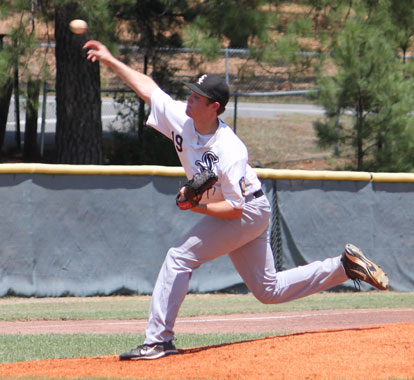 Wilson had just evaded a pickoff throw at second by Rogers right-hander Reed Brown and, moments later, had rolled into third when Hunter Mayall lashed a liner to left for his fourth hit of the game.

A surprise starter in center for the Sox, Wilson, who came into the game having hit in 11 of the last 13 games he’s played in, was a busy guy. Out of the eight hole in the line-up he’d doubled twice, blasted a three-run homer — his first of the season — and scored four times.

He would make it four when, after getting the blow at third, he sprinted home on a suicide squeeze play, executed by Tyler Brown. That gave Bryant an extra run that supplied some comfort when Rogers tried to rally in the bottom of the inning only to stopped cold by right-hander Tryce Schalchlin with the bases loaded.

Bryant’s 11-7 win was the result. Now 29-5, the Sox will play the winner of the North Little Rock-Blytheville game at around 8 p.m., on Saturday.

“When we starter (Nate) Rutherford, he’s typically not in the lineup,” acknowledged Bryant manager Darren Hurt, regarding Wilson. “But he’d been swinging it pretty well in District, so we decided to put him out there today and, man, he came up huge for us.”

Regarding the ninth inning, Hurt added, “He was winded and we faked an ankle injury to get a little time.”

Hayden “Petey” Daniel came in defensively for Wilson in the bottom of the ninth and made nice running catch in the right-center gap in support of Schalchlin, who came in to get out of a five-run second and wound up allowing just one run the rest of the game, though he did run into trouble in the ninth.

“I started to put Hayden (Daniel) in there to run for Wilson but we wanted, if (shortstop Jordan Taylor) went to the mound, to have ‘Petey’ go to center and move Marcus over (to left). But when I got back in (the dugout), Marcus looked like he’d been run over by a truck so I said, ‘Well, we’ll go ahead and change it now.’ 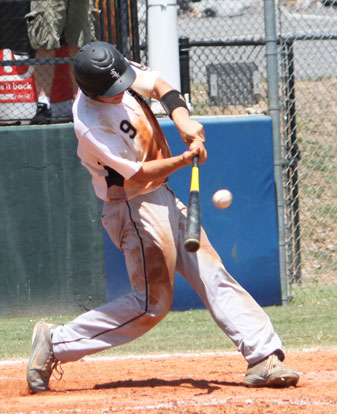 “Everybody was on him about being out of breath,” Hurt mentioned with a chuckle, “and he said, ‘I didn’t expect to have this many hits today.’"

The two teams scored 13 runs in the first three innings. A four-run top of the third had the Sox up 7-6 and it looked like a slugfest was in store. But Rogers reliever Zach Stewart and Schalchlin changed the game.

“The second pitchers for both teams calmed things down and it turned into a completely opposite game, just trying to scratch out a run where we could and them the same way,” Hurt acknowledged. “Shack’s been doing it. I mean, we never start him and we bring him in spots just like that where we need someone for long relief and he goes in there and gets the job done. I don’t know how many times he’s done it this year but it’s several and he did another heck of a job today.”

The Sox extended the lead with three runs in the top of the seventh to knock out Stewart. Rogers trimmed a run off the margin in the bottom of the inning. In the bottom of the ninth, Stewart led off for Rogers with a single to right. After Daniel retired Tyler Greenhaw on the fly to right-center, Reed Brown singled to left.

Hurt came out for a talk with his pitcher at that point. But, on a 3-2 pitch, the next batter, Zach Sample, drew a walk that loaded the bases and brought up the potential tying run.

But the right-hander got an endorsement from his catcher Hayden Lessenberry that changed the manager’s mind.

“I told Less to go talk to him and when Less went back, he gave me the thumbs up that he was good,” Hurt related.

The next batter, Orin Orlopp hit a high pop wide of third that Bryant first baseman Landon Pickett nearly climbed the fence and hauled in but he couldn’t hold on. Schalchlin, however, fanned Orlopp. That brought up Jacob Kent who had two hits in the game. The count went to 3-0 but Schalchlin came all the way back to strike him out looking to end the game. 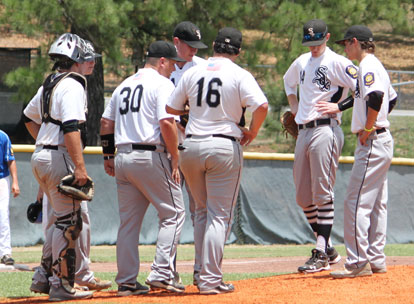 Over 7 2/3 innings, Schalchlin scattered six hits, walked just two and the last two punch-outs gave him four in the game.

Along with Mayall’s four hits and Wilson’s three, Pickett, Lessenberry, Josh Pultro and Ozzie Hurt had two each for the Sox. It was the 13th time this season, Bryant has scored in double-digits and the third time in the last five games. (The other two, they scored nine.)

Pickett got the Sox on the board initially. Taylor had walked with two down in the top of the first then the big first baseman drove a liner down the right-field line for a triple and his 53rd RBI in the team's 34 games.

Rogers tied it in the bottom of the inning with a two-out double by Greenhaw and a single to center by Reed Brown.

Pultro doubled to start the second. Lessenberry singled up the middle but Pultro held at third. Wilson followed with a bunt but Pultro got a late start from third and was tagged out on a bang-bang play at the plate. 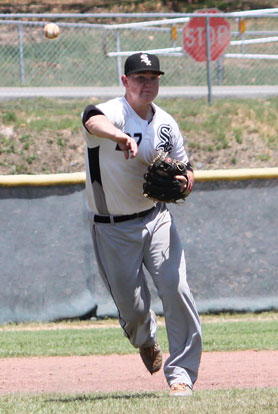 The Sox continued their small ball, however, to good effect. Ozzie Hurt got a bunt down and when pitcher Christopher Greer mishandled then threw wildly to first, Lessenberry sprinted home and the Sox wound up with runners at second and third for the top of the order. Mayall singled in Wilson and it was 3-1.

Rutherford struck out the first batter in the bottom of the second but a two-strike single by Kent, a walk to Camdon Myers and a hit batsman loaded the bases for the top of the Rogers lineup. Collin Roberts singled in two and, when the ball was mishandled in center, he wound up at second with Austin Griffin at third. Stewart’s single up the middle made it 4-3 and, after a walk to Greenhaw loaded the bags, Schalchlin was called on to relieve. Though a run scored on a passed ball and another came in on groundout by Reed Brown, Schalchlin struck out Zach Sample to end the inning with Bryant’s deficit at 6-3.

That hole was filled in quickly by the Sox in the top of the third with Wilson’s jack the trump card. Pickett scorched a double to left-center and, after Tyler Nelson sacrificed him to third, Pultro singled him in. Lessenberry’s second hit set the stage for Wilson’s blast on a 1-0 delivery.

Suddenly, Bryant was back up 7-6 and Stewart was coming in to relieve Greer. Despite an error that allowed Hurt to reach and a single by Mayall, Stewart got out of the inning with a doubleplay on a hard-hit ball to third by Tyler Brown. Myers juggled the ball at third but got to the bag in time then just nipped Brown at first.

And that was the last of the scoring for a while. Schalchlin, including the first two he faced in the second, set down 14 of the next 16 Rogers batters. He worked around a one-out walk in the fourth and an infield hit by Reed Brown in the fifth, starting an inning-ending doubleplay.

Stewart was just as stingy, though he needed a spectacular defensive play in the fourth to escape damage. With two down, he walked Nelson. Pultro followed with a shot to right-center that appeared to be bound for the fence. But Roberts made a sprawling catch to rob him and keep it 7-6.

In fact, Bryant didn’t manage another hit until Nelson led off the seventh with a bang up the middle. He stole second but Stewart retired the next two batters. That brought up Wilson again and, on a 2-1 count, he came through in the clutch with a drive to right center that Roberts couldn’t track down. The double scored Nelson and started a three-run rally.

Hurt beat out an infield hit and Mayall bounced one up the middle for his three single, driving in Wilson. Tyler Brown was struck by a pitch then Stewart, out of gas, issued a walk to Jordan Taylor, forcing in the run that made it 10-6.

Rogers got a run back in the home half when Stewart doubled and, with two down, Sample singled him home. But Schalchlin kept it to that, getting Orlopp to bounce to Taylor at short to end the inning.

The Bryant hurler worked around a lead-off single to Kent in the eighth, setting up the nail-biting ninth.