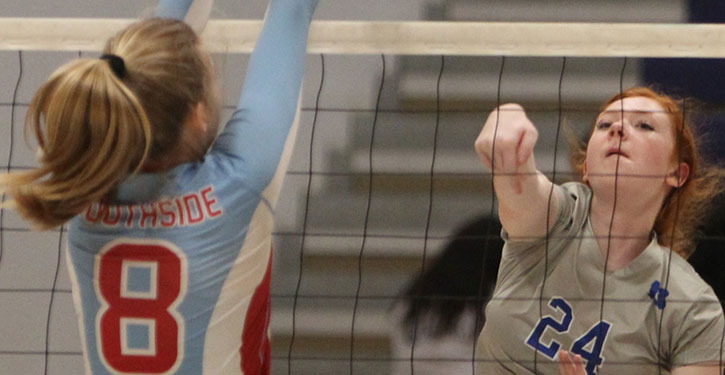 CABOT — In an epic set that may have season-long ramifications, the Bryant Lady Hornets volleyball team outlasted the Cabot Lady Panthers, 31-29. The game proved pivotal to the Lady Hornets on Thursday night after they’d dropped the opening set, 20-25, in the 7A-Central Conference match.

“It was an amazing night,” declared Lady Hornets coach Beth Solomon. “The girls played so hard. I’m very proud of how they played tonight. They were selfless and played smart.

“It took us a little bit to get going in game one,” she noted. “We started fighting back. The score was 13-23 and we got it back up but couldn’t pull it out.

“Game two went back and forth, back and forth at the end,” the coach continued. “We ended up pulling it out 31-29. That was the game shifter. We used that momentum. We overcame some adversity and it got the girls fired up then we took care of games three and four pretty quickly.”

Raven Loveless produced 18 kills with a solo block. She also had a service ace. Faith Stone added 11 kills and a block while Kristen Boyle came through with nine kills and three solo blocks.

The Lady Hornets served for 11 aces and got in 95 of their 98 serves. Brown had three aces and Baker two. Dabbs, Thompson, Loveless, Lee and Macey Loudon each had one.

Kennedy Kuchinski paced Bryant on the attack with four kills. Welch, Brooke Abney and Grace Camferdam had three each, Hernandez two while Imanii Jones and Beard added one apiece.