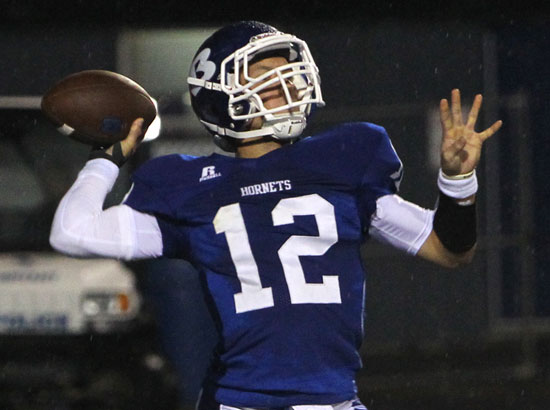 With their 49-13 win over the Lake Hamilton Wolves on Friday night, the Bryant Hornets clinched a home game in the 2013 Class 7A State playoffs, which start Friday, Nov. 15. It also kept them in the race for as high as a No. 2 seed, pending a victory this Friday against the El Dorado Wildcats. Bryant could also be a No. 3 seed.

Bryant is tied with El Dorado for the lead in the South. Both have 5-1 marks in the league. The Wildcats will be vying to hang onto the top seed from the South this Friday as well as an outright conference title.

If the Hornets win on Friday, they’ll earn the outright league crown and, with it, 10 points toward the ratings points that determine their seeding among the West teams (none of which they actually play during the year).

Those 10 points could help vault the Hornets into the No. 2 seed. Currently, Bryant trails Fayetteville in the Points standings by 3 points (see below). If the Hornets win on Friday, they’ll not only add the points for earning the conference crown, they’ll added 5 points for each of El Dorado’s league victories, plus as many as 10 points for their margin of victory over the Wildcats.

Fayetteville plays West-leading Bentonville on Friday and, with a loss, wouldn’t add to its point total leaving the avenue clear for the Hornets to surge into second. If Fayetteville wins, the Bulldogs will likely jump to the top seed with Bentonville slipping to two. Bryant would be third.

Should Bryant lose to El Dorado, the Hornets would either remain third or fall to fourth, pending the outcome of the Springdale Har-Ber game against Springdale on Friday. Fifth-place Rogers trails by too much to move past Bryant.

The advantage of earning a No. 2 seed is a bye in the first round of the playoffs. The Hornets would be idle on Nov. 15, then they’d host a game on Friday, Nov. 22, against the winner of a first-round game between West 3 (Fayetteville?) and Central 6 (likely Catholic or Little Rock Central).

As a No. 3 seed, the Hornets would open the playoffs at home on Friday, Nov. 15, against the sixth-seeded team from the Central (a likely rematch with Central or Catholic). A second-round game would pit them against Fayetteville or Bentonville on the road.

If the Hornets fall to a No. 4 seed, they’ll open at home against the No. 5 seed from the Central, which will probably be Catholic or Central, as well (Southside is still a possibility), with a second-round trip to play top-ranked Cabot.

Needless to say, though the Bryant is set to open the playoffs at home, there’s still a lot riding on their Senior Night contest with El Dorado.

All games kickoff at 7 p.m.

WHERE THE POINTS COME FROM

Using Bryant (60 points) as an example:

*50 points for its five conference wins by 10 points or more;

*10 points from the total conference wins (so far) of each of its opponents in those wins (Benton 3, Sheridan 1, Texarkana 2, Lake Hamilton 4).

*Teams also earn a point for each Class 7A conference team they have defeated but since there are no other 7A teams in the South Conference, those are points unavailable to Bryant.

*They could also receive 10 points for winning the conference championship. Those will be awarded to them if they defeat El Dorado this Friday night.