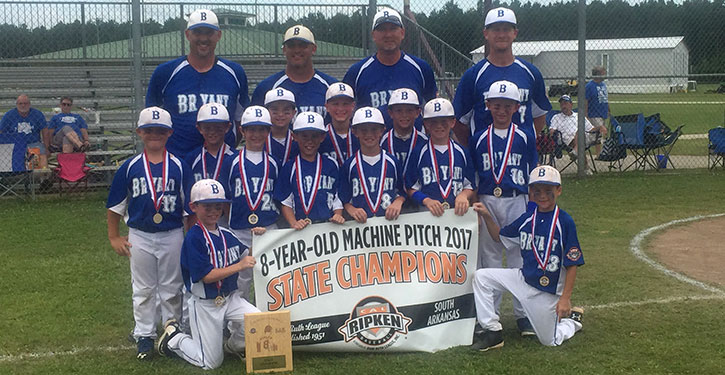 With 7-0 win over Hamburg, Bryant 8’s nail down State crown

SHERWOOD — The Bryant Athletic Association All-Stars played splendid defense while piling up 15 hits on the way to a 7-0 victory over the Hamburg All-Stars for the championship of the Cal Ripken State Tournament today.

The team advanced to Regional Tournament play at Spanish Fort. Ala., starting July 13.

Tate-Lee went 3 for 3 in the game, scoring twice. Markham, Dozier, Frazier and Rauth each had two hits with Frazier driving in three runs.

Bryant got all the runs they would need as it turned out with a two-run second. Dozier opened the inning with a single and Tate-Lee cracked a double to left. With one out, Frazier picked up his first RBI with a sacrifice fly. Chalmers followed with a double to make it 2-0.

Hamburg, which had two of its five hits in a scoreless first, added a bunt single in the second only to have Bryant retire the next three batters.

In the top of the third, Rauth beat out a bunt single with one out. With two down, Riggs ripped a double to center, chasing Rauth home. And when Markham tripled, it was 4-0.

A two-out single was all Hamburg could muster in the bottom of the inning. In the home fourth, Bryant set down the side in order.

Lucas started the Bryant fifth with a triple. He scored on a single by Pringle to make it 5-0.

In the bottom of the fifth, Hamburg was once again retired 1-2-3.

Bryant put the finishing touch on the victory when Dozier singled, Tate-Lee doubled and, with two down, Frazier drilled a double putting the game out of reach.