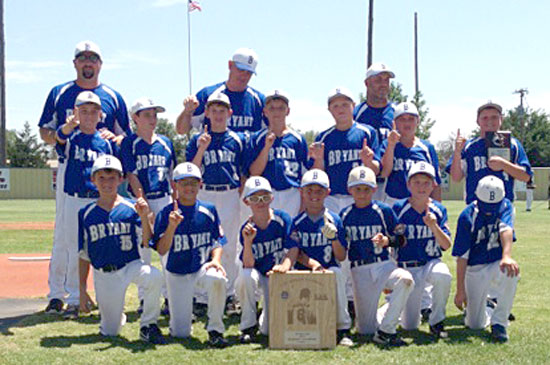 PAMPA, Texas — The Bryant 10-year-old All-Stars are headed to the Cal Ripken 10-and-under[more] World Series in Ocala, Fla., starting Aug. 10, after defeating Mountain Home, 4-3, in the championship round today.

Bates, with sixth-inning relief from Turner, made Bryant’s four-run second hold up for the victory in the title game. He allowed three runs on four hits, walked two and struck out two.

In the sixth, Turner surrendered a walk and the runner stole his way to third. After a strikeout, another walk put the potential winning run on base. But the Bryant hurler ended it with two more strikeouts, the last on a called third strike, igniting the Bryant celebration.

Bryant’s tale-tell second began with a walk to Riggs. Hathcote was hit by a pitch then a passed ball moved the runners up to second and third as Adams drew a free pass to load the bases.

After a pitching change, Curtis walked to force in Riggs. With one out, Schroeder then came through with the big hit, a two-run double to right. McDonald followed with a single to drive in Curtis to make it 4-0.

Bryant had threatened to add on in the top of the third when Sears singled, took second on Riggs’ sacrifice then advanced to third. Hathcote walked and with Gregory in to run for him, Bryant tried to steal a run with Gregory taking off from first and drawing a throw as Sears broke to the plate. But the Mountain Home shortstop made a quick return throw to the catcher in time for the tag on Sears.

In the top of the fourth, Curtis cracked a single to right and, after Schroeder walked, a passed ball allowed them to move up to second and third. They had to hold, however, as McDonald hit a little bloop into no man’s land on the infield that allowed him to reach safely. So the bases were loaded with one out but Mountain Home got out of the jam.

Bates worked a 1-2-3 fourth but, in the fifth, a singled, a groundout and a two-out double made it 4-3. But, with the potential tying run at second, he got the final out on a bouncer to Schroeder at short.