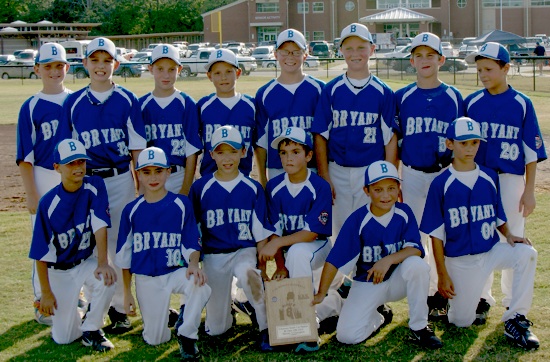 The Bryant 10-year-old Al-Stars finished off their run through the district tournament, taking[more] the championship game in a rematch with Benton by a score of 11-0 at Bishop Park on Sunday, June 26. 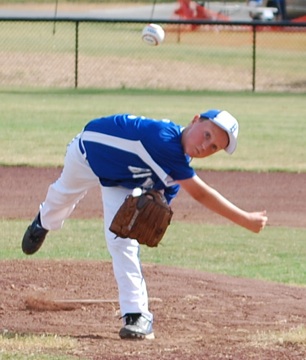 McEntire was the starting pitcher for Bryant and hurled all four innings, scattering five hits while striking out four, and was backed by a couple of fine plays by his defense to perserve the shutout. At the plate, Shepard was 2 for 3 with a bases-loaded triple and two runs scored.

After stranding runners at second and third in the first inning after a McFarland double, Bryant pushed across a single run in the second. With two outs, Shepard laced a solid single to center and Coppock and Mullings followed with walks to load the bases. Bariola’s grounder back up the middle scored Shepard to give Bryant a 1-0 lead. 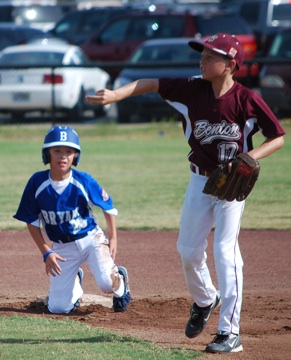 Benton threatened in the third when their leadoff batter singled to right with one out and then a walk put two men on, but Bryant got out of the inning when Chambers made a sliding snag of a grounder near second, stepped on second and then fired to first for a double play.

In the bottom of the third Bryant sent all nine guys to the plate with the first six reaching safely and scoring. McFarland led off the inning with a deep fly over the right fielder’s head and circled the bases for an inside-the-park homer. McEntire followed with a single to center and went to third when Clontz beat out a bunt for a base hit. Jackson walked to load the bases and the Shepard promptly unloaded them with a triple into the left-centerfield gap. Coppock then reached on an error by the shortstop with Shepard scoring on the play to make it 6-0.

Benton threatened again in the fourth when their first two batters dumped singles into shallow center. McEntire fanned the next batter but then issued a walk to load the bases. With the infield in, Dupree fielder a one-hopper near first and threw to Lessenberry at the plate for a force out. The next batter smashed a grounder off Dupree’s glove near the first base bag that ricocheted to Shepard at second who threw back to Dupree for a 3-4-3 force out to end the inning. 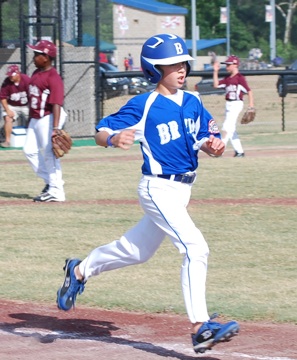 In the home half of the fourth, Dupree smashed a single to left and took second when the left fielder mishandled the ball. McEntire walked and then Lessenberry singled up the middle to load the bases. Jackson’s grounder back to the mound forced Dupree at the plate and then Shepard flied to right for the second out. Grant hit for Coppock and drilled the first pitch to center to score two and put runners on second and third after a poor throw from the center fielder. Catton then singled to center scoring Shepard and moving Grant to third, with Catton taking second on the throw. Greiner hit for Bariola and dropped a two-run single into right to give Bryant an 11-0 run-rule win.

Next up for Bryant is the State Tournament which begins in Lake Village on Friday, July 8. 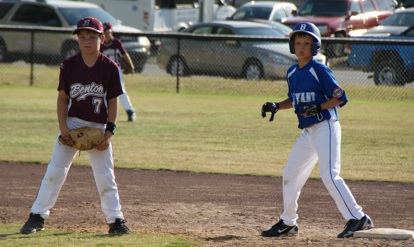 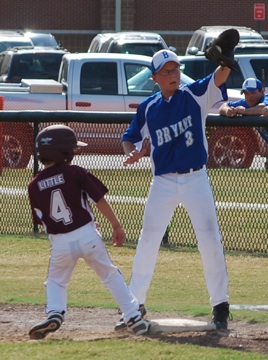