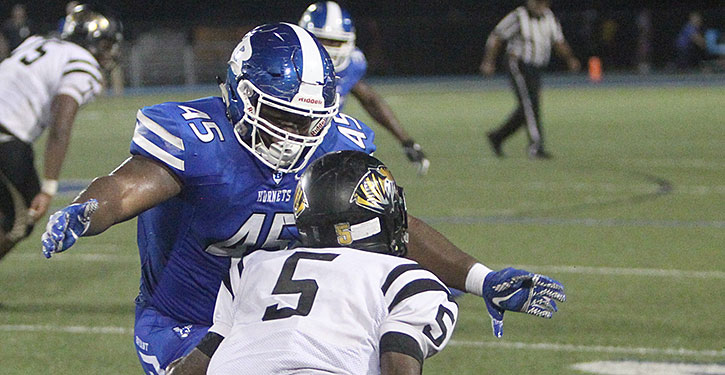 In the Bryant Hornets’ championship season in 2018, a quartet of senior players in the heart of the defense developed into such playmakers that they’re now preparing for their freshman seasons in college programs. Tackle Kajuan Robinson, end Nate Wallace, cornerback Andrew Hayes and linebacker Jakob Neel have graduated. Players with just as much impact may emerge but, as the season begins, the Hornets’ coaches are looking for quality depth to fill the void.

It helps that the Hornets have a few guys that have shown they too can make plays. Defensive end Austin Bailey, linebackers Daylon Land and Catrell Wallace, and safety Temaurion Wilson started all last season and each stepped up at key moments.

“Obviously, we lost two guys up front that kind of made everything right even when it’s wrong,” acknowledged Hornets defensive coordinator and secondary coach Quad Sanders. “But we’ve got numbers. We can win by numbers. On the defensive line, we have eight or nine guys that can go. Change-of-speed guys, we’ve got some guys that can two-gap. We’ve got some guys that can really run.
“Then linebacker is probably going to be the strength of our defense as long as everybody can stay healthy,” he continued. “We’ve got about six or seven guys that can roll in right there. Our first three are really, really good. They’re older guys who have been in the system, three-year starters for the most part. It’s the most experienced group on the field, no doubt.

“As a whole defense, I think we can run,” the coach concluded. “We’ve got to be able to cause some havoc up front and our linebackers are going to do a good job making it right.”

“They’ll be the guys I’m really leaning on,” said Hornets defensive line coach B.J. Schuler. “Then we’ve got some unproven guys, a whole lot of guys. I have a lot in the rotation, some seniors, some juniors. Hopefully, they are ready to step up to the challenge. They have some big shoes to fill from last year.”

Asked what he needs to see from the group, the coach said, “Effort and attitude. They’ve got to have a positive attitude, ready to go to work, and I need them to go out and ball out for as many plays as they can then get ready to get subbed in, get a breather then go back out and ball out again. We’ll definitely have a lot more that play that we did last year. So, while they may play less plays, I expect more intensity while they’re in there, more production.

Some may be better at stopping the run and others at rushing the passer.

“I think we can do a little bit of both depending on who’s in at any certain time,” Schuler said. “Certain guys can do both then other guys will be situational guys for short-yardage in particular versus longer yardage and rushing the passer.”

“I feel like we are the deepest part of this team, a lot of experience returning, a lot of valuable reps in practice have been earned by a lot of kids in this group,” he related. “You’re looking at four seniors, whether it’s our okie package or a base package. You’ll see Tristan Sehika, Daylon Land, Cameron Scarlett and Catrell Wallace rotating in at some point early on.”

Wallace, at 6’6”, 215 pounds, is probably the most highly-recruited among Bryant’s senior players, garnering several Division I offers.

“The junior class has got three or four guys that I feel very confident in, in getting not only just plays or series and helping us rest,” Queck mentioned. “I have all the confidence in the world that they’ll make the play or do what they’re supposed to do. They just need that valuable experience those seniors have.

“You have Hart Penfield. He can go outside or play inside. I’ll use him both ways. You have Koby Melton. He’s an outside backer, kind of has some length to him. He’s a go-getter. Then you’ve got Connor Coleman. He’s got some sneakiness about him as far as making tackles. He’s very aggressive as well and that’s a good characteristic.

“We lost Brayden Godwin,” the coach noted of the linebacker moved to help on the line, “but I do foresee us using him at some point in the season as a back-up mike backer. It’s next man up. It’s whatever’s best for the team.”

Sanders’ secondary is anchored by a pair of experienced players with Wilson at safety and Darrick Rose at corner.

“I think we’re six or seven deep in the secondary,” Sanders said. “Guys can play multiple positions. Both of the Knox twins, Kyle and Kaleb. We’ve got Jordan Hunter, Damian Constantino, Preston Garrett, Austin Schroeder and Christian Cain as well as LaQuav Brumfield. That’s a lot of guys for two spots.”

Garrett is a move-in from Texas with lots of promise.

“He’s really, really good but he’s got to learn the system first,” said Sanders. “He’s going to be able to help us somewhere down the line. He’s a 600-pound squatter. A safety; a kid that can run.”

Strategically, the coach said, “Our guys are really comfortable playing ‘man’. Obviously, you don’t want them to see ‘man’ the whole game. That’s an easy game plan for any offense.

“We’re good at communication as well so we’re going to go from ‘man’ to zone, from zone to ‘man’. I think communication is the key overall. That would probably be our greatest weakness if we don’t do it. When we communicate, we’re really good. Communication helps our confidence even more.

“As a group, I think they really work well together no matter the combination of guys,” he concluded. “I’ve got guys going from corner to safety and safety to corner and we never miss a beat in terms of knowing where to be and knowing how to play proper technique when you’re in a certain position.”

“We’ve got some other seniors, Hunter Stallman, Christian Motes, Eli Rickart, and you’ve got a sophomore in Gavin Burton, who have done a lot of good things.

“After our second year with Coach James — that first year, we were very talented. The second year, we were very talented, but we experienced some big-time injuries. We looked at ourselves in the (season-ending) Bentonville game and we had two backers that had played valuable experience. What it turned into was a guy couldn’t go inside or out. They were stuck at a position. Well, I vowed never to let that happen again and I made guys have to learn both sides and a couple of them learn the inside so you, basically, gain two guys for one if that’s the case.”