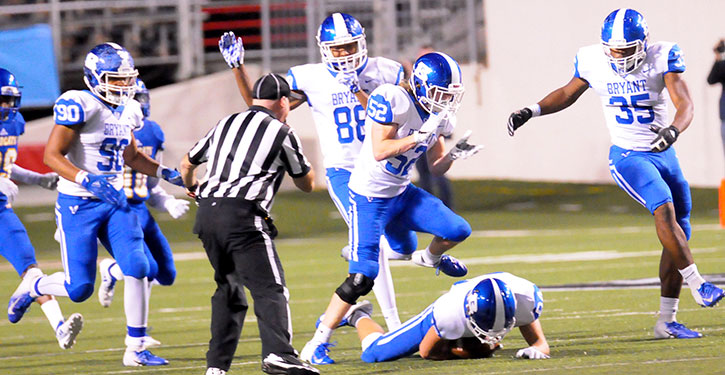 Though many may have anticipated it, hoped for it, no one knew what was ahead for the Bryant Hornets and the Benton Panthers at the 19th renewal of the Salt Bowl in 2018. The anticipation and the fact that the game was played on Saturday night led to a record crowd of over 38,000, most of whom wound up rushing out of War Memorial Stadium in a panic early in the third quarter when the fear of gun shots in the stands or under the stands or somewhere, led to the cancellation of the rest of the game.

Lots of extra precautions have been installed to prevent such a concern this season. The game has been moved back to Friday when several other contests around the state will be played as well. Still, chances are, the crowd tonight may not be nearly as large.

As their run to the State finals indicates, the Panthers are back to their former glories. But Bryant continues to be as good as it’s ever been.

It could be a wild one like the 2017 game in which Bryant held on for a 49-42 win with the final play ending less than 10 yards away from a potential tying touchdown.

James wants his varsity team to take a cue from the junior varsity, which opened its schedule last Monday with a 34-0 win over the Pine Bluff JV.

“Those guys went out there and played their guts out and imposed their will on those guys quickly,” he said. “I think that’s what we’ve got to do (Friday), go out there and play at a high level with a lot of intensity, a lot of focus, a lot of discipline really early and consistently.”

Bryant offensive coordinator Kirk Bock said of the Panthers, “They’re very physical up front. We’ve got some physical kids but they’re untested kids. It’s just, can we get down in the trench with them and dig it out. If we can do that, we’ll be fine. If we can’t then it’ll be a long night.

“Benton’s always been very well-schooled,” he added. “When they get some players to put on top of that schooling (like recent years), it makes it tough on anybody.”

Added Hornets’ defensive coordinator Quad Sanders, “The biggest thing is going to be their RPO’s (run-pass option). They’re an RPO team. They have to have success running the ball to be successful passing the ball like any other offense in the world. There’s no secret. But I really think they rely on, can you play downhill? Then they try to get over the top or they try to get your linebackers to suck up then hit in behind them on a lot of RPO stuff.

“They’ll have a heavy screen game,” he added, “try to get you sideline to sideline. Eye candy with the motions and all that.

“But, for the most part, I think what they do on offense is a really good scheme,” Sanders related. “They do multiple things but it’s all going to start from the run game for them. They’ve just got to have success running the ball. Of course, any defense in the world is going to try to stop the run first then see what happens from there.”

“They’re talented,” James reiterated. “The quarterbacks can run. One can run and throw. The other throws really well. They have a big offensive line, big defensive line. They’ve got big linebackers. They’ve got some speed at receiver.

“They do a lot of good stuff,” he continued. “I mean, heck, they’re a good football team. They’re going to win a lot of football games.