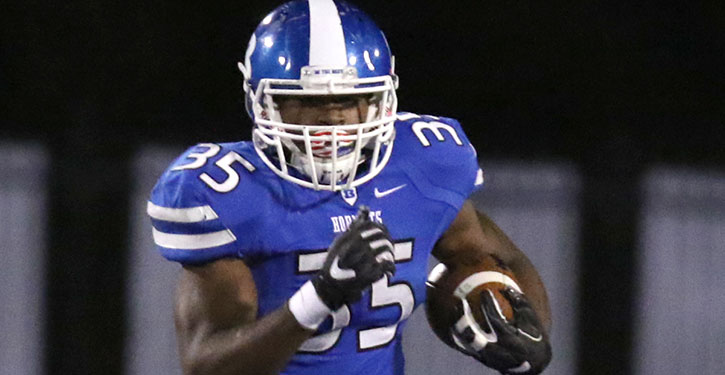 Of the five returning starters on offense for the defending 7A State champion Bryant Hornets, four of them are skill players — receivers Jake Meaders, Tre’vun Herron, Hayden Schrader and River Gregory. Running back Ahmad Adams played a lot and so did quarterback Austin Ledbetter, who played a key role in the 27-7 win in the championship over North Little Rock last year.

An offensive line that had some question marks before the season evolved into one of the best ever for a Hornets’ team but four of those guys, plus the top sub, graduated. Only Tanner Wilson returns.

So, much like last year, the Hornets’ inexperience on the offensive line and its development this season will have a major role in how far the team can progress in hopes of back-to-back State titles.

“It’s been rough at times but, probably about three weeks ago, they finally started understanding the pace and the physicality that we’ve got to practice at every day,” he continued. “For the last three weeks, they’ve been moving in the right direction and taking care of the little things. We don’t have near as many mental busts. We’re always trying to shore up our technique. That’s something they’ve been focusing on a lot and it’s starting to show with better play when we watch film with them. We’ll see what happens when the lights go on.

“Tanner’s going to be our leader up front,” the coach acknowledged. “He’s going to start off at left guard. Devin Pitts (a transfer from North Little Rock) is going to play center and we’re eager to see what he can do on Friday night.

“Ty Johnson’s going to start at right guard,” said Clancy. “Ty’s been working. We’re going to see if he’s going to make the most of his opportunity. Reese Dawson’s kind of in the same boat as Ty. They’ve been working. It’s his turn at right tackle. He’s going to get the first go at it. Reese and Ty are big bodies and, if they get their feet moving and play with good technique, they’re going to move some people.”

“Will Diggins is a sophomore that’s going to start at left tackle,” Clancy said. “He’s 6’3”, 240, really athletic, and he’s really attacked the challenge since he got out of basketball. We’re looking forward to seeing what he can do.”

In addition, the coach mentioned, “Jason Shifflet (6’0, 275, sophomore) and Brooks Edmonson (6’4”, 260, sophomore) are probably going to get some playing time Friday night to spell those guys, kind of how we rotated some guys last year. Gage Alexander (6’3”, 230, junior) and Jack Powell (6’1, 230, junior) and Parker Elswick (6-0, 240, junior) will probably see some playing time throughout the year. Those guys just keep working and getting better.”

Those guys will be challenged by opponents who will want to test them by blitzing. Pulaski Academy did in their preseason scrimmage last week and, no doubt, Benton will in the season-opening Salt Bowl this Friday.

“We’re just hammering in, make sure they communicate and understand the protection, the run scheme that we’re trying to do, that they take the right steps and the right technique,” Clancy related. “They should be able to pick it up.”

Protecting Ledbetter will be the aim. The 6’1”, 190-pound junior showed flashes of exceptional ability during the 2018 championship run. He wound up completing 33 of 68 passes for 549 yards and four touchdowns with just two interceptions.

Bryant offensive coordinator and quarterbacks coach Kirk Bock is looking forward to seeing what Ledbetter can do fulltime with a year of experience under his belt.

“We can be versatile as far as what we’re trying to do,” he said. “He runs it well. He reads it well. And he can throw it.

“One of the things that makes him fit in well with us is he throws from different arm angles,” Bock noted. “If you can get to where you can do that, you can get yourself out of a lot of jams.”

The coach likes the way Ledbetter leads, something he showed even as a sophomore.

“He’s got confidence,” Bock said, adding of his work in the huddle, “He knows when to bark at them. Then, he knows when to calm them down. That’s what he’s shown so far in fall camp and in our scrimmage against P.A. He’ll get in your kitchen, but he doesn’t live in your kitchen. He just reminds you of what you’ve got to do. The good thing about that is, he can stand behind them because he’s going to do his job.

“They’re all going to make mistakes and Austin will be the first one to tell you, he’s going to make some mistakes,” he allowed. “But his mistakes are coming at 100 miles an hour. Everybody can live with those kinds of mistakes.”

Ledbetter’s top receiver in the scrimmage with Pulaski Academy was senior Jake Meaders, who caught nine passes for nearly 200 yards. Last season, he led the Hornets with 46 grabs for 597 yards and five touchdowns.

Meaders played quarterback as a sophomore and has returned to that spot as Ledbetter’s back-up along with junior Austin Schroeder.

“Jake takes about a fourth of the reps in practice every day,” Bock mentioned. “He played a lot (at quarterback) in our 7-on-7 stuff. He’s throwing it fine.”

Another big hole for Bryant was left by running back LaTavion Scott, who was the State finals MVP and, in two seasons as the starter, rewrote much of the Bryant record books for rushing.

“(This year’s) guys aren’t LaTavion Scott,” said running backs coach Adam Pendergrass. “They’ve got to be their own person and each one of them brings something a little different to the table. They’ve got to be able to use their skills to the best of their ability.”

The starter will be Scott’s primary relief last year. Ahmad Adams is a senior with size (6-1, 235) and speed.

“We’ve got big expectations for him,” said Pendergrass. “We expect him to run like a man because he’s built like one. He’s got to get downhill and he’s got to do a good job of reading blocks, and catch the ball out of the backfield.

“People are going to have to tackle him for four quarters and, I mean, that’s a load for a guy that’s just big and strong,” he added. “He’s just got to keep plugging away, getting downhill and get the yards he can get. Then, once stuff opens up, he’s got the ability to go the distance.

“But, also, Tre’vun Herron will rotate some at running back then Xavier Foote and Tayvin Jones have gotten better every week,” the coach said. “We feel like those guys right now could come in and get quality reps during the game. And we need them to, just so we can keep people fresh. Because we want to play fast and do what we do and get a bunch of snaps. Those guys have just got to protect the football and keep running hard and understand pass protections.”

Though perhaps not as noticeable as his running, that’s something else Scott did well, add to the pass protection.

“Ahmad has done a really good job of picking up and blocking, just being a bigger back,” Pendergrass said. “And Foote and Tayvin, the more reps they get the better they have gotten. It’s just taking them getting game-speed reps and getting out there and going.”

Along with Meaders, Gregory and Schrader were among the Hornets’ top four in receptions last year.

“We’ve been working in a bunch of guys,” said Bryant receivers coach Julian Jones. “Tre’vun, Drake Findley and River Gregory, obviously Schrader and Meaders. Those are going to kind of be our core guys.

“We’ve got Myles Aldridge coming back from an injury deal so we’re not sure how much of a role he’s going to have yet,” he continued. “It’s more about getting him in shape right now.”

“We’re going to do a rotation,” Jones said. “Last year, we kind of did it by series. We’re going to try to do that again this year. That way we’ve got fresh legs all of the time and we can take shots at any point in time during the game. Effort should never be a question. We should get everything they’ve got every play.”

That experience and depth make receiver one of the strengths of the offense.

“Skill positions on offense is one of the strengths,” Jones agreed. “You take a guy like Tre’vun Herron, who also plays at running back. You can stick a guy like that back there. He can house it at any time he touches the ball.

“We’ve gotten a lot better catching the ball,” he added. “Our route-running is something that we’ve tried to hone-in on this year. At times, last year, we could kind of almost just run to spots instead of running our routes. So, we’ve really focused on being crisp coming in and out of breaks and then, obviously, finishing plays.

“We’ve got a lot of speed that we can stick out there. That’s a huge plus this year.”

The Hornets should also be solid on special teams. Ledbetter is back as the punter and Brock Funk, who stepped into the fire as a sophomore during the playoffs and booted 9 of 10 extra points, returns along with much of the coverage and return squads.

“A bunch of those guys have been on our special teams the last two years,” said Pendergrass. “They do a really good job. Tristan Sehika does a really good job; Hart Penfield, Braden Godwin, Koby Melton. Those guys play with a lot of effort.

“Hayden Schrader’s done a great job of stepping in and snapping on punts,” the coach said. “He’ll probably do extra points too.

“Ledbetter’s only gotten better,” he continued. “We saw him get better as a punter throughout the year last season and he gives us a threat back there, throwing the football and providing another aspect to it.

“Funk came in and did a good job handling kicking duties,” Pendergrass added. “He’s gotten into the weight room and gained about 40 pounds and got a lot stronger. He’s done a good job kicking the ball. We’ve set high expectations for those guys.”

The sure-handed Meaders will return punts again this year with some help at times from Darrick Rose. Herron returns kickoffs.

“We expect to be the best special teams on the field,” Pendergrass asserted.