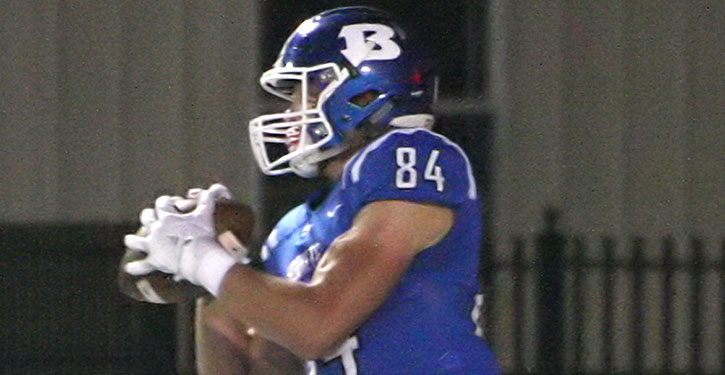 Over the last two weeks, against the second and third best teams in the 7A-Central Conference, the Bryant Hornets have set a school record for passing yards in a game (534 against North Little Rock) and rushing yards in a game (392 against Conway) on the way to wrapping up a second consecutive league championship.

Ordinarily, they’d get a bye in the first round but because of the ravages of Covid-19, the Arkansas Activities Association cleared the way for all 16 teams in Class 7A to play in the postseason, if they elected to.

But the Rogers Heritage War Eagles will play the Hornets tonight. The eight seed from the West is 1-9 on the season. That victory in a non-conference game in Springfield, Mo., snapped a 25-game losing streak. The War Eagles are now 3-57 over the last six seasons.

There are plenty of folks who think the War Eagles should just stay at home too. But, it’s a chance to practice for another week, a chance to be in the playoffs for the first time and second-year head coach Steve Hookfin wants his Heritage team to play.

Bryant head coach Buck James said, if he was in Hookfin’s place, he would do the same.

“If I was them, I would want to play,” James said. “I would want to see what a championship caliber team looks like. I would want to be able to make that trip, feed them good, leave early, let them enjoy each other as teammates and have some fun. I want to come down here and play, and see how a team that’s been good the last few years operates. How they carry themselves. How they play, the intensity level, the focus, discipline — everything that goes on.

“I would want to mimic, copy, emulate, everything that I saw to try to instill in our kids, in our community, what it would take to be successful,” the coach emphasized. “You know, it ain’t always about winning football games. Sometimes it’s about learning, getting better, finding ways to improve yourself. We’re doing that on our end and I’m sure that coach is talking about what they’ve got to do on their end to try to get where we’re at.”

James would also rather have his team play than have a bye.

“I’m glad we’re playing,” he asserted. “I think it keeps us in routine and, especially with all the uncertainty about where kids are at. Kids need structure. They need consistency. They need every day to be a routine.

“I think that’s the best thing for us this year,” the coach said. “We’ve already had two open dates (one scheduled and the other forced by a virus breakout at Little Rock Central). That’s plenty. Let’s play football. That’s what we signed up for.

“I think, at the end of the day, the kids just want to play,” he added. “The heck with seedings. The heck with the getting byes and stuff like that. Let’s play next guy up and make it an important game and try to move on from this thing. There are only four weeks left, so let’s play them all.”

The Hornets figure to get playing time for a lot of players, including perhaps some freshmen.

“We’re going to dress 100 kids you know,” James said. “We’re really basically dressing three deep. We expect to play a lot of kids. We expect our kids to play well. We expect them to be disciplined in what they’re doing and try to improve and create depth.

“We don’t know from one week to another who we’re going to have and who we’re not going to have,” he related. “Some of these guys who hadn’t been in the mix all year might be guys that are playing to help us win a State championship as early as tomorrow.”

James has told his team repeatedly this season to cherish every opportunity to play. Now, Bentonville West’s misfortune serves as an example of how a season can be over in a blink.

“I think that covers the whole realm of what it takes to be a champion. Doing what they do and doing it how they had to do it during each and every week.”