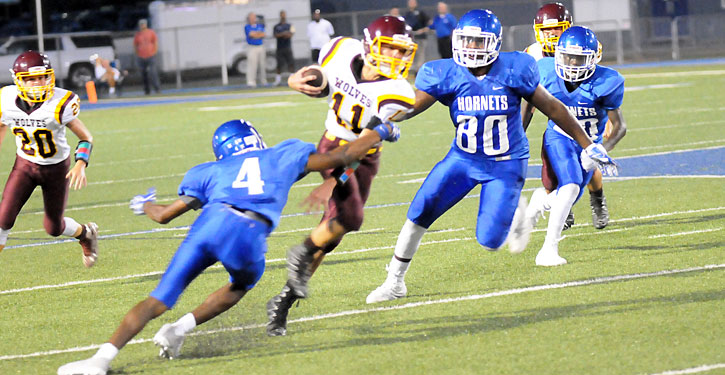 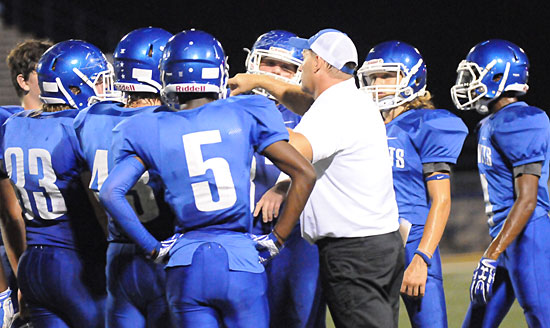 Through their first two games this season, the Bryant Hornets freshman football team had outscored its opponents by a combined 61-6 in the first half. But, on Thursday night, against the Lake Hamilton Junior Wolves, the game was scoreless going into the final minute of the half.

But when Ahmad Adams, who already had a 99-yard touchdown run whittled down due to penalty, blew through the defense for a 50-yard score with :48.5 showing on the clock, it opened the floodgates.

The Hornets, thus challenged, erupted for 30 points in just the third quarter to turn the hotly-contested battle into a romp that ended with Bryant improving to 3-0 on the season with a 36-6 win. 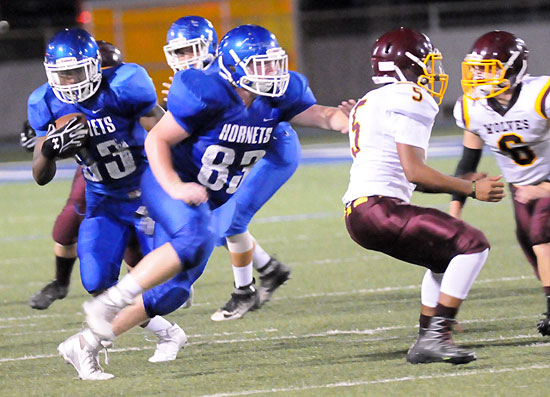 Ahmad Adams (33) follows the blocking of Tanner Wilson (83) as he turns upfield. (Photo by Kevin Nagle)

Adams, despite having half of that 99-yarder discounted, wound up rushing for 189 yards and three touchdowns on just nine carries. That’s over 20 yards per touch.

The first half, however, the Hornets got their first taste of adversity. Lake Hamilton, playing a double-wing formation, pounded the ball and chewed up time. Though the Wolves’ first possession was three-and-out, after they punted to Bryant, the Hornets fumbled on the first snap and Lake Hamilton’s Deadlond Lewis recovered at the Bryant 45.

Three plays later, off a pitch sweep, it appeared that the Wolves’ Braden Braughton broke a 35-yard touchdown run only to have it negated by a holding penalty. They came back with the same play and again Braughton broke loose. He raced 30 yards but this time Bryant’s William Boyd stopped him at the 16. 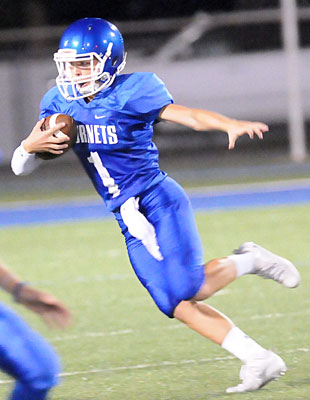 The Wolves got to the 6 but a false start cost them and, after runs were stuffed by David Shiflett then Catrell Wallace, a fourth-and-goal pass by Bradyn Clark was picked off at the 1 by Darrick Rose.

Adams set sail on the first snap from there but an illegal block wiped out half of the run. A play later, Adams and quarterback Jake Meaders missed connections on a handoff and Lake Hamilton’s Matthew Novak recovered.

Two plays into their possession, the middle of the Bryant defensive line crashed through on a dive play to fullback Malik Brewer and knocked him back. The play was whistled dead but Clark had pulled the ball and headed downfield unscathed to the end zone. Of course, Bryant’s defense had relaxed at the sound of the whistle.

In a strange decision, the officials decided to negate the play — basically, made it a do-over.

The Wolves overcame a procedure penalty to pick up a first down at the Bryant 25. But, on first down, Brewer was knocked for a loss by Peyton Dillon. After a timeout, the Wolves tried to run a pitch-sweep but Clark’s toss toward Braughton was off-line and hit the ground. Wallace charged in an claimed it for the Hornets with 2:34 left in the half.

That led to Adams’ scoring run, which made it 6-0 at the half. 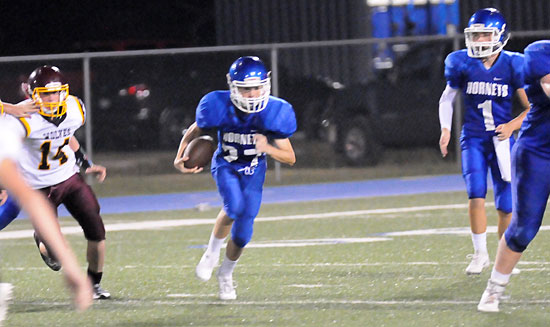 “They had the football the whole first half,” acknowledged Hornets coach Kenny Horn. “We dumped two of our possessions. We had it three times, scored on one and dumped the other two.

“We just didn’t execute,” he asserted. “We weren’t mentally prepared. We talk about mental preparation all the time and it didn’t happen. Fortunately, we were able to overcome that. But, you know, sometime later this year we won’t overcome that

“We had a lot of stupid penalties, turnover issues, moving before the snap,” the coach noted. “That’s stuff we can clean up. Other than that, our execution was good.”

In the third quarter, the Wolves were held to one first down and it came via penalty.

“We didn’t change anything,” Horn said. “We just had to fix some technique issues in there at halftime. I told them, ‘Stay calm, come out here and execute and you’ll win the football game. And we did.”

Bryant’s 30-point barrage began on the second snap of the third quarter when Adams galloped 67 yards for his second touchdown. He also ran in the two-point conversion.

On a third-down play for Lake Hamilton, moments later, Brewer headed around left end trying to get the 3 yards needed for a new set of downs. As he turned the corner, he met Rose, who made contact and yanked the ball away from the Wolves’ running back. Rose sprinted down the sideline 45 yards to the end zone. And with Gavin Wells’ two-point run, it was suddenly 22-0, less than halfway through the third quarter.

Stops for losses by Tye Johnson and Wallace led to a punting situation for Lake Hamilton. But a bad snap undermined the effort of punter Jordy Morales, who tried to run with the ball only to be dropped by Wallace at the 12.

It took two runs by Adams but he, again, cashed in behind the blocking of offensive linemen, Taylor Martin, Brantley Thomas, Emil Pritchard, Tanner Wilson and Hudson Trusty.

With an extra point kick by Grayson Scoles, the Hornets’ advantage built to 29-0.

But, on the subsequent kickoff, Brewer streaked 70 yards for a touchdown to get the Wolves on the board. An extra point attempt was wide.

And it didn’t take long for the Hornets to answer. After a strong return of the kickoff by Rose, Adams picked up 6 yards then Meaders shot 56 yards on a keeper for Bryant’s sixth TD of the night. Scoles booted it to 36-6.

In turn, the Wolves picked up a first down by penalty but couldn’t add a second one. A punt resulted in a 39-yard return by Christian Cain that would’ve had Bryant setting up shot at the Wolves’ 30. But an illegal block negated the run. With reserves filtering in, each of the two teams had a final possession before time ran out.

After three home games to start the season, the Hornets hit the road next Thursday to play a tough opponent, the North Little Rock Junior Charging Wildcats. 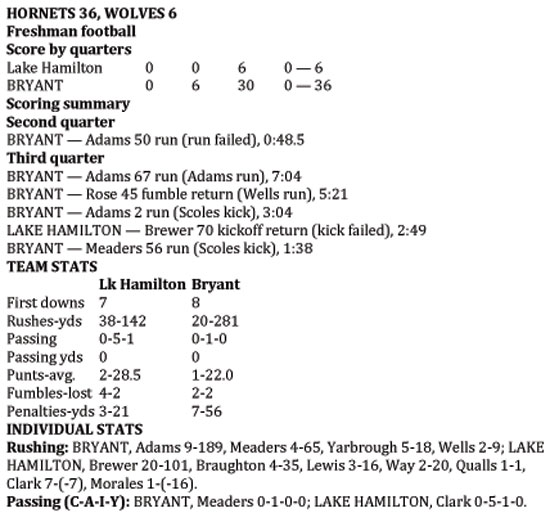