Another dramatic comeback lifts Hornets to victory at Catholic

LITTLE ROCK — Nothing was going the Bryant Hornets’ way Friday night at the old gym at Little Rock Catholic High School, a scene of plenty of frustration over the years for Bryant teams. 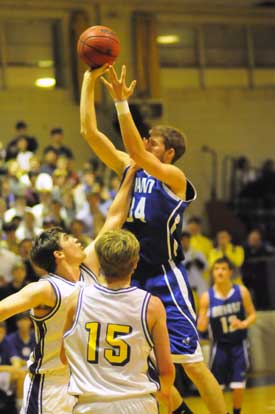 After scorching the nets for 13 three-pointers in their home win against Little Rock Central the week before, the Hornets missed their first 12 long-range shots against the Rockets and wound up just 1 of 14.

Bryant fell behind in the second quarter, something you never want to do against a well-drilled Rockets team. Getting behind Catholic in basketball is like getting behind Cabot in football. They milk the clock, shorten the game and limit an opponent’s opportunities.

The Hornets trailed by as much as 11 in the second half. It was 29-19 going into the fourth quarter. But Bryant ratcheted up the defense in the final period and, for the second time this year, erased a double-digit lead on the way to victory.

The game was tied 37-37 with 1:46 left to play. Catholic’s Carter Morse had hit a free throw to knot it up. He missed the second but his brawny teammate Matt Morris hauled down the carom, his 10th rebound of the game.

But, in clearing space with elbows high, Morris flattened Bryant’s Quinton Motto. It was the third time, Morris had been cited for an offensive foul at Motto’s behest but it was his fifth and final foul overall.

So, the game’s leading scorer went to the bench with his 11 points. 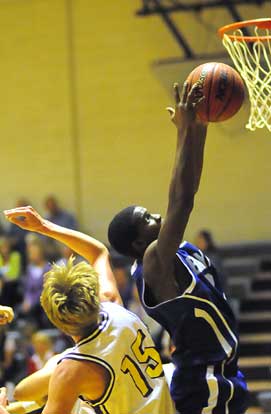 The Hornets, after working their offense, gained the lead for good when Marcus Wilson fed Anthony Black for a basket inside.

The Rockets rushed up the floor and Carson Case flew into the lane for a shot but there was Motto again to take a charge. A free throw by Brantley Cozart made it a 3-point game with :18.4 to go.

Catholic got a couple of looks at a tying trey but neither shot would go down as Bryant held on for a thrilling 40-37 victory.

At 12-8 overall, the Hornets improved to 4-4 in the 7A/6A-Central Conference to keep their share of third place going into a home tilt with Van Buren.

Earlier this season, the Hornets had come from 16 down to win at Conway.

“Their character is the first thing,” said Bryant head coach Mike Abrahamson of his team when asked what goes into these come-from-behind wins. “They allow me to keep coaching them in those situations when it would be very easy to give up or get distracted or think about the last missed shot. They still listened during timeouts. They still listened when they were on the court. It was really loud in there too. 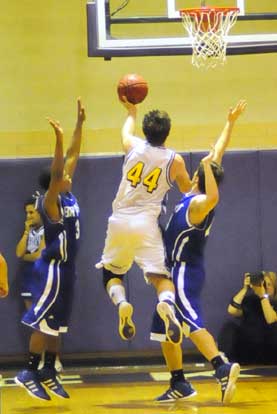 But playing the Rockets at Catholic — with the way they spread the floor, trailing by 11 is almost the equivalent of getting behind a faster-paced team by 22.

“That’s the thing, you don’t want to play Catholic when they have the lead because they are so good at holding it,” Abrahamson concurred. “But we didn’t have a choice but to come after them. We came after them as hard as we could and we got them to throw it away a few times, we got them to travel a few times. And we finally started making a few shots on the other end. It just kind of snowballed from there.

“To me, that kind of makes this win a little more impressive,” he mentioned. “I remember last year playing them at our place. We had to start fouling with like three-and-a-half minutes to go because that was our best defense. They were so good at holding it. We were just chasing them all over the place.”

This time, Bryant wound up forcing 23 turnovers and, after converting just 8 of 27 shots through three quarters, the Hornets caught fire down the stretch. They were 9 of 11 from the field in the final period.

The Rockets out-rebounded them 25-14 and Bryant only shot seven free throws to Catholic’s 15. 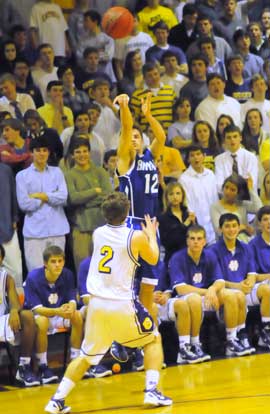 The Rockets didn’t actually score in the game until the final minute of the first quarter. But, because of cold shooting and the pace of the game, the Hornets had only been able to muster a 4-0 lead at that point. Zach Reiners broke the ice for Catholic then Bryant’s Zach Cambron and Case traded buckets to make it 6-4 going into the second period.

The Hornets were frustrated in part by the Rockets’ triangle-and-two defense. Catholic played tight man defense against Bryant’s senior guards Brantley Cozart and Jordan Griffin. They held them to 8 and 7 points, respectively, in the game. But Black scored all 8 of his points in the fourth quarter to help take up the slack. Motto added 6 points all in the first half. Cambron stepped up with 7 points and Greyson Giles, getting his first significant varsity action, contributed 4.

The Rockets scored the first 6 points of the second quarter and wound up maintaining and expanding their lead with the help of a 7 of 8 performance at the free-throw line.

Motto’s eight-footer had the Hornets within 13-12 but Morris scored off the offensive glass and Greenwood added back-to-back buckets to make it 19-12.

A layup by Giles off a nice feed from Black had the Hornets within 5 at the half.

And when the second half started with a three-point play by Morris, a stickback by Reimers and a free throw by Morse, the Rockets held a 25-14 lead.

Cambron scored inside to break the ice for the Hornets and, moments later, added a basket as he was fouled. It was Morris’ third infraction and Cambron completed the three-point play to make it 25-19.

Baskets by Morse and Greenwood pushed the lead back to 10 going into the fourth quarter but, between them, Motto took a charge that produced Morris’ fourth foul.

The 6-7 Motto blocked a shot by Greenwood when the Rockets had a chance to expand the lead further at the start of the final period. Cozart took advantage with a driving layup and, after Reiners hit a free throw, Cozart scored again to trim the margin to 30-23.

With the Hornets pressing and trapping whenever possible, they forced another turnover. This time, Griffin pulled up in the lane and popped a short jumper to make it a 5-point game.

The Rockets called timeout with 5:48 left to play, trying to stem the tide. Morris returned and when the Hornets’ defense collapsed on him, Reimers got a layup.

But a drive and pull-up by Black got the Hornets going again. Cozart cashed in another turnover with the Hornets first and only 3-pointer on their 13th attempt. With lead down to 2, the Hornets forced another Rockets’ miscue and Black canned a 12-foot jumper to tie it. And he followed up with a steal that Griffin turned into a three-point play with 3:21 left to play, producing Bryant’s first lead since the end of the first quarter.

Reiners tied it with a layup and a Bryant turnover was cashed in by Morris, giving the Rockets a 36-35 edge. And when Griffin got into the lane and slipped on a wet spot, Catholic got a chance to up the advantage when Griffin was called for traveling.

Trying to beat the Bryant press, the Rockets tried a trick play on the inbounds. With Morse inbounding initially, Morris stepped out of bounds up the baseline and took a pass from Morse then got the ball right back to his teammate. But a violation occurred and the Hornets got the ball back under their own goal.

Moments later, Black drove for a layup to make it 37-36 before Morse tied it at the line, setting up the dramatic finish.