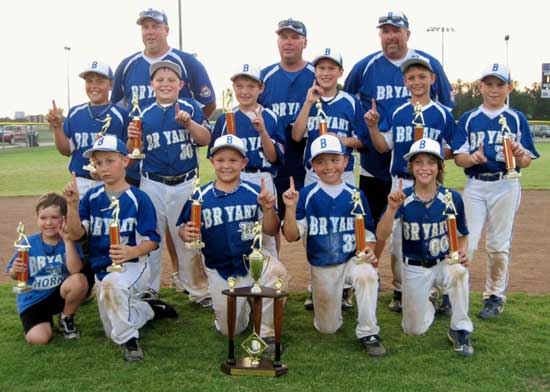 JONESBORO — By outscoring the opposition by an impressive[more] 45-4 over four games, the Bryant 9-year-old All-Stars roared through a tournament in Jonesboro to capture the championship.

Bryant whipped Batesville 10-0 to open the tourney on Saturday, June 18, then eased past the Northeast Arkansas Venom on Sunday morning 11-0. They advanced to the championship game by ousting Batesville, 13-3, then captured the crown with an 11-1 win over Sikeston, Mo., Sunday evening.

James and Lester combined to shackle Sikeston, allowing one unearned run on six hits in the five-inning finale. LaRue led the offense with three hits including a solo homer to start the game.

Bryant went on to score in each of the five frames. Following LaRue’s blast, Hilson was hit by a pitch and Lester drove him home with a single. James drew a walk and, with one out, Lester scored the third run when McKim grounded into a force at second.

An error and a two-out hit produced the lone run for Sikeston in the bottom of the inning but Bryant countered with two in the top of the second. A walk to Meaders started the inning, An out later, Morales and LaRue lashed back-to-back doubles to make it 5-1.

James pitched around a two-out single in the bottom of the inning and Bryant’s bats went back to work in the top of the third. Drennan reached on an error and, with one out, Small and Meaders drew walks. Drennan and Meaders wound up scoring.

After a lead-off single in the bottom of the third, Bryant turned a doubleplay and, after a single, James ended the inning with the second of his three strikeouts.

Bryant’s fourth started with a walk to Morales and a bunt hit by LaRue. With two down, James chased both of them home with a triple to right. Consecutive walks to Drennan, McKim and Small forced in LaRue, making it 10-1.

Sikeston threatened in the bottom of the fourth. After two were away, a single and a pair of walks loaded the bases. But Lester got the final out to send it to the fifth.

Meaders and Hall each reached on errors to start the fifth and Meaders scored to set the final score. In the home half, Lester allowed a lead-off hit but then struck out the side to finish with a flourish.

Lester, Meaders and Drennan combined on the mound to baffle Batesville on two hits in the semifinals. Lester worked into the third, holding the opponent without a hit until a bunt single to start the third. A pair of errors contributed to the three-run inning and Meaders came on to get out of the jam. Drennan pitched a scoreless fourth to finish up.

The Stars took a 2-0 lead in the bottom of the first when LaRue reached on an error, Hilson sacrificed him to third and Lester beat out a bunt single. Lester would eventually score as well.

In the second, McKim beat out an infield hit and, an out later, Meaders and Hall worked walks. With two away, LaRue’s grounder to short was booted then walks to Hilson and Lester made it 5-0.

After Batesville cut it to 5-3 in the top of the third, Bryant blew the game open in the bottom of the frame. Drennan was hit by a pitch then McKim ripped a double to left. Both scored when Meaders reached second on an error by the Batesville shortstop.

Hall singled and Morales reached second on another error. With two out, Hilson was hit by a pitch to force in Meaders and keep the bases loaded for Lester who cleared the bases with a triple, making it 11-3.

Drennan pitched around a walk and an error, getting a big lift from Lester to start the inning when he tracked down a drive to center to open the inning.

In the bottom of the inning, Bryant made it a run-rule win. Drennan reached second on an errant throw to first then McKim walked. Small singled in a run and Meaders was hit by a pitch. McKim stole home to end it.

A nine-run second blew up a scoreless game and Bryant went on to the run-rule win in four innings as James and Hilson combined on the shutout.

The Venom’s best chance to score came in the first when they loaded the bases on a pair of walks and a single but James left them all stranded when he got the final out. In the second, he fanned the side around a two-out single.

Hilson worked around a lead-off single and an error in the third then retired the first batter in the fourth. After a walk, a grounder back to Hilson resulted in a force out then the final out came when the base-runner was caught stealing.

Bryant was held in the first despite walks to Hilson and Lester. A nifty doubleplay by the Venom third baseman ended the inning.

But, in the second, Bryant unleashed the offense. A walk to Drennan got the outburst started. McKim doubled him home then Small walked and Meaders reached on an error. Hall walked and Morales beat out a bunt hit.

A walk to LaRue kept the carousel turning then Hilson and Lester smacked consecutive singles. And when McKim’s shot to third was misplayed, Bryant had plated nine.

In the home third, Meaders walked and, with two down, LaRue and Hilson belted doubles to set the final score.

Drennan and Lester combined on the four-inning shutout, scattering seven hits. Drennan struck out four and walked two in his three frames. Lester had a walk and a strikeout in the fourth, working around a two-out error to close out the win.

The Stars grabbed a 5-0 lead in the first. Hilson’s one-out hit started the parade. Lester singled to drive in a run. James beat out an infield hit then, with two down, McKim’s double made it 3-0. He scored as well when Kilgore’s grounder to third drew a wild throw. Small doubled in Kilgore to complete the uprising.

Bryant added to the lead in the third. Lester reached on an error then James blasted a two-run homer. With two down, Kilgore got a bunt down for a hit and when a wild throw ensued, he reached third, scoring from there on a wild pitch.

The fourth began with a bunt single by Meaders. He advanced on a groundout by Morales and, after LaRue walked, both eventually scored.