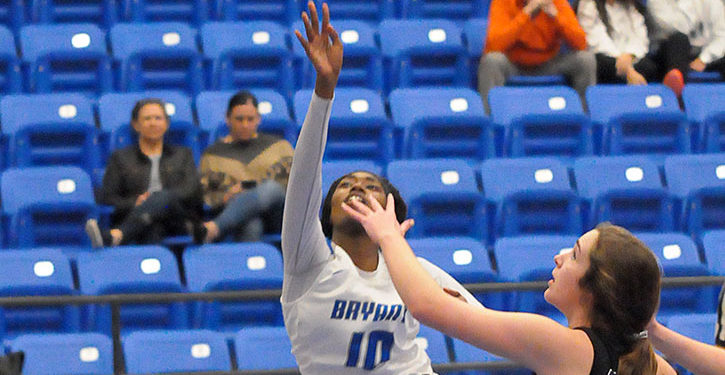 There will be a lot of new faces taking the floor tonight when the Bryant Lady Hornets basketball team hosts the White Hall Lady Bulldogs at Hornet Arena in a preseason benefit scrimmage.

Eight girls who had played plenty of minutes over the last three seasons have graduated. The lone returning starter is junior Parris Atkins, who was among the leading scorers for Bryant as a sophomore.

“We got a lot of young kids, a lot of inexperience,” acknowledged Lady Hornets head coach Brad Matthews. “We have Parris back, who played a significant amount, started most of the year and, boy, she’s taken a big step up for us. After the Covid stuff finally cleared and we got to get back together in June, she’s done really well. Her practice habits are way different. She’s taking a little bit of a leadership role for us. She’s obviously very talented kid with a lot of upside. So, we’re excited about what she has.

“We have three seniors Kaitlyn and Kristyn Wang and Lauryn Taylor,” he noted. “Just quality kids who’ve kind of waited their turn. We think they’ll play and contribute.

“Jordan Hancock is had a really good last month, month and a half,” the coach said of the junior guard. “Shamya Jordan is another junior.

“So, we have three seniors, three juniors and then the rest is sophomores,” he continued. “They had a really good freshman season so we’re looking for them not only to contribute right away but really take the next step to really be able to compete against high level competition that we’ll see here pretty quick.”

The Lady Hornets also have a promising freshman on the team, Brilynn Findley.

“Obviously, we have the best defensive coach in the state in Joanna Scott,” he said of his returning assistant.

“When you’re young and, until you do it, what you can do and what you do are two different things,” Matthews related. “I think the mindset is something that they have to adjust to. There is a competitiveness that happens at the high school level that, while they play hard at the ninth-grade level, there’s just a difference. You know, they’re playing against kids that are two and sometimes three years older than them. There’s a physicality there but there’s also a mentality there. I think we definitely have the ability to do it but how quickly can we come together and put the pieces together.

“We think we have really good pieces,” he emphasized. “They’re just young or in Kaitlyn, Kristyn and Lauryn’s case inexperienced. So, it’s a matter of how quickly can we make the puzzle fit.”